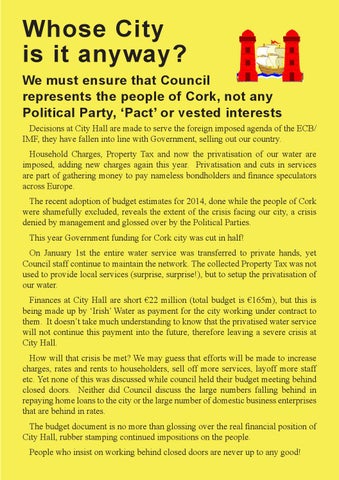 Whose City is it anyway? We must ensure that Council represents the people of Cork, not any Political Party, ‘Pact’ or vested interests Decisions at City Hall are made to serve the foreign imposed agenda of the ECB/ IMF, they have fallen into line with Government, selling out our country. Household Charges, Property Tax and now the privatisation of our water are imposed, adding new charges again this year. Privatisation and cuts in services are part of gathering money to pay nameless bondholders and finance speculators across Europe. The recent adoption of budget estimates for 2014, done while the people of Cork were shamefully excluded, reveals the extent of the crisis facing our city, a crisis denied by management and glossed over by the Political Parties. This year Government funding for Cork city was cut in half! On January 1st the entire water service was transferred to private hands, yet Council staff continue to maintain the network. The collected Property Tax was not used to provide local services (surprise, surprise!), but to setup the privatisation of our water. Finances at City Hall are short €22 million (total budget is €165m), but this is being made up by ‘Irish’ Water as payment for the city working under contract to them. It doesn’t take much understanding to know that the privatised water service will not continue this payment into the future, therefore leaving a severe crisis at City Hall. How will that crisis be met? We may guess that efforts will be made to increase charges, rates and rents to householders, sell off more services, layoff more staff etc. Yet none of this was discussed while council held their budget meeting behind closed doors. Neither did Council discuss the large numbers falling behind in repaying home loans to the city or the large number of domestic business enterprises that are behind in rates. The budget document is no more than glossing over the real financial position of City Hall, rubber stamping continued impositions on the people. People who insist on working behind closed doors are never up to any good!

The People must win the coming Elections! guest speakers include:

Luke ‘Ming’ Flanagan TD Dr. Liam Weeks, Dept. of Government, UCC and speakers from The People’s Convention Representation is the Right of the People, our Constitution makes no provision for the Represenetation of any Political Party, campaign group, individuals or vested interests WE MUST ASSERT THAT RIGHT!

People’s Candidates must contest every seat on City and County Council, we can break the dictate of Political Parties and end their gravy train. Will you step forward to represent your community?

People - Empowerment - Politics - Democracy Every Monday @ 7.30pm, Ionad an Phobail, 99 Douglas St. A Resource Centre working for the Empowerment of the Citizens!

Join in, help build the network ...

Send an SMS text message with your name & area/ townland to 087-9779015 so we can keep you informed. Act now! Tell your friends, Spread the discussion. Published by The People’s Convention, Cork Tel 021-2428310 info@cppc.ie www.cppc.ie http://facebook.com/thepeoplesconvention 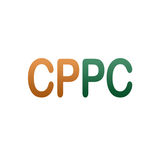 An Chomhdháil Phobail | The People's Convention

Whose City is it anyway?

Commentary on Cork City Council and the financial crisis is faces, characterised by manipulation of Budget figures and the acceptance of the...

Whose City is it anyway?

Commentary on Cork City Council and the financial crisis is faces, characterised by manipulation of Budget figures and the acceptance of the...