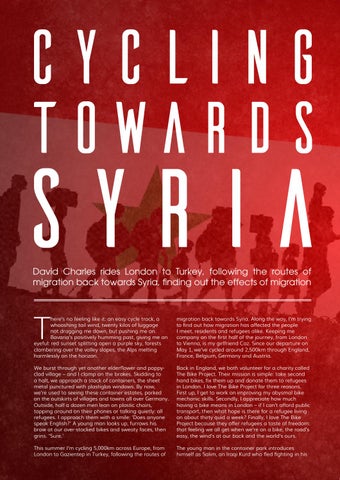 SYRIA David Charles rides London to Turkey, following the routes of migration back towards Syria, finding out the effects of migration

here’s no feeling like it: an easy cycle track, a whooshing tail wind, twenty kilos of luggage not dragging me down, but pushing me on. Bavaria’s positively humming past, giving me an eyeful: red sunset splitting open a purple sky, forests clambering over the valley slopes, the Alps melting harmlessly on the horizon.

migration back towards Syria. Along the way, I’m trying to find out how migration has affected the people I meet, residents and refugees alike. Keeping me company on the first half of the journey, from London to Vienna, is my girlfriend Caz. Since our departure on May 1, we’ve cycled around 2,500km through England, France, Belgium, Germany and Austria.

We burst through yet another elderflower and poppyclad village – and I clamp on the brakes. Skidding to a halt, we approach a stack of containers, the sheet metal punctured with plastiglas windows. By now, we’re used to seeing these container estates, parked on the outskirts of villages and towns all over Germany. Outside, half a dozen men lean on plastic chairs, tapping around on their phones or talking quietly: all refugees. I approach them with a smile: &#39;Does anyone speak English?&#39; A young man looks up, furrows his brow at our over-stocked bikes and sweaty faces, then grins. &#39;Sure.&#39;

Back in England, we both volunteer for a charity called The Bike Project. Their mission is simple: take second hand bikes, fix them up and donate them to refugees in London. I love The Bike Project for three reasons. First up, I get to work on improving my abysmal bike mechanic skills. Secondly, I appreciate how much having a bike means in London – if I can’t afford public transport, then what hope is there for a refugee living on about thirty quid a week? Finally, I love The Bike Project because they offer refugees a taste of freedom: that feeling we all get when we’re on a bike, the road’s easy, the wind’s at our back and the world’s ours.

This summer I’m cycling 5,000km across Europe, from London to Gazientep in Turkey, following the routes of

The young man in the container park introduces himself as Salim, an Iraqi Kurd who fled fighting in his 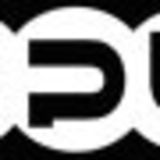