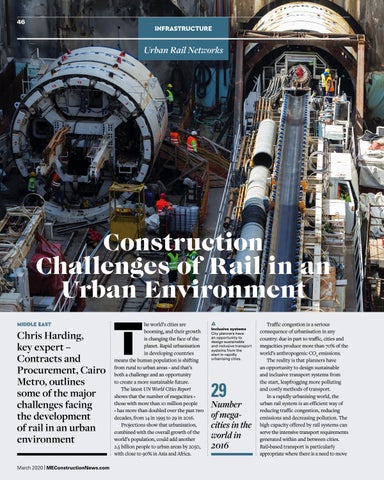 Construction Challenges of Rail in an Urban Environment MIDDLE EAST

Chris Harding, key expert – Contracts and Procurement, Cairo Metro, outlines some of the major challenges facing the development of rail in an urban environment March 2020 | MEConstructionNews.com

he world’s cities are booming, and their growth is changing the face of the planet. Rapid urbanisation in developing countries means the human population is shifting from rural to urban areas - and that’s both a challenge and an opportunity to create a more sustainable future. The latest UN World Cities Report shows that the number of megacities those with more than 10 million people - has more than doubled over the past two decades, from 14 in 1995 to 29 in 2016. Projections show that urbanisation, combined with the overall growth of the world’s population, could add another 2.5 billion people to urban areas by 2050, with close to 90% in Asia and Africa.

Inclusive systems City planners have an opportunity to design sustainable and inclusive transport systems from the start in rapidly urbanising cities.

Number of megacities in the world in 2016

Traffic congestion is a serious consequence of urbanisation in any country: due in part to traffic, cities and megacities produce more than 70% of the world’s anthropogenic CO2 emissions. The reality is that planners have an opportunity to design sustainable and inclusive transport systems from the start, leapfrogging more polluting and costly methods of transport. In a rapidly urbanising world, the urban rail system is an efficient way of reducing traffic congestion, reducing emissions and decreasing pollution. The high capacity offered by rail systems can serve the intensive transport requirements generated within and between cities. Rail-based transport is particularly appropriate where there is a need to move