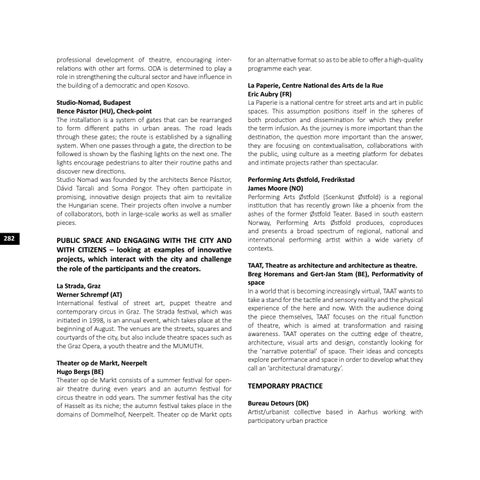 professional development of theatre, encouraging interrelations with other art forms. ODA is determined to play a role in strengthening the cultural sector and have influence in the building of a democratic and open Kosovo. Studio-Nomad, Budapest Bence Pásztor (HU), Check-point The installation is a system of gates that can be rearranged to form different paths in urban areas. The road leads through these gates; the route is established by a signalling system. When one passes through a gate, the direction to be followed is shown by the flashing lights on the next one. The lights encourage pedestrians to alter their routine paths and discover new directions. Studio Nomad was founded by the architects Bence Pásztor, Dávid Tarcali and Soma Pongor. They often participate in promising, innovative design projects that aim to revitalize the Hungarian scene. Their projects often involve a number of collaborators, both in large-scale works as well as smaller pieces. 282

PUBLIC SPACE AND ENGAGING WITH THE CITY AND WITH CITIZENS – looking at examples of innovative projects, which interact with the city and challenge the role of the participants and the creators. La Strada, Graz Werner Schrempf (AT) International festival of street art, puppet theatre and contemporary circus in Graz. The Strada festival, which was initiated in 1998, is an annual event, which takes place at the beginning of August. The venues are the streets, squares and courtyards of the city, but also include theatre spaces such as the Graz Opera, a youth theatre and the MUMUTH. Theater op de Markt, Neerpelt Hugo Bergs (BE) Theater op de Markt consists of a summer festival for openair theatre during even years and an autumn festival for circus theatre in odd years. The summer festival has the city of Hasselt as its niche; the autumn festival takes place in the domains of Dommelhof, Neerpelt. Theater op de Markt opts

for an alternative format so as to be able to offer a high-quality programme each year. La Paperie, Centre National des Arts de la Rue Eric Aubry (FR) La Paperie is a national centre for street arts and art in public spaces. This assumption positions itself in the spheres of both production and dissemination for which they prefer the term infusion. As the journey is more important than the destination, the question more important than the answer, they are focusing on contextualisation, collaborations with the public, using culture as a meeting platform for debates and intimate projects rather than spectacular. Performing Arts Østfold, Fredrikstad James Moore (NO) Performing Arts Østfold (Scenkunst Østfold) is a regional institution that has recently grown like a phoenix from the ashes of the former Østfold Teater. Based in south eastern Norway, Performing Arts Østfold produces, coproduces and presents a broad spectrum of regional, national and international performing artist within a wide variety of contexts. TAAT, Theatre as architecture and architecture as theatre. Breg Horemans and Gert-Jan Stam (BE), Performativity of space In a world that is becoming increasingly virtual, TAAT wants to take a stand for the tactile and sensory reality and the physical experience of the here and now. With the audience doing the piece themselves, TAAT focuses on the ritual function of theatre, which is aimed at transformation and raising awareness. TAAT operates on the cutting edge of theatre, architecture, visual arts and design, constantly looking for the ‘narrative potential’ of space. Their ideas and concepts explore performance and space in order to develop what they call an ‘architectural dramaturgy’.