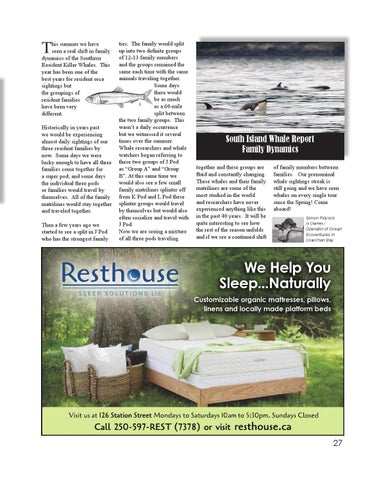 his summer we have seen a real shift in family dynamics of the Southern Resident Killer Whales. This year has been one of the best years for resident orca sightings but the groupings of resident families have been very different. Historically in years past we would be experiencing almost daily sightings of our three resident families by now. Some days we were lucky enough to have all three families come together for a super pod; and some days the individual three pods or families would travel by themselves. All of the family matrilines would stay together and traveled together. Then a few years ago we started to see a split in J Pod who has the strongest family

ties. The family would split up into two definite groups of 12-13 family members and the groups remained the same each time with the same animals traveling together. Some days there would be as much as a 60-mile split between the two family groups. This wasn’t a daily occurrence but we witnessed it several times over the summer. Whale researchers and whale watchers began referring to these two groups of J Pod as “Group A” and “Group B”. At this same time we would also see a few small family matrilines splinter off from K Pod and L Pod these splinter groups would travel by themselves but would also often socialize and travel with J Pod. Now we are seeing a mixture of all three pods traveling

South Island Whale Report Family Dynamics together and these groups are fluid and constantly changing. These whales and their family matrilines are some of the most studied in the world and researchers have never experienced anything like this in the past 40 years. It will be quite interesting to see how the rest of the season unfolds and if we see a continued shift

of family members between families. Our prenominal whale sightings streak is still going and we have seen whales on every single tour since the Spring! Come aboard! Simon Pidcock is Owner/ Operator of Ocean Ecoventures in Cowichan Bay 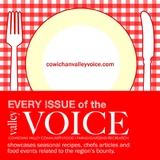 For those who love to eat, live, drink and shop in the Cowichan Valley.

For those who love to eat, live, drink and shop in the Cowichan Valley.