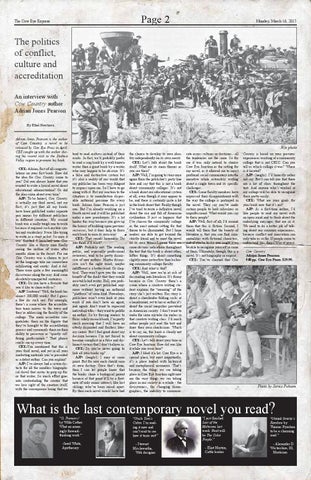 The politics of conflict, culture and accreditation An interview with Cow Country author Adrian Jones Pearson By Ethel Newtown

Adrian Jones Pearson is the author of Cow Country, a novel to be released by Cow Eye Press in April. CEX caught up with the author during his recent visit to the Diahwa Valley region to promote his book. CEX: Adrian, first of all congratulations on your first book. How did the idea for Cow Country come to you? Did you always know that you wanted to write a lyrical novel about educational administration? Or did the idea come about over time? AJP: To be honest, Cow Country is actually my third novel, not my first; it’s just that all my books have been published under separate pen names by different publishers in different countries. My second book was a really tough one to write because it required such austere syntax and vocabulary. It was like trying to write in a strait jacket. So once it was finished I launched into Cow Country like a thirsty man finally seeing the outline of water after months alone in the desert. For me Cow Country was a chance to just let the language take me somewhere exhilirating and exotic. And it did. There were quite a few meaningful discoveries along the way. And some absolutely unexpected sentences. CEX: Do you have a favorite that you’d like to share with us? AJP: Sentence? Well, the book has almost 200,000 words! But I guess a few do stick out. For example, there’s a scene where the accreditation team arrives to the town and they’re addressing the faculty of the college. The main accreditor congratulates them on the dignity that they’ve brought to the accreditation process and commends them on their ability to persevere as “quietly suffering professionals.” That phrase cracks me up every time. CEX:You mentioned that this is your third novel, and yet in all your marketing materials you’re presented as a debut author. Can you explain? AJP: I’ve always had a severe distaste for all the mindless biographical drivel that serves to prop up this or that writer. So much effort goes into credentialing the creator that we lose sight of the creation itself, with the consequence being that we

File photo tend to read authors instead of their works. In fact, we’d probably prefer to read a crap book by a well-known writer than a great book by a writer who may happen to be obscure. It’s a false and destructive system but it’s also a reality of our world that my publisher has been very diligent to impress upon me. So I have to go along with it. But my reaction to the situation is to manufacture disposable authorial personae for every book. Adrian Jones Pearson is just one. But I’m already working on a fourth novel and it will be published under a new pseudonym. It’s a lot harder this way because you give up the luxury of building upon previous successes, but it does help to force each book to earn its own way. CEX: That sounds honorable. Do you think it’ll work? AJP: Probably not. The reading public, and especially professional reviewers, tend to be pretty dismissive of new authors. Maybe dismissive isn’t the right word; maybe indifferent is a better word. Or skeptical. They won’t give you the same benefit of the doubt that they would an established writer. Hell, you probably can’t even get published anymore without having an authorial “platform” of some kind. Nowadays, publishers won’t even look at your work if you don’t have an agent, and agents don’t want to represent individual titles - they want to peddle an author. So by forcing readers to focus solely on each book, I’m pretty much ensuring that I will have an utterly disjointed and fruitless literary career. But I feel good about my decision because I’m not forced to become complicit in a false and dishonest system that I don’t believe in. CEX: So you’re never going to link all your books up? AJP: (laughs): I may at some point. But for now each should earn its own destiny. Once that’s done, then I can let people know that the books share a biological parent because at that point it’ll be a footnote of only minor interest, like lost siblings who’ve been raised apart. By then each novel would have had

the chance to develop its own identity independently on its own merits. CEX: Let’s talk about the book itself. What are its main themes as you see them? AJP: Well, I’m going to stray once again from the publisher’s party line here and say that this is not a book about community colleges. It’s not a book about our educational system at all, even though it may appear to be, and there is certainly quite a lot in the book about that. Really though I’ve tried to write a definitive novel about the rise and fall of American civilization. It just so happens that I’ve chosen the community college as the most natural setting for that theme to be illuminated. But I hope readers are able to get beyond the strictly literal and to meet the novel on its own terms. I mean there are some obvious indications throughout the text that this book is about other, loftier things. It’s about something slightly more instructive than bickering community college faculty. CEX: And what is that? AJP: Well, now we’re at risk of descending into literalism. It’s funny because in Cow Country there’s a scene where a creative writing student explains the “meaning” of the story she’s just written. Her story is about a cheerleader folding socks at a laundromat, yet to her as author it’s about the social inequities prevalent in American society. I don’t want to make the same mistake she makes in that creative writing class. I’d much rather people just read the text and draw their own conclusions. Which is to say, no, this book is clearly not about community colleges. CEX: Let’s talk about your time in Cow Eye Junction. How did you like it while you were here? AJP: I liked it a lot. Cow Eye is a special place, but most importantly, it’s a place loaded with historical and metaphorical resonance. That’s because the things we see taking place in Cow Eye Junction right now are the very things we see taking place in our society as a whole - the divisiveness, the changing demographics, the inability to communi-

cate across cultures or doctrines - all the tendencies are the same. So for me it was only natural to choose Cow Eye Junction as the setting for my novel, as it allowed me to inject profound social commentary into the narrative while ostensibly writing about a single town and its specific challenges. CEX: Some faculty members have expressed their disappointment with the way the college is portrayed in the novel. They say you’ve made certain people to look ridiculous or unprofessional. What would you say to these people? AJP: Well, first of all, I’d remind them that this is fiction. Second, I would tell them that the beauty of literature is that you can find commonalities with fictional characters, and if you’re lucky you might even be able to recognize yourself in some of them. Ultimately, though, this is a novel. It’s not biography or exposé. CEX: You’ve claimed that Cow

Country is based on your previous experiences working at a community college that is not CECC. Can you tell us which college it was? Where is it located? AJP: (laughs): I’d honestly rather not say. But I can tell you that there are a lot of clues throughout the text. And anyone who’s worked at my college will be able to recognize them pretty easily. CEX: What are your goals for your book now that it’s out? AJP: As a first-time author, I’d like people to read my novel with an open mind and to think about the underlying messages that are in it. We need to do a better job of talking about our common experiences, because conflict and innovation can only take us so far. If people come to understand this, then I’ll be at peace. Cow Country Adrian Jones Pearson 540 pp. Cow Eye Press. $19.95.

What is the last contemporary novel you read? “O, Pioneers! by Willa Cather. What an amazingly forwardthinking work.” -Jared White, Apothecary

“Uncle Tom’s Cabin. I’m reading it now and can’t wait to see how it turns out!” - Stewart Misslewaithe, Web designer

“I just finished Last of the Mohicans last week. Next will be The Color Purple.” 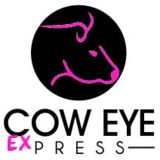