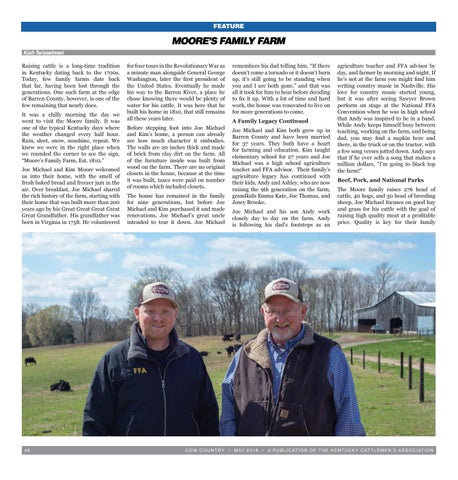 MOORE’S FAMILY FARM Kiah Twisselman Raising cattle is a long-time tradition in Kentucky dating back to the 1700s. Today, few family farms date back that far, having been lost through the generations. One such farm at the edge of Barren County, however, is one of the few remaining that nearly does. It was a chilly morning the day we went to visit the Moore family. It was one of the typical Kentucky days where the weather changed every half hour. Rain, sleet, snow, sunshine, repeat. We knew we were in the right place when we rounded the corner to see the sign, “Moore’s Family Farm, Est. 1810.” Joe Michael and Kim Moore welcomed us into their home, with the smell of fresh baked bread and freezer jam in the air. Over breakfast, Joe Michael shared the rich history of the farm, starting with their home that was built more than 200 years ago by his Great Great Great Great Great Grandfather. His grandfather was born in Virginia in 1758. He volunteered

for four tours in the Revolutionary War as a minute man alongside General George Washington, later the first president of the United States. Eventually he made his way to the Barren River, a place he chose knowing there would be plenty of water for his cattle. It was here that he built his home in 1810, that still remains all these years later.

remembers his dad telling him, “If there doesn’t come a tornado or it doesn’t burn up, it’s still going to be standing when you and I are both gone,” and that was all it took for him to hear before deciding to fix it up. With a lot of time and hard work, the house was renovated to live on for more generations to come.

Before stepping foot into Joe Michael and Kim’s home, a person can already see how much character it embodies. The walls are 20 inches thick and made of brick from clay dirt on the farm. All of the furniture inside was built from wood on the farm. There are no original closets in the house, because at the time it was built, taxes were paid on number of rooms which included closets.

Joe Michael and Kim both grew up in Barren County and have been married for 37 years. They both have a heart for farming and education. Kim taught elementary school for 27 years and Joe Michael was a high school agriculture teacher and FFA advisor. Their family’s agriculture legacy has continued with their kids, Andy and Ashley, who are now raising the 9th generation on the farm, grandkids Emma Kate, Joe Thomas, and Josey Brooke.

The house has remained in the family for nine generations, but before Joe Michael and Kim purchased it and made renovations, Joe Michael’s great uncle intended to tear it down. Joe Michael

Joe Michael and his son Andy work closely day to day on the farm. Andy is following his dad’s footsteps as an

agriculture teacher and FFA advisor by day, and farmer by morning and night. If he’s not at the farm you might find him writing country music in Nashville. His love for country music started young, but it was after seeing Sawyer Brown perform on stage at the National FFA Convention when he was in high school that Andy was inspired to be in a band. While Andy keeps himself busy between teaching, working on the farm, and being dad, you may find a napkin here and there, in the truck or on the tractor, with a few song verses jotted down. Andy says that if he ever sells a song that makes a million dollars, “I’m going to black top the farm!” Beef, Pork, and National Parks The Moore family raises 276 head of cattle, 40 hogs, and 50 head of breeding sheep. Joe Michael focuses on good hay and grass for his cattle with the goal of raising high quality meat at a profitable price. Quality is key for their family