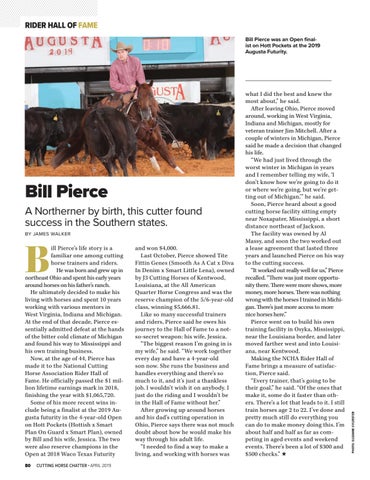 A Northerner by birth, this cutter found success in the Southern states. BY JAMES WALKER

ill Pierce’s life story is a familiar one among cutting horse trainers and riders. He was born and grew up in northeast Ohio and spent his early years around horses on his father’s ranch. He ultimately decided to make his living with horses and spent 10 years working with various mentors in West Virginia, Indiana and Michigan. At the end of that decade, Pierce essentially admitted defeat at the hands of the bitter cold climate of Michigan and found his way to Mississippi and his own training business. Now, at the age of 44, Pierce has made it to the National Cutting Horse Association Rider Hall of Fame. He officially passed the $1 million lifetime earnings mark in 2018, finishing the year with $1,065,720. Some of his more recent wins include being a finalist at the 2019 Augusta futurity in the 4-year-old Open on Hott Pockets (Hottish x Smart Plan On Guard x Smart Plan), owned by Bill and his wife, Jessica. The two were also reserve champions in the Open at 2018 Waco Texas Futurity 80

and won $4,000. Last October, Pierce showed Tite Fittin Genes (Smooth As A Cat x Diva In Denim x Smart Little Lena), owned by J3 Cutting Horses of Kentwood, Louisiana, at the All American Quarter Horse Congress and was the reserve champion of the 5/6-year-old class, winning $5,666.81. Like so many successful trainers and riders, Pierce said he owes his journey to the Hall of Fame to a notso-secret weapon: his wife, Jessica. “The biggest reason I’m going in is my wife,” he said. “We work together every day and have a 4-year-old son now. She runs the business and handles everything and there’s so much to it, and it’s just a thankless job. I wouldn’t wish it on anybody. I just do the riding and I wouldn’t be in the Hall of Fame without her.” After growing up around horses and his dad’s cutting operation in Ohio, Pierce says there was not much doubt about how he would make his way through his adult life. “I needed to find a way to make a living, and working with horses was

what I did the best and knew the most about,” he said. After leaving Ohio, Pierce moved around, working in West Virginia, Indiana and Michigan, mostly for veteran trainer Jim Mitchell. After a couple of winters in Michigan, Pierce said he made a decision that changed his life. “We had just lived through the worst winter in Michigan in years and I remember telling my wife, ‘I don’t know how we’re going to do it or where we’re going, but we’re getting out of Michigan,’” he said. Soon, Pierce heard about a good cutting horse facility sitting empty near Noxapater, Mississippi, a short distance northeast of Jackson. The facility was owned by Al Massy, and soon the two worked out a lease agreement that lasted three years and launched Pierce on his way to the cutting success. “It worked out really well for us,” Pierce recalled. “There was just more opportunity there. There were more shows, more money, more horses. There was nothing wrong with the horses I trained in Michigan. There’s just more access to more nice horses here.” Pierce went on to build his own training facility in Osyka, Mississippi, near the Louisiana border, and later moved farther west and into Louisiana, near Kentwood. Making the NCHA Rider Hall of Fame brings a measure of satisfaction, Pierce said. “Every trainer, that’s going to be their goal,” he said. “Of the ones that make it, some do it faster than others. There’s a lot that leads to it. I still train horses age 2 to 22. I’ve done and pretty much still do everything you can do to make money doing this. I’m about half and half as far as competing in aged events and weekend events. There’s been a lot of $300 and $500 checks.”

Bill Pierce was an Open finalist on Hott Pockets at the 2019 Augusta Futurity.