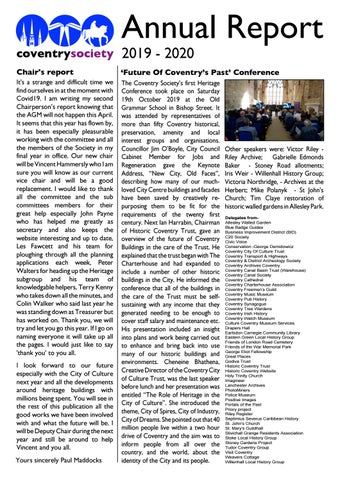 ‘Future Of Coventry’s Past’ Conference

It's a strange and difficult time we find ourselves in at the moment with Covid19. I am writing my second Chairperson’s report knowing that the AGM will not happen this April. It seems that this year has flown by, it has been especially pleasurable working with the committee and all the members of the Society in my final year in office. Our new chair will be Vincent Hammersly who I am sure you will know as our current vice chair and will be a good replacement. I would like to thank all the committee and the sub committees members for their great help especially John Payne who has helped me greatly as secretary and also keeps the website interesting and up to date, Les Fawcett and his team for ploughing through all the planning applications each week, Peter Walters for heading up the Heritage subgroup and his team of knowledgable helpers, Terry Kenny who takes down all the minutes, and Colin Walker who said last year he was standing down as Treasurer but has worked on. Thank you, we will try and let you go this year. If I go on naming everyone it will take up all the pages. I would just like to say 'thank you' to you all.

The Coventry Society’s first Heritage Conference took place on Saturday 19th October 2019 at the Old Grammar School in Bishop Street. It was attended by representatives of more than fifty Coventry historical, preservation, amenity and local interest groups and organisations. Councillor Jim O’Boyle, City Council Cabinet Member for Jobs and Regeneration gave the Keynote Address, “New City, Old Faces”, describing how many of our muchloved City Centre buildings and facades have been saved by creatively repurposing them to be fit for the requirements of the twenty first century. Next Ian Harrabin, Chairman of Historic Coventry Trust, gave an overview of the future of Coventry Buildings in the care of the Trust. He explained that the trust began with The Charterhouse and had expanded to include a number of other historic buildings in the City. He informed the conference that all of the buildings in the care of the Trust must be selfsustaining with any income that they generated needing to be enough to cover staff salary and maintenance etc. His presentation included an insight into plans and work being carried out to enhance and bring back into use many of our historic buildings and environments. Cheneine Bhathena, Creative Director of the Coventry City of Culture Trust, was the last speaker before lunch and her presentation was entitled “The Role of Heritage in the City of Culture”. She introduced the theme, City of Spires, City of Industry, City of Dreams. She pointed out that 40 million people live within a two hour drive of Coventry and the aim was to inform people from all over the country, and the world, about the identity of the City and its people.

I look forward to our future especially with the City of Culture next year and all the developments around heritage buildings with millions being spent. You will see in the rest of this publication all the good works we have been involved with and what the future will be. I will be Deputy Chair during the next year and still be around to help Vincent and you all. Yours sincerely Paul Maddocks

The Coventry Society has had many interesting talks and tours over the last year, here are some of them Talks Visits and Tours May - 'Phoenix Walking Tour' with Dr Eleanor Nesbit discovering part of the city centre

September - Ben Flippance Design Director of IDP Architects, challenged the Coventry Society to think about the impact of autonomous vehicles on the future environment. October - Brian Stote showed a series of images, mainly photographs, showing how Broadgate and the roads which have radiated from it have changed over time. November - George Demidowitz renowned archaeologist and historian 'What Lies Beneath' a talk on the discoveries about the development of the old cathedral as a result of the 2015 excavations. December - Peter James talked about Sydney Bunney famous Coventry artist and his watercolour drawing of old Coventry and Warwickshire veiws. January - Nigel Page talked about archaeological finds from Baginton, amazing Prehistoric, Roman and Anglo-Saxon cremation cemetery remains, before the new Jaguar Land Rover facility moves on the site.

June - Visit to Amazon Warehouse tour exploring this vast site on what used to be Jaguar Browns Lane, factory.

January - Roger Bailey - ‘Aten’ the Egyptian Sun God. Pharaoh Akhenatena built the ancient city of Amarna. Was this the inspiration for Donald Gibson’s design for Coventry Precinct? February - Aidan Ridyard Coventry’s postwar suburban Churches, focused our attention on St. Nicholas Church in Radford. Plus other example of post-war Church building in the city.

August - Visit to Tamworth hosted by the Tamworth Society

September Heritage Open Days - plans for the area of Burges and a tour by Paul Maddocks March - Lesley Durbin talked on the subject of restoration of the Cullen Tile Mural, plus architectural tiles their conservation and restoration.

The Coventry Society has been involved with many other interesting projects Coventry’s Heritage Action Zone Peter Walters and Paul Maddocks Much Park St. Gate, Cook St. St. Mary’s Guildhall. represent the Coventry Society and Gate and Swanswell Gate are The committee was able to see the attend the HAZ meetings. The the three remaining gatehouses of progress of the major plans to make initiative is to unleash the power in Coventry’s medieval times. They St. Mary’s Guildhall fit for the 21st Coventry’s historic buildings to will provide studio units, including Century. A total of £5.5 million is to breathe new life into old places kitchen, bedroom and bathroom be spent on the building. restoration that are rich in heritage, working facilities accessed by new stairs etc. of the medieval kitchen (see photo) with Historic Coventry and the City plus conservation and showcasing Council. Historic England through, of the tapestry, a City Council lead the Heritage Lottery Fund, is project. helping to making them attractive to residents, businesses, tourists and investors. They are doing this through joint-working, grant funding and sharing their skills. The Burges - One of the most building and places that are involved prominent routes into the City are centre which is now sadly neglected Charterhouse Priory and the but still has a large number of grounds, Historic Coventry Trust historical buildings mainly used as has been awarded a National shops. The River Sherborne, that Lottery Heritage Fund grant of £4.3 flows behind the shops in the Lychgate Cottages. 3-5 Priory million to restore Charterhouse Burges, has been covered over and Row are three remarkable closePriory and the adjoining land. unseen by the public for many years. studded timber frame properties Restoration work has started on the The Historic Coventry Trust is dating from around 1415 and the main building and wall murals. bring back the charm of the area and only upstanding buildings surviving upgrading the shopping experience. from the 12th century St Mary’s There are plans to re-open the Priory complex. Historic Coventry River as much as possible and bring Trust will revive and provide much in new buildings in line with those needed visitor accommodation in the lead up to City of Culture 2021. already present.

London Road Cemetery The restoration of the Grade II* listed cemetery, its Anglican chapel and the Non-conformist chapel that the Historic Coventry Trust will be restoring. The cemetery is run by the Council's Bereavement Services. The cemetery has many interesting buildings including the Entrance Lodge, Prospect Tower and the memorial for Sir Joseph Paxton.

Drapers' Hall Historic Coventry Trust is working in partnership with The Princes Foundation and Coventry Music Service to restore this beautiful building which will be open in time for UK City of Culture 2021. Prince Charles visited the building before work started.

The concept for reusing and saving old building was a Coventry Society idea many years ago when Keith Draper and David Tittle from the Society organised a conference in the Coventry University Architect's Department. Many different people from the City Council and other organisations attended to discuss the five major empty building at the time - Old Grammar School, County Court, Drapers' Hall, Charterhouse and Whitefriers Monastery. From this the Coventry Society launched a 'Save the Big Five' Campaign.

The Coventry Society is always interested in plans and projects for the future Abbotts Lane. The Coventry Society committee were consulted on the plans and walked the site. We welcome the proposed provision of high quality residential flats and welcome the return of a residential population into the city centre rather than just more student accommodation. There will be new access from Naul's Mill Park into Belgrade Square with a park area under the ring road, plus the opening up the Radford Brook.

The Telegraph Hotel. The old Coventry Telegraph building is being converted to become a new boutique hotel. The Coventry Society was consulted on the plans and welcomes the proposed new hotel and attached Digital Art Gallery.

Cov. & Warwick Hospital old site development. Again the Coventry Society was consulted on the plans and pleased with the reuse of the old Nurses Home and the hexagonal out patients building, the committee had a visit there.

Old Civic Centre Two site. The Coventry Society was consulted on the Coventry University proposals and felt too much of the original old Architects and Planning Offices would be lost. We put our objection to the loss of the listed building. The city Council will make the decision based on the advice of Historic England. We now await the decision on this.

Coventry Society publication of brochures 'Postwar Architecture', 'Public Art', and 'Heritage' tours are the first of many new publications for the Coventry Society which should be helpful for people who are visiting the city in 2021 UK City of Culture.

The Coventry Society is very interested to know what is going to happen to the now closed Sports Centre, Swimming Baths, Priory Visitor Centre and the Whitefriars' Monastry. We would also like to know what is happening to the old Paris Cinema (now the Empire) which is moving to Hertford Street. Also what is happening to the Coventry Canal Basin & Spon St. (which seems to be failing)? Where will the Police Museum be located and where will the Naiad be placed? What will happen to the City Centre South Scheme re development? Where and when is the Coventry Cross to be reerected? The Society will be following all these issues keenly and scrutinising any developments. The committee of the Coventry Society has had various one to one meetings with different people including Cllr. McNicholas, Cllr. Jim Oâ&#x20AC;&#x2122;Boyle, Cllr. Ed Ruane. Colin Knight, Director of Transportation & Highways, plus Carol Pyrah, Executive Director and Ian Harrabin Chair of Historic Coventry Trust and discussing many different topics which all help to keep in touch with what the future of the city could be. We also hope to have talks with people from UK City of Culture 2021 soon. This year is the Coventry Society's 50th anniversary 1970 - 2020. Because of the developing Covid-19 crisis, we will have some difficult decisions to make on our future programme of meetings and activities, so please look on our website for ongoing details.

Campaigning for a quality Coventry 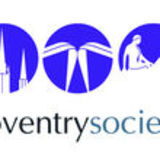 The annual report of the Coventry Society, the Civic Amenity Society for the city of Coventry, UK

The annual report of the Coventry Society, the Civic Amenity Society for the city of Coventry, UK