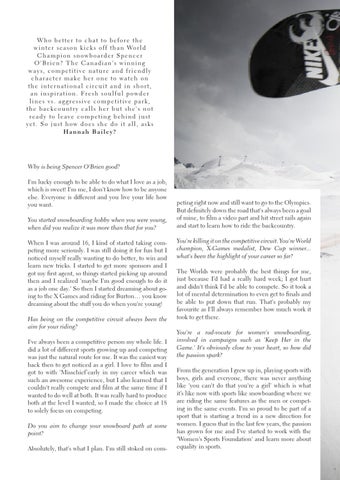 Why is being Spencer O&#39;Brien good? I&#39;m lucky enough to be able to do what I love as a job, which is sweet! I&#39;m me, I don&#39;t know how to be anyone else. Everyone is different and you live your life how you want. You started snowboarding hobby when you were young, when did you realize it was more than that for you? When I was around 16, I kind of started taking competing more seriously. I was still doing it for fun but I noticed myself really wanting to do better, to win and learn new tricks. I started to get more sponsors and I got my first agent, so things started picking up around then and I realized &#39;maybe I&#39;m good enough to do it as a job one day.&#39; So then I started dreaming about going to the X Games and riding for Burton… you know dreaming about the stuff you do when you&#39;re young! Has being on the competitive circuit always been the aim for your riding? I&#39;ve always been a competitive person my whole life. I did a lot of different sports growing up and competing was just the natural route for me. It was the easiest way back then to get noticed as a girl. I love to film and I got to with &#39;Misschief’early in my career which was such an awesome experience, but I also learned that I couldn&#39;t really compete and film at the same time if I wanted to do well at both. It was really hard to produce both at the level I wanted, so I made the choice at 18 to solely focus on competing. Do you aim to change your snowboard path at some point? Absolutely, that&#39;s what I plan. I&#39;m still stoked on com-

peting right now and still want to go to the Olympics. But definitely down the road that&#39;s always been a goal of mine, to film a video part and hit street rails again and start to learn how to ride the backcountry. You&#39;re killing it on the competitive circuit. You&#39;re World champion, X-Games medalist, Dew Cup winner... what&#39;s been the highlight of your career so far? The Worlds were probably the best things for me, just because I’d had a really hard week; I got hurt and didn&#39;t think I&#39;d be able to compete. So it took a lot of mental determination to even get to finals and be able to put down that run. That&#39;s probably my favourite as I&#39;ll always remember how much work it took to get there. You&#39;re a rad-vocate for women&#39;s snowboarding, involved in campaigns such as &#39;Keep Her in the Game.&#39; It&#39;s obviously close to your heart, so how did the passion spark? From the generation I grew up in, playing sports with boys, girls and everyone, there was never anything like &#39;you can&#39;t do that you&#39;re a girl’ which is what it’s like now with sports like snowboarding where we are riding the same features as the men or competing in the same events. I&#39;m so proud to be part of a sport that is starting a trend in a new direction for women. I guess that in the last few years, the passion has grown for me and I&#39;ve started to work with the &#39;Women&#39;s Sports Foundation&#39; and learn more about equality in sports. 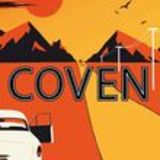