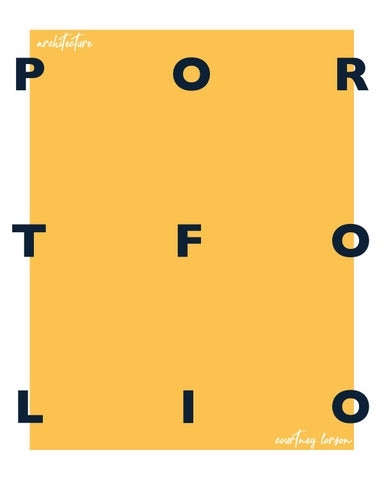 biography Welcome to the past five years of my life! I started off my collegiate career at Northern Arizona University, and as much as I loved living in Flagstaff, it was clear I belonged somewhere else. I had been drawing house plans ever since I was seven years old, visiting model homes every weekend. I came home one weekend from college with a floor plan of a house and my mom told me I needed to pursue architecture. I had wanted to be an architect from the time I started drawing plans, but somewhere in high school, I got scared off because I couldnâ&#x20AC;&#x2122;t draw a straight line (good news; architects donâ&#x20AC;&#x2122;t draw straight lines). I did a bunch of research and landed at Oklahoma State University the next fall.

Architecture school was exactly what I had hoped for, meeting people like myself for the first time, being around a creative, analytical group of people really sparked the passion for architecture I had when I was little. I developed a passion for sustainable design with materials that can not only be thought of in my head but actually created! I cannot wait to pursue my post-grad life at an architecture firm that makes me a part of their creative process. In the next five years, I am enthusiastic to move into the next phase of my life with intentions of architectural licensure, research in sustainability, and development in creative expression.

For our comprehensive studio, our client was the Museum of the Bible. We toured their current offices and storage solutions, both of which exist in a warehouse in Oklahoma City. We moved their offices and storage to downtown OKC. This combination of preserving and storing historical artifacts and creating a communicative workspace drove the contrast of transparent and opaque materials. The design of the building was done by three architecture students and one architectural engineering student. We felt that the employees of the museum needed more light in their offices, with a lounge and a terrace above the offices to take in views of downtown. The solid lower tower is made of limestone and conceals these ancient artifacts with a mezzanine style system, keeping everything reachable for the workers. It is modeled after the library of antiquity with the â&#x20AC;&#x153;endlessâ&#x20AC;? shelves of information. We also created spaces for public users to interact with these artifacts including glazing on the studios that work on the artifacts to preserve them, a gallery space for exhibits of the museum, and a local double height cafe that is open to the public. Sustainability was a driving factor in the design. There is a rooftop terrace on the third floor for seating and looking at the views after going through the gallery space. On the sixth floor, there is a green roof with trees and heavier loads to insulate the storage rooms even more. It keeps the rooms at a lower temperature than the rest of the building. The top floor is a hospitality space with a rooftop balcony, made for parties, events, or wedding venues. The sloping roof hosts a variety of small grasses to keep the rooftop from any potential uplift. Overall, the materials played a role in how the public interpreted the space, a white, inviting limestone with highly reflective glazing and a cool wood bring together a naturalistic timeless building.

Stadio della Roma has a facade meant to both represent and invite loacal and international guests to come to the game. The textured glass panels divide up such a massive facade to appear smaller and draw people in.

The interior has luxurious finshes to accomodate the wealthy guests with advanc security entrances and priv circulation for the protectio of the guests in the area. H ever, when the guests wan show off, they are visible.

e ced vate on Hownt to

ROMA This stadium will revolutionize the use of stadiums succeeding it. The interior can be transformed into sport events, concerts, or parties. The perimeter hosts a mega retail mall. The retail mall is a place to occupy regularly bringing more traffic than a traditional stadium site. Integration of new restaurants along the riverside catalyzes urbanization to Europe along the Tiber River. The river walk will lead to the components of the development.

SITE & Stadio Della Roma is being proposed on the site that the Stadio is currently under construction. We are going to redevelop the site with a new skin system, structure to accommodate the stadium, and new topography. I have comprised a seating layout similar to the traditional football layout seen across Europe. The structural system is primarily out of steel to express a monumental feel throughout the space. The preliminary section, top right, provides the initial concept and the development of the project from the original design.

URBAN DE At my summer internship, I was asked to complete studies of the exterior balconies. The project is an urban workplace with the option for social, business, or individual spaces for the employees to be outside. The first design, right, is the study of how spaces correlate with the buildingâ&#x20AC;&#x2122;s interior.

The second iteration, right, goes more into depth of creating seating arrangements to benefit the employees production outside. The three sections are more integrated throughout the space. This design allows for pockets of individual areas instead of entire sections.

The final study for the terraces brought a variety of seating options, some more interactive and some more traditional. The sketches, above, show the variety of seating and what areas they would be implemented. The landscaping is also an opportunity to incorperate multiple textures and colors into the design.

The hotel and elementary school located on Northern Arizona Universityâ&#x20AC;&#x2122;s south campus presents a blend between uses. The entries to the hotel consist of a skybridge to blend the design of fluidity and movement of the school to the rigid hotel.This sky-bridge is surrounded by a great deal of foliage that can be used as a teaching lesson for the school and a very nice setting for a glass walled connection. The main hotel approach is at the bottom of the sloped site with a drive through entry connecting to the lobby and a central lounge area inside the hotel. The two locations connect to each other by a grand staircase again taking the views into account to give the best atmosphere. The seven peaks that make up the San Fransisco Peaks in Flagstaff, AZ were the initial inspiration for the hotel design. These seven peaks are part of the horseshoe shape that make up the mountain. The points are a result of the volcano that erupted millions of years ago that sits 14,000 feet above sea level. These mountains are the most iconic part of Flagstaff as the city follows along the base of the mountain. Each point was flattened to create a line with variegating depths that created the design of the facade for the hotel. When flattened the lines create an angled outline which was modified to a rectilinear shape that creates the hotel building footprint. With every movement of the peaks the building imitates that movement.

The goal of the transit hub in Tulsa is to create a self sustaining environment that encourages local shopping and living based on the practices in Europe when daily food is purchased and taken to the office and dinner can be picked up where the bus stops. The second phase plans to add micro apartments across from the hub. Tulsa needs more individual apartments in the area and this solution would keep it local and low cost.

ADAPTIVE The first project of the final studio in my undergraduate degree was the adaptive reuse of an office building in Koreatown, Los Angeles. Our studio sponsor, an urban developer, had purchased the office building with plans to turn it into a co-living / co-housing environment. In small groups we developed a proposal, using the existing concrete structure, at minimum, to create a building that could provide the developer with the largest profit margin possible.

Our project proposes an additional exterior skin system of movable panels, inspired by traditional Korean architecture combined with modern design in California. We have created balconies behind the operable panels for each apartment. Each balcony is at an angle neither parallel or perpendicular to existing parts of the building. The layered materialities of 425 Shatto Place creates a depth that was originally missing in the initial design. With an east / west exposure the building requires a solution to minimize the solar heat gain. An efficient shading system in a climate with harsh direct sunlight will create lower electricity costs, in combination with solar panels on the roof. There are apartments ranging from studios to two beds and den in the building. On the ground floor we have designed a prototype mixed use space for a market space, similar to that of DTLAâ&#x20AC;&#x2122;s Grand Central Market.

The arrangement of the apartment units within the existing building aims to include a variety of different textures, sizes, and amenities. The second floor(top left) is the typical floor plan that is repeated on the fifth floor(not pictured). The typical floor has 14 one bedroom plans and four one bedroom + den. The third and fourth floors consist of work/live two-story apartments for the modern day employee who works from home. There are additional doors on the fourth floor for the residents to have a separate business entry.

These multi-level units would also be suited for someone searching for more space or a young family. The plans are modular to be constructed with ease and the regularity allows the maximum unit number.

The sixth floor(bottom left) is where the artrium divides the left side of the building from the right on the existing structural grid. On the right there will be a rooftop garden space to accomodate community events, house a garden green roof, amenities such as cooking spaces, a bar, and a lounge.

The Shatto Place site is eligible to take advantage of Los Angelesâ&#x20AC;&#x2122; Adaptive Reuse program. This program incentivizes the conversion of aging commercial buildings into livable residential space. According to the cities guidelines substantial, physical modification is required. Aside from that, the only requirement is that apartments be no smaller than 450 sq. ft, and the average unit size must be above 750 sq. ft. Meeting these two requirements will allow us take advantage of several of the incentives offered by the city. The density restrictions are waived. Meaning we will be able to get the absolute maximum amount of units into the building. Along with the density, all setback and height restrictions will be waived. Also, no new parking spaces shall be required. So long as the site has the same amount of parking before and after construction, no parking requirements will be enforced.