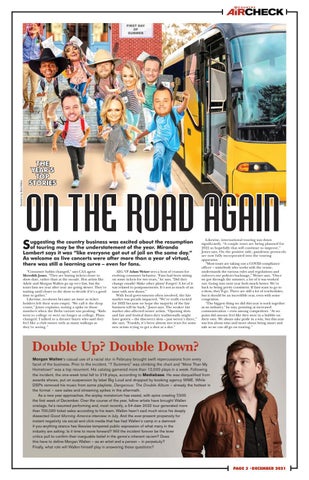 ON THE ROAD AGAIN

uggesting the country business was excited about the resumption of touring may be the understatement of the year. Miranda Lambert says it was “like everyone got out of jail on the same day.” As welcome as live concerts were after more than a year of virtual, there was still a learning curve – even for fans.

“Consumer habits changed,” says CAA agent Meredith Jones. “They are buying tickets closer to show date, rather than at the on-sale. Hot artists like Adele and Morgan Wallen go up very fast, but the tours fans see year after year are going slower. They’re waiting until closer to the show to decide if it’s a good time to gather.” Likewise, no-shows became an issue as ticket holders left their seats empty. “We call it the drop count,” Jones explains, noting a spike in those numbers when the Delta variant was peaking. “Kids went to college or were no longer at college. Plans changed. I talked to a theater buyer who said they feel like a club owner with as many walkups as they’re seeing.”

AEG VP Adam Weiser sees a host of reasons for evolving consumer behavior. “Fans had been sitting on some tickets for two years,” he says. “Did they change emails? Make other plans? Forget? A lot of it was related to postponements. It’s not as much of an issue with new shows.” With local governments often involved, the fair market was greatly impacted. “We’re really excited for 2022 because we hope the majority of the fair business will be back,” Jones says. The weaker fair market also affected newer artists. “Opening slots and fair and festival dates they traditionally might have gotten – the discovery slots – just weren’t there,” she says. “Frankly, it’s been almost two years for some new artists trying to get a shot at a slot.”

Likewise, international touring was down significantly. “A couple tours are being planned for 2022 so hopefully that will continue to improve,” Jones says. On the positive side, pandemic protocols are now fully incorporated into the touring apparatus. “Most tours are taking out a COVID compliance officer – somebody who works with the venue, understands the various rules and regulations and enforces our policies backstage,” Weiser says. “Once we got through the summer, a lot of it was worked out. Going into next year feels much better. We’re back to being pretty consistent. If fans want to go to a show, they’ll go. There are still a lot of reschedules, but it should be an incredible year, even with some congestion. “The biggest thing we did this year is work together as an industry,” he says, pointing at increased communication – even among competitors. “At no point did anyone feel like they were in a bubble on their own. We always take pride in a win, but this year was less about wins and more about being smart and safe so we can all go on touring.”

Double Up? Double Down? Morgan Wallen’s casual use of a racial slur in February brought swift repercussions from every facet of the business. Prior to the incident, “7 Summers” was climbing the chart and “More Than My Hometown” was a top recurrent. His catalog garnered more than 12,000 plays in a week. Following the incident, the one-week total fell to 218 plays, according to Mediabase. He was disqualified from awards shows, put on suspension by label Big Loud and dropped by booking agency WME. While DSPs removed his music from some playlists, Dangerous: The Double Album – already the hottest in the format – saw sales and streaming spikes in the aftermath. As a new year approaches, the airplay moratorium has eased, with spins cresting 7,500 the first week of December. Over the course of the year, fellow artists have brought Wallen onstage, he’s resumed performing and, most recently, a 54-date 2022 tour generated more than 700,000 ticket sales according to his team. Wallen hasn’t said much since his deeply dissected Good Morning America interview in July. And the ever-present propensity for instant negativity via social and click media that has had Wallen’s camp in a damnedif-you-anything stance has likewise tempered public expression of what many in the industry are asking: Is it time to move forward? Will the incident forever be the lever critics pull to confirm their inarguable belief in the genre’s inherent racism? Does this have to define Morgan Wallen – as an artist and a person – in perpetuity? Finally, what role will Wallen himself play in answering these questions?