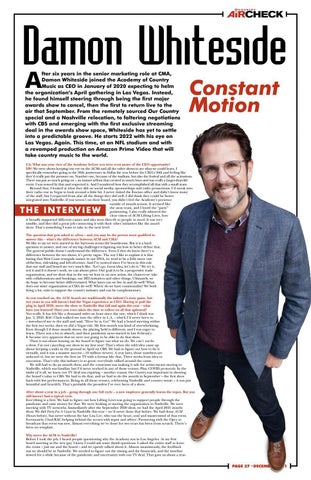 Damon Whiteside A fter six years in the senior marketing role at CMA, Damon Whiteside joined the Academy of Country Music as CEO in January of 2020 expecting to helm the organization’s April gathering in Las Vegas. Instead, he found himself steering through being the first major awards show to cancel, then the first to return live to the air that September. From the remotely sourced Our Country special and a Nashville relocation, to faltering negotiations with CBS and emerging with the first exclusive streaming deal in the awards show space, Whiteside has yet to settle into a predictable groove. He starts 2022 with his eye on Las Vegas. Again. This time, at an NFL stadium and with a revamped production on Amazon Prime Video that will take country music to the world.

CA: What was your view of the Academy before you were even aware of the CEO opportunity? DW: We were always keeping our eye on the ACMs and all the other shows to see what we could learn. I specifically remember going to the 50th anniversary in Dallas the year before the CMA’s 50th and feeling like they’d really put the pressure on. Number one, because of the stadium, but also the festival and all the activations. There was just so much going on – an instant sellout that created so much buzz and was really a larger-than-life event. I was wowed by that and respected it. And I wondered how they accomplished all that with a small team. Beyond that, I looked at what they did on social media, sponsorships and radio promotions. I’d sneak into their radio row in Vegas to look around a little bit. I never visited the Encino office and didn’t know many of the staff, but I respected from afar all the things they did well. I did think they could be better integrated into Nashville; if you weren’t on their board, you didn’t feel the Academy’s presence outside of awards season. It seemed like the away team, and I loved the “party” positioning. I also really admired the clear vision of ACM Lifting Lives, how it broadly supported different causes and also went directly to people in need. It was very nimble, and they did a great job connecting it with their other initiatives like the award show. That’s something I want to take to the next level.

The question that gets asked so often – and you may be the person most qualified to answer this – what’s the difference between ACM and CMA? We like to say we were started in the barroom versus the boardroom. But it is a hard question to answer, and one of my big challenges is figuring out how to better define that. The general public doesn’t understand the difference. Even if they do know there’s a difference between the two shows, it’s pretty vague. The way I like to explain it is that having that West Coast renegade nature in our DNA, we tend to be a little more outof-the-box, risk-taking and left-of-center. And I’ve noticed since I’ve been in this role that our staff and board are very much like, “Let’s go. Great idea, let’s do it.” We try it, test it and if it doesn’t work, we can always pivot. Our goal is to be a progressive trade organization, and we show that in the way we lean in on new artists, the chances we take with collaborations and bookings, our DEI initiatives and other things. Ultimately, we do hope to become better differentiated. What lanes can we live in and do well? What does our sister organization at CMA do well? Where do we have commonality? We both bring a lot, exist to support the country industry and can be complementary. As you touched on, the ACM Awards are traditionally the industry’s away game, but two years in you still haven’t had the Vegas experience as CEO. Having to pull the plug in April 2020, move the show to Nashville that fall and again this year – what have you learned? Have you even taken the time to reflect on all that upheaval? Not really. It has felt like a thousand miles an hour since day one, which I think was Jan. 2, 2020. RAC Clark walked me into the office in L.A. – which I’d never been to – introduced me to the staff and said, “Here he is. Go!” We had a board meeting within the first two weeks, then we did a Vegas visit. My first month was kind of overwhelming. Even though I’d done awards shows, the playing field is different, and I was eager to learn. There was a lot to absorb, and then pandemic news started in late February. It became very apparent that we were not going to be able to do that show. Then it was about leaning on the board to figure out what we do. We can’t not do a show. I’m not canceling our show in my first year! That’s when the wild idea came up about keeping a stake in the ground in April on CBS. We had to figure out how to do it virtually, and it was a massive success – 10 million viewers. A year later, those numbers are unheard of, but we were the first on TV with a format like that. Three weeks from idea to execution. That’s why this industry is so great; everybody rallied around the cause. We still had to do an awards show, and the consensus was making it safe for artists meant moving to Nashville, which was familiar, but I’d never worked in any of those venues. Plus, COVID protocols. In the midst of it all, we knew our TV deal was expiring – another reason Our Country was important in showing the brand’s value to CBS. We had to do that, and we had to do the awards in September – the first show back with live performances. Being in all those venues, celebrating Nashville and country music – it was just beautiful and heartfelt. That’s probably the proudest I’ve ever been of a show. After about a year in a job – going through one full cycle – a new employee generally learns the ropes. But you still haven’t had a typical cycle. Everything is a first. We had to figure out how Lifting Lives was going to support people through the pandemic and raise money for that. We were looking at moving the organization to Nashville. We were meeting with TV networks. Immediately after the September 2020 show, we had the April 2021 awards show. We did Party For A Cause in Nashville this year – we’d never done that before. We had done ACM Honors before, but never without the late Lisa Lee, who was the heart, soul and mastermind of that event. Fortunately, I had RAC helping behind the scenes with input and advice. Partnering with the Opry to broadcast that event was new. Almost everything we’ve done for two years has been from scratch. There’s been no template. Why move the ACM to Nashville? Before I took the job, I heard people questioning why the Academy was in Los Angeles. At my first board meeting as the new guy, I knew I could ask some dumb questions. I asked the entire staff to leave the room – just me and the board – and we openly talked about it. Almost unanimously, the feedback was we should be in Nashville. We needed to figure out the timing and the financials, and the timeline slowed for a while because of the pandemic and uncertainty with our TV deal. That gave us about a year-