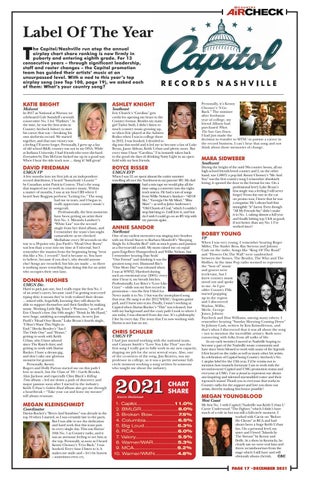 Label Of The Year

he Capitol/Nashville run atop the annual airplay chart share ranking is now firmly in puberty and entering eighth grade. For 13 consecutive years – through significant leadership, staff and roster changes – the Capitol promotion team has guided their artists’ music at an unsurpassed level. With a nod to this year ’s top airplay song (see Top 100, page 19), we asked each of them: What’s your country song?

In 2017 as National at Warner, we celebrated Cole Swindell’s seventh consecutive No. 1 for “Flatliner.” At the time, he was the first artist in Country Aircheck history to start his career that way – breaking his own six-for-six record. We started together, and that rare victory was a feeling I’ll never forget. Personally, I grew up a fan of old school R&amp;B; country was not in my DNA. While at Indiana University, I had friends who were die-hard. Everywhere by Tim McGraw fucked me up in a good way. When I hear the title track now ... dang it! Still great!

Eric Church’s “Carolina” gets credit for opening my heart to the Country format. Besides my main girl Taylor Swift, I didn’t listen to much country music growing up, so when Eric played at the Auburn Rodeo when I was in college there in 2012, I was hooked. I decided to dig into this world and it led me to become a fan of Luke Bryan, Jason Aldean, Keith Urban and plenty more. But every time I hear “Carolina,” I’m instantly taken back to the good ole days of drinking Natty Light in an open field with my best friends.

A few months into my first job at an independent record distributor, I heard “Somebody’s Leavin’” by Canadian artist Patricia Conroy. That’s the song that inspired me to work in country music. Within a matter of months, I was at my first CRS where I heard Suzy Bogguss perform “Letting Go.” The song had me in tears, and I began to really appreciate country music’s songcraft. Professionally, the best moments have been getting an artist their first No. 1. Miranda Lambert’s “White Liar” was the second single from her third album, and I remember the team’s late-night camaraderie as we checked Mediabase every 30 seconds on the way to a 38-point win. Jon Pardi’s “Head Over Boots” was less than a year into my time at Universal, but I remember the mantra from the beginning being “treat this like a No. 1 record!” And it became so. You have to believe, because if you don’t, why should anyone else? Songs are recorded, but hits are made ... so there is nothing more rewarding than doing this for an artist who occupies their own lane.

When I was 12, we spent almost the entire summer travelling all over the Northwest in my parents’ RV. My dad had a mix tape we would play all the time using a converter into the eighttrack system. He had a ton of songs from Willie Nelson’s Stardust – “All Of Me,” “Georgia On My Mind,” “Blue Skies” – as well as John Anderson’s “Old Chunk of Coal,” which I couldn’t stop listening to. I still love it, and boy do I wish I could go on an RV trip with my parents again.

Hard to pick just one, but I really enjoy the first No. 1 of an artist’s career, because (and I’m getting teary-eyed typing this) it means they’ve truly realized their dream ... mixed with, hopefully, knowing they will always be able to support themselves and their families by making music. Working Little Big Town’s “Pontoon,” as well as Eric Church’s first (his 10th single) “Drink In My Hand,” were huge, satisfying accomplishments. As were Jon Pardi’s “Head Over Boots;” Luke Bryan’s fourth single, “I Don’t Want This Night to End;” Dierks Bentley’s “Am I The Only One” and “Home;” getting to work with Keith Urban, who I have adored since The Ranch days; and getting to work with Darius Rucker. I have a dream gig, and don’t take one glorious moment for granted. Personally, Kenny Rogers and Dolly Parton started me on this path I love so much, but the Class of ’89 – Garth Brooks, Alan Jackson and especially Clint Black’s Killing Time album – led me down a path of discovery and major passion soon after I started in the industry. Keith Urban’s Golden Road album also got me through a heartbreak – “Take your cat and leave my sweater” will always resonate.

Darius Rucker’s “Beers And Sunshine” was already in the top 10 when I started, so I was certainly late to the party. But I was able to see the dedication and hard work that this team puts in every single day. This was Darius’ 10th No. 1 at Country radio, and it was an awesome feeling to see him at the top. Personally, as soon as I heard Kenny Chesney’s “I Go Back,” I was hooked. Every time I listen to it, it makes me smile and – let’s be honest – sometimes even cry.

One of my earliest memories was singing into brushes with my friend Stacey to Barbara Mandrell’s “Sleeping Single In A Double Bed” with as much gusto and passion as a five-year-old could. My mom raised me on equal parts Engelbert Humperdinck and Willie Nelson, but I remember hearing Dan Seals’ “One Friend” and thinking it was the greatest song ever. Diamond Rio’s “One More Day” was released when I was at WWYZ/Hartford during such an emotional year (2001); every time I hear it, my breath hitches. Professionally, Lee Brice’s “Love Like Crazy” – while not my first record in promotion – was the first I bled for. Never made it to No. 1 but was the most-played song that year. He sang it at the 2012 WKXC/Augusta guitar pull, and I burst into tears. Finally, I wasn’t working at Capitol when Darius Rucker’s “This” was released, but with my background and the crazy path I took to where I am today, I was obsessed from day one. It’s a philosophy I live by every day. The irony that I’m now working with Darius is not lost on me.

I had just started working with the national team, and Canaan Smith’s “Love You Like That” was the first song I really got to fully work in my new capacity, shaping my job for the next several years. Also, one of the co-writers of the song, Jim Beavers, was my professor in college, so it was a pretty awesome fullcircle moment working a song written by someone who taught me about the industry.

Personally, it’s Kenny Chesney’s “I Go Back.” The summer after freshman year of college, my friend Allison had purchased When The Sun Goes Down. I had just made the decision to transfer to MTSU to pursue a career in the record business. I can’t hear that song and not think about those memories of change.

During the height of the mid-’90s country boom, all my high school friends loved country and I, on the other hand, was 1,000% a pop kid. Kenny Chesney’s “Me And You” was the first country song I remember absolutely loving; it opened the door to the format for me. On a professional level, Luke Bryan’s first single was a feeling I will never forget! From day one in the car on promo tour, I knew that he was a megastar. He’s always had that intangible “it” factor. Even though “All My Friends Say” didn’t make it to No. 1, taking almost a full year and finally hitting top 5 felt as good, if not better, than any No. 1 I’ve worked since!

When I was very young, I remember hearing Roger Miller, The Statler Bros, Ray Stevens and Johnny Cash on the radio. Songs like “King Of The Road” and “Flowers On The Wall” were sandwiched between the Stones, The Beatles, The Who and The Hollies. At the time Pop radio seemed to represent the “best of” music and genres were irrelevant, but I knew country music stood out and spoke to me. As I got older Country FMs started popping up in the region and I discovered Waylon, Willie, Merle, George Jones, Johnny Paycheck and Don Williams, among many others. I remember hearing “Sunday Morning Coming Down” by Johnny Cash, written by Kris Kristofferson, and that’s when I discovered that it was all about the song – not to mention the incredible artistry. Both were connecting with folks from all walks of life. In my early twenties I moved to Nashville hoping to become a part of the Nashville music community and have since been blessed to work with many of the legends I first heard on the radio as well as many other hit artists. In celebration of Capitol being Country Aircheck’s No. 1 airplay label for the 13th year, I’d be remiss not to mention how insanely fortunate I am to work with the second-to-none Capitol and UMG promotion teams and everyone at UMG. I am so proud to represent our always awe-inspiring and talented star-studded roster and their top-notch teams! Thank you to everyone that works in Country radio for the support and love you show our artists, thereby making this honor possible!

My first No. 1 with Capitol/Nashville was Keith Urban f/ Carrie Underwood “The Fighter,” which I didn’t have much of a role in but was still a full-circle moment. I worked with Carrie on “Before He Cheats” at RCA and had always been a huge Keith Urban fan. On a personal level, my sister and I loved “Islands In The Stream” by Kenny and Dolly. At a show in Kentucky, he clearly saw we were real fans and threw us tambourines from the stage which I still have and will obviously always cherish. CAC