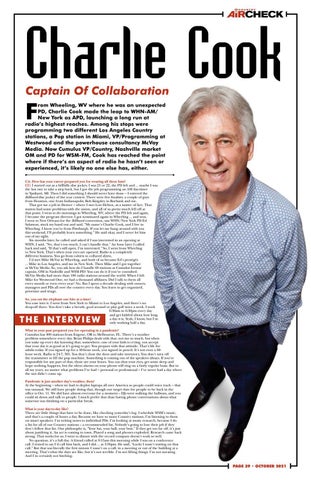 rom Wheeling, WV where he was an unexpected PD, Charlie Cook made the leap to WHN-AM/ New York as APD, launching a long run at radio’s highest reaches. Among his stops were programming two different Los Angeles Country stations, a Pop station in Miami, VP/Programming at Westwood and the powerhouse consultancy McVay Media. Now Cumulus VP/Country, Nashville market OM and PD for WSM-FM, Cook has reached the point where if there’s an aspect of radio he hasn’t seen or experienced, it’s likely no one else has, either.

CA: How has your career prepared you for wearing all these hats? CC: I started out as a hillbilly disc jockey. I was 21 or 22, the PD left and ... maybe I was the last one to take a step back, but I got the job programming an AM day-timer in Ypsilanti, MI. Then I did something I should never have done – I entered the Billboard disc jockey of the year contest. There were five finalists: a couple of guys from Houston, one from Indianapolis, Bob Kingsley in Burbank and me. That got me a job in Denver – where I met Lon Helton, as a matter of fact. That station had some problems with the union, and all of us pretty much fell off at that point. I went to do mornings in Wheeling, WV, where the PD left and again, I became the program director. I got nominated again in Wheeling ... and won. I went to New Orleans for the Billboard convention, saw WHN/New York PD Ed Salamon, stuck my hand out and said, “My name’s Charlie Cook, and I live in Wheeling. I know you’re from Pittsburgh. If you let me hang around with you this weekend, I’ll probably learn something.” He said okay, and I never let him out of my sight. Six months later, he called and asked if I was interested in an opening at WHN. I said, “No, that’s too much. I can’t handle that.” An hour later I called back and said, “If that’s still open, I’m interested.” So, I went from Wheeling to New York. That’s when your eyes are opened. Radio is a completely different business. You go from t-shirts to collared shirts. I’d met Mike McVay in Wheeling, and both of us became Ed’s protégés ... Mike in Los Angeles, and me in New York. Then Mike and I got together at McVay Media. So, you ask how do I handle 60 stations as Cumulus format captain, OM in Nashville and WSM PD? You can do it if you’ve consulted. McVay Media had more than 100 radio stations around the world. When I left Mike for Westwood One, we had a thousand affiliates. Did I talk to them all every month or even every year? No. But I spent a decade dealing with owners, managers and PDs all over the country every day. You learn to get organized, prioritize and triage. So, you eat the elephant one bite at a time? You ease into it. I went from New York to Miami to Los Angeles, and there’s no drop-off there. You don’t take a breath, goof around or play golf twice a week. I work 6:30am to 6:30pm every day and get kidded about how long a day it is. Yeah, I know, but I’m only working half a day.

What in your past prepared you for operating in a pandemic? Cumulus has 490 stations from Eugene, OR to Melbourne, FL. There’s a weather problem somewhere every day. Brian Philips deals with that, not me so much, but when you wake up every day knowing that, somewhere, one of your kids is crying, you accept that your day is as good as it’s going to get. You prepare with that attitude. That’s life for adults today. If you signed up for a 40-hour week, you signed in pencil. It’s not even a 60hour week. Radio is 24-7, 365. You don’t close the door and take inventory. You don’t turn off the transmitter to fill the pop machine. Something is coming out of the speakers always. If you’re responsible for any part of that, those are your hours. You can shut your eyes, get some sleep and hope nothing happens, but the silent alarms on your phone will ring on a fairly regular basis. But in all my years, no matter what problems I’ve had – personal or professional – I’ve never had a day where the sun didn’t come up. Pandemic is just another day’s weather, then? At the beginning – when we had to deploy laptops all over America so people could voice track – that was unusual. We still have people doing that, though our target date for people to be back in the office is Oct. 11. We did have almost everyone for a moment – DJs were walking the hallways, and you could sit down and talk to people. I much prefer that than having phone conversations about what someone was thinking on a particular break. What is your day-to-day like? There are little things that have to be done, like checking yesterday’s log. I schedule WSM’s music, and that’s a couple of hours a day. Because we have so many Country stations, I’m listening to them on smart speakers. I’m writing notes to individual PDs. I’m looking at music research, because I do a list for all of our Country stations – a recommended list. Nobody’s going to lose their job if they don’t follow that list. Our philosophy is, “Your bat, your ball, your butt.” If they get too far off, it’s just about justifying it. An act is coming to town. Played a song and phones exploded. Research came back strong. That works for us. I went to dinner with the record company doesn’t work so well. No question, it’s a full day. A friend called at 9:15am this morning while I was on a conference call. I texted to say I’d call him back, and I did ... at 3:36pm. He said, “Lucky I wasn’t waiting on that call.” But that was literally the first minute I wasn’t on a call, in a meeting or out of the building at a meeting. That’s what the days are like, but it’s not terrible. I’m not lifting things. I’m not sweating. And I’m certainly not bitching.