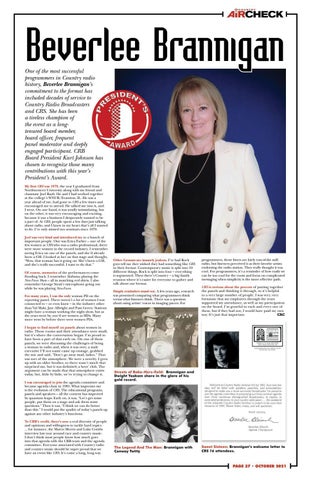 One of the most successful programmers in Country radio history, Beverlee Brannigan’s commitment to the format has included decades of service to Country Radio Broadcasters and CRS. She has been a tireless champion of the event as a longtenured board member, board officer, frequent panel moderator and deeply engaged participant. CRB Board President Kurt Johnson has chosen to recognize those many contributions with this year’s President’s Award.

My first CRS was 1979, the year I graduated from Northwestern University along with my friend and classmate Joel Raab. He and I had worked together at the college’s WNUR/Evanston, IL. He was a year ahead of me, had gone to CRS a few times and encouraged me to attend. He talked me into it, and I went. On one hand, it was totally intimidating, but on the other, it was very encouraging and exciting, because it was a business I desperately wanted to be a part of. At CRS, people spent a few days just talking about radio, and I knew in my heart that’s all I wanted to do. I’ve only missed two seminars since 1979. Joel was very kind and introduced me to a bunch of important people. One was Erica Farber – one of the few women at CRS who was a radio professional; there were more women in the record industry. I remember seeing Erica on one of the panels, and she’d already been a GM. I looked at her on that stage and thought, “Wow, that woman has it going on. She’s been a GM, and she’s really successful. I want to do that.” Of course, memories of the performances come flooding back. I remember Alabama playing the New Faces Show – all in matching red shirts. I also remember George Strait’s microphone going out while he was playing New Faces. For many years, I was the only woman PD on the reporting panel. There weren’t a lot of women I was connected to – or even knew – in the industry other than Val Maki, Jaye Albright and Pam Green. Stations might have a woman working the night show, but as the years went by, you’d see women as MDs. Many more went by before there were women PDs. I began to find myself on panels about women in radio. Those rooms and their attendance were small, but it’s where the conversation began. I’m proud to have been a part of that early on. On one of those panels, we were discussing the challenges of being a woman in radio and, when it was over, a male executive I’ll not name came up onstage, grabbed the mic and said, “Don’t go away mad, ladies.” That was sort of the atmosphere. We were a novelty. I grew up with an older brother, so there wasn’t much that surprised me, but it was definitely a boys’ club. The argument can be made that that atmosphere exists today, but, little by little, we’re trying to change it. I was encouraged to join the agenda committee and became agenda chair in 1985. What impresses me is the evolution of CRS. The educational programs, panels and speakers – all the content has improved by quantum leaps. Early on, it was, “Let’s get some people, put them on a stage and ask them some questions.” Then it was, “I think we can do better than this.” I would put the quality of today’s panels up against any other industry’s functions. To CRB’s credit, there’s now a real diversity of people and opinions and willingness to tackle hard topics ... for instance, the Maren Morris and Luke Combs interview last year around race and country music. I don’t think most people know how much goes into that agenda with the CRB team and the agenda committee. Everyone associated with Country radio and country music should be super proud that we have an event like CRS. It’s come a long, long way.

Other formats are insanely jealous. I’ve had Rock guys tell me they wished they had something like CRS in their format. Contemporary music is split into 10 different things, Rock is split into four – everything is segmented. Then there’s Country – a big family reunion where it’s easier for everyone to gather and talk about our format. Simple reminders stand out. A few years ago, research was presented comparing what programmers think versus what listeners think. There was a question about using artists’ voices in imaging pieces. For

programmers, those liners are fairly run-of-the mill radio, but listeners perceived it as their favorite artists endorsing the radio station. They really thought it was cool. For programmers, it’s a reminder of how easily we can be too cool for the room and focus on complicated messaging when simplicity is the more effective path. CRS is serious about the process of putting together the panels and thinking it through, so it’s helpful to a very large number of people. I was very, very fortunate that my employers through the years supported my attendance, as well as my participation on the board. I’m grateful to each and every one of them, but if they had not, I would have paid my own way. It’s just that important. CAC

Streets of Bake-Hers-field: Brannigan and Dwight Yoakam share in the glare of his gold record.

The Legend And The Man: Brannigan with Conway Twitty