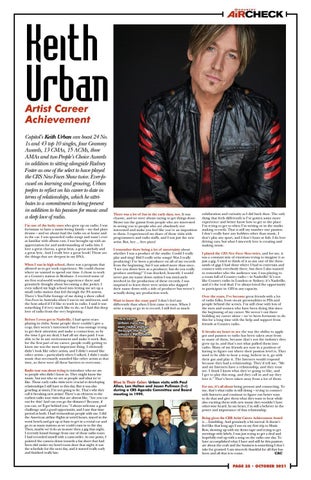 Capitol’s Keith Urban can boast 24 No. 1s and 43 top 10 singles, four Grammy Awards, 13 CMAs, 15 ACMs, three AMAs and two People’s Choice Awards in addition to sitting alongside Radney Foster as one of the select to have played the CRS New Faces Show twice. Ever-focused on learning and growing, Urban prefers to reflect on his career to date in terms of relationships, which he attributes to a commitment to being present in addition to his passion for music and a deep love of radio. I’m one of the lucky ones who grew up on radio. I was fortunate to have a music-loving family – my dad plays drums – and we always had the radio on at home and in the car. I was spoon-fed radio songs and wasn’t ever as familiar with album cuts. I was brought up with an appreciation for and understanding of radio hits. I love a great chorus, a great beat, a great melody and a great lyric. And I really love a great hook! Those are the things that are deepest in my DNA. When I was in high school, there was a program that allowed us to get work experience. We could choose where we wanted to spend our time. I chose to work at a Country station in Brisbane. I received some of my first real-world working experience there and genuinely thought about becoming a disc jockey. I even talked my high school into letting me set up a small radio station that fed through the PA system. There’s YouTube footage of me doing a show called New Faces in Australia when I was in my mid-teens, and the host asked if I’d like to work in radio. I said it was something I’d very much like to do, so I had this deep love of radio from the very beginning. Before I even got to Nashville, I had spent years playing in clubs. Some people there couldn’t give a crap; they weren’t interested that I was onstage trying to get their attention and make a connection, so by the time I got my deal, I had all my dues paid. I was able to be in any environment and make it work. But, for the first part of my career, people really getting to know me was the most important thing. I obviously didn’t look like other artists, and I didn’t sound like other artists – particularly when I talked. I didn’t make music that necessarily sounded like other artists at that time, so there were all these barriers to overcome. Radio tour was about trying to introduce who we are to people who didn’t know us. They might know the music, but not who we are as people and what we’re like. Those early radio visits were crucial to developing relationships I still have to this day. But it was also grueling at times, I’m not going to lie. That’s why they call it breaking new artists! There’s an element to the earliest radio tour visits that are almost like, “Are you cut out for this? And can you go the distance? Because, if you can, we’ll get behind you.” I always welcome a good challenge and a good opportunity, and I saw that time period as both. I had tremendous people with me. I did the American airline flights at weird hours, stayed in the worst hotels and got up at 6am to get in a rental car and go to as many stations as we could cram in to the day. Then, maybe we’d do an in-store then a gig that night. I recently found footage from one of those radio tours I had recorded myself with a camcorder. At one point, I pointed the camera down towards a fax sheet that had been slid under my hotel room door that night; it was the schedule for the next day, and it started really early and finished really late.

There was a lot of fun in the early days, too. It was chaotic, and we were always racing to get things done. Shows ran the gamut from people who are interested in seeing you to people who are absolutely not interested and make you feel like you’re an imposition to them. I experienced my share of those visits with programmers and radio staffs, and I was just the new artist. But, hey ... free pizza! I remember there being a lot of uncertainty about whether I was a product of the studio. Could I really play and sing? Did I really write songs? Was I really producing? I’ve been a producer on all of my records from the beginning, but I was asked more than once, “I see you down here as a producer, but do you really produce anything?” I was shocked, honestly. I would never put my name down unless I was intricately involved in the production of these records. I was surprised to learn there were artists who slapped their name down with a title of producer but weren’t actually doing any production work. Want to know the crazy part? I don’t feel any differently than when I first came to town. When I write a song or go in to record, I still feel as much Jock Jams: Urban runs his own radio station through the high school’s PA system.

Blue Is Their Color: Urban visits with Paul Allen, Lon Helton and Jason Pullman (l-r) during a CRS Agenda Committee and Board meeting in 1999.

exhilaration and curiosity as I did back then. The only thing that feels differently is I’ve gotten some more experience and better know how to get to the place I’m trying to get to when I’m writing or in the studio making records. That is still my number one passion. I don’t really have any hobbies other than music. I don’t play any sport, and I don’t hunt or fish. I do love driving cars, but what I sincerely love is creating and making music. I played the CRS New Faces Show twice, and for me, it was a constant mix of emotions trying to imagine it as just a gig. I tried to think of it as any one of the thousands of gigs I had done where I had to entertain and connect with everybody there, but then I also wanted to remember who the audience was. I was playing to a room full of Country radio – in Nashville! It’s not like Country radio in London or Sydney; it’s Nashville, and it’s the real deal. I’ve always loved the opportunity to participate in CRS in any capacity. Over the years, I’ve become great friends with a lot of radio folks, from on-air personalities to PDs and people behind the scenes. I’m still close with lots of the men and women who have been doing this since the beginning of my career. We weren’t out there building my career alone – we’ve been fortunate to do this for a long time with the help and support from friends at Country radio. It breaks my heart to see the way the ability to apply gut and passion to radio has been taken away from so many of them, because that’s not the industry they grew up in, and that’s not what pulled them into radio. Many of my friends are now in a position of having to figure out where their passion level is. They used to be able to hear a song, believe in it, go with their gut and play it. The listeners would respond because they had a relationship. They’d tell me, “Me and my listeners have a relationship, and they trust me. I think I know what they’re going to like, and I get to play this song, and they call in and say they love it.” That’s been taken away from a lot of them. For me, it’s all about being present and connecting. To me, that’s what radio is still doing – trying to connect with listeners and continue to figure out better ways to do that and give them what they want to hear while also exciting them with new music they wouldn’t have otherwise heard. In my heart, I’m still a believer in the power and importance of that relationship. Being given the CRB Artist Career Achievement Award is ... humbling. And genuinely a bit surreal. It doesn’t feel like that long ago I was on my first trip to Music Row, showing up with my demo tape and trying to get meetings with labels. I was just trying to get a deal and hopefully end up with a song on the radio one day. To have accomplished what I have and still be this passionate about the craft and the business is something I don’t take for granted. I am sincerely thankful for all that has been and all that is to come. CAC