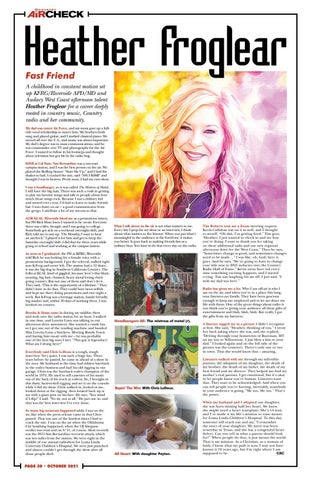 A childhood in constant motion set up KFRG/Riverside APD/MD and Audacy West Coast afternoon talent Heather Froglear for a career deeply rooted in country music, Country radio and her community. My dad was career Air Force, and my mom gave up a fullride vocal scholarship to marry him. My brothers both sang and played guitar, and I studied classical piano. We moved all over the U.S., and music was always important. My dad’s degree was in mass communications, and he was commander over TV and photography for the Air Force. I wanted to follow in his footsteps and thought about television but got bit by the radio bug. KSSB at Cal State/San Bernardino was a one-watt campus station, and I was the first person on the air. We played the Rolling Stones’ “Start Me Up,” and I had the shakes so bad. I cracked the mic, said “106.3 KSSB” and thought I was in heaven. Pretty soon, I had my own show. I was a headbanger, so it was called The Mistress of Metal; I still have the big hair. There was such a rush in getting to play my favorite songs and talk to people about how much those songs rock. Because I was a military kid and moved every year, I’d had to learn to make friends fast. I was chatty on air – a good communicator from the get-go. I attribute a lot of my success to that. AOR KCAL/Riverside hired me as a promotions intern, but PD Rick Shaw knew I wanted to be on-air. Everyone there was a lifer, though, and I was going to college. Somebody got sick on a weekend overnight shift, and Rick told me to suit up. “On Monday, I want to hear an aircheck.” I played it for him and got to keep the Saturday overnight shift. I did that for three years while going to school and working at the campus station.

What I talk about on the air is not what matters to me. Every day I prep for my show or an interview, I think about what matters to the listener. When you put what’s meaningful to the audience at the forefront, it makes you better. It goes back to making friends fast as a military brat. You have to do that every day on the radio.

As soon as I graduated, the PD at KFRG/Riverside told Rick he was looking for a female voice with a promotions background. I got the referral, walked right into K-Frog and never left. The station had a 12 share; it was the big dog in Southern California Country. The folks at KCAL kind of giggled, because here’s this blackwearing, big hair, chained, heavy metal loving chick going country. But not one of them said don’t do it. They said, “This is the opportunity of a lifetime.” They didn’t have to do that. They could have been selfish and kept me there doing promotions and one night a week. But K-Frog was a heritage station, family friendly, big market and, within 30 days of working there, I was hooked on country. Brooks &amp; Dunn came in during my midday show and took over the radio station for an hour. I walked in one time, and Loretta Lynn was talking to our afternoon drive announcer. She wanted a candy bar, so I got one out of the vending machine and handed Miss Loretta Lynn a Snickers. Meeting Randy Travis and having him on-air with me – he was probably one of the first big stars I met. “This guy is legendary! What am I doing here?” Everybody said Chris LeDoux is a tough, tough interview. Very quiet. I was such a huge fan. Three years before he passed, he came in ahead of a show in the area. My husband at the time had ridden bareback in the rodeo business and had his old rigging in our garage. Chris was the bareback rodeo champion of the world in 1974. He used to sell cassettes of his music out of the back of his truck at rodeos. So, I brought in this dusty, beat-to-hell rigging and set it on the console while I did my show. Chris walked in, looked at me, looked down at the rigging, then looked back up at me with a giant grin on his face. He says, “You mind if I dip?” I said, “No sir, not at all.” He put one in, and that was the best interview I’ve ever done. So many big moments happened while I was on the air, like when the press release came in that Chris passed. That was one of the hardest times I had to crack the mic. I was on the air when the Oklahoma City bombing happened, when the OJ Simpson verdict was read and on 9/11, of course. Most recently was the 2015 San Bernardino terrorist attack, which was two miles from the station. We were right in the middle of our annual radiothon for Loma Linda University Children’s Hospital. We were just panicked and almost couldn’t get through the show after all those people died.

Tim Roberts sent me a Zoom meeting request. Kevin Callahan was on it as well, and I thought to myself, “Oh shit, I’m getting fired.” Tim goes, “Heather, I just wanted to check in and see how you’re doing. I want to thank you for taking on these additional tasks and our new regional afternoon drive for the West Coast.” Then he says, “Sometimes change is good, and sometimes changes need to be made ...” I was like, oh, God, here it goes. And he says, “We’re going to have to change your title now to 2021 inductee into the Country Radio Hall of Fame.” Kevin turns beet red every time something exciting happens, and I started crying. Tim was laughing his ass off. I just said, “I wish my dad was here.” Radio has given me a lot. Who I am off-air is who I am on the air, and when you’re in a place this long, your listeners are family. They have been gracious enough to keep me employed and to let me share my life with them. One of the great things about radio is you think you’re giving your audience all these gifts of entertainment and blah, blah, blah. But really, I got the gifts from my listeners.

Headbangers All: The mistress of metal (r).

Ropin’ The Win: With Chris LeDoux.

All Heart: With daughter Peyton.

A listener tagged me in a picture I didn’t recognize at first. She said, “Heather, thinking of you.” I wrote her back asking where she was, and she replied, “Driving through your hometown of Bozeman, MT on my way to Yellowstone. I just blew a kiss to your dad.” I looked again and on the left side of the picture was the cemetery. There’s only one or two in town. That she would know that – amazing. Listeners walked with me through my infertility journey, the adoption of my daughter, the death of my brother, the death of my father, the death of my best friend and my divorce. They helped me find my mother’s real parents. I get emotional, but it’s okay to let people know you’re human. Listeners want that. They want to be acknowledged. And when you can tell people you’re hurting, inevitably, somebody in your audience is going, “Me too. Me too.” That’s the power. When my husband and I adopted our daughter, she was born missing half her heart. We knew she might need a heart transplant. She’s 14 now, and I’ve made it my life’s mission to raise money for Loma Linda Children’s Hospital. To this day, someone will reach out and say, “I remember the story of your daughter. My niece was born yesterday in Texas, and she has a congenital heart defect. Can you tell us what a parent should look for?” When people do that, it just means the world. That is my mission. As a Christian, as a woman of faith, I know what my path is now. I may not have known it 10 years ago, but I’m right where I am supposed to be. CAC