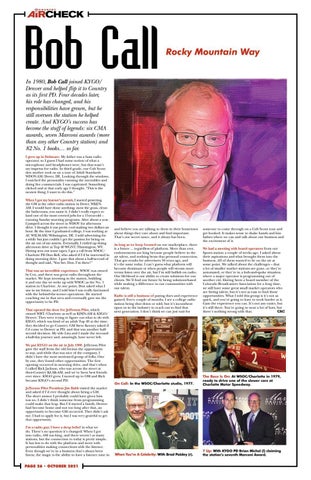 In 1980, Bob Call joined KYGO/ Denver and helped flip it to Country as its first PD. Four decades later, his role has changed, and his responsibilities have grown, but he still oversees the station he helped create. And KYGO’s success has become the stuff of legends: six CMA awards, seven Marconi awards (more than any other Country station) and 82 No. 1 books… so far.

I grew up in Delaware. My father was a ham radio operator, so I guess I had some notion of what a microphone and headphones were, but that wasn’t my impetus for radio. In third grade, our Cub Scout den mother took us on a tour of Adult Standards WDOV-AM/Dover, DE. Looking through the windows, I watched the personality running the turntables and doing live commercials. I was captivated. Something clicked and at that early age I thought, “This is the neatest thing; I want to do this.” When I got my learner’s permit, I started pestering the GM at the other radio station in Dover, WKENAM. I would have done anything: mow the grass, clean the bathrooms, you name it. I didn’t really expect to land one of the most coveted jobs for a 15-year-old – running Sunday morning programs. After about a year, I jumped across the street to WDOV for afternoon drive. I thought it was pretty cool making two dollars an hour. By the time I graduated college, I was working at AC WILM-AM/Wilmington, DE. I sold advertising for a while but just couldn’t get the passion for being on the air out of my system. Eventually, I ended up doing afternoon drive at Top 40 WGNT/Huntington, WV. Having sent out some tapes, I got a call from WSOC/ Charlotte PD Don Bell, who asked if I’d be interested in doing morning drive. I gave that about a half-second of thought and said, “You bet, Don. I’m there!” That was an incredible experience. WSOC was owned by Cox, and there was great radio throughout the market. We kept investing in the station, building it and one day we woke up with WSOC as the No. 1 station in Charlotte. At one point, Don asked what I saw in my future, and I told him I was really fascinated with the behind-the-scenes operations. He started coaching me in that area and eventually gave me the opportunity to be PD. That opened the door for Jefferson Pilot, which owned WBT/Charlotte as well as KIMN-AM &amp; KYGO/ Denver. They were trying to figure out what to do with KYGO, which was kind of an adult Top 40 at the time; they decided to go Country. GM Steve Keeney asked if I’d come to Denver as PD, and that was another halfsecond decision. My wife Lisa and I made the two-anda-half-day journey and, amazingly, have never left. We put KYGO on the air in July 1980. Jefferson Pilot gave the staff from the old format the opportunity to stay, and while that was nice of the company, I didn’t have the most motivated group of folks. One by one, they found other opportunities. The first opening occurred in morning drive, and that’s when I called Rick Jackson, who was across the street at then-Country KLAK-AM, and we’ve been best friends ever since. KYGO grew, I moved up to OM and Rick became KYGO’s second PD.

and believe you are talking to them in their hometown about things they care about and find important. That’s our secret sauce, and it always has been. As long as we keep focused on our marketplace, there is a future ... regardless of platform. More than ever, endorsements are king because people believe in the air talent, and nothing beats that personal connection. That got results for advertisers 50 years ago, and it’s the same today. I can’t guess what platform will become dominant or when people will stream more versus listen over the air, but I’m still bullish on radio. Our lifeblood is our ability to create solutions for our clients. We’ll find our future by being solutions-based while making a difference in our communities with our talent. Radio is still a business of paying dues and experience gained. Every couple of months, I see a college radio station being shut down or sold, but it’s incumbent upon us in the industry to reach out to find that next generation. I don’t think we can just wait for

We had a meeting with board operators from our Sports station a couple of weeks ago. I asked about their aspirations and what brought them into the business. All of them wanted to be on the air at some point. We talked about the challenges – that a lot of smaller market stations are gone, or they’re automated, or they’re in a hub-and-spoke situation where a major operator is programming out of another city. Having been a board member of the Colorado Broadcasters Association for a long time, we still have some great small market operators who are hiring talent, but it’s not as easy to find those opportunities. What I told this group is it’s not as quick, and you’re going to have to work harder at it. Gain the experience you can. It’s not any easier, but it’s still there. You’re going to wear a lot of hats, but there’s nothing wrong with that. CAC

The Race Is On: At WSOC/Charlotte in 1979, ready to drive one of the slower cars at Charlotte Motor Speedway.

When You’re A Celebrity: With Brad Paisley (r).

Jefferson Pilot President Jim Babb visited the market and asked if I’d ever thought about being a GM. The short answer I probably could have given him was no. I didn’t think someone from programming could make that leap. But I’d started a family, Denver had become home and not too long after that, an opportunity to become GM occurred. They didn’t ask me; I had to apply for it, but I was very grateful to get that opportunity. I’m a radio guy; I have a deep belief in what we do. There’s no question it’s changed. When I got into radio, AM was king, and there weren’t as many stations, but the connection to today is pretty simple. It has less to do with the platform and more with personalities making connections with the listener. Even though we’re in a business that’s always been linear, the magic is the ability to have a listener tune in

someone to come through on a Cub Scout tour and get hooked. It makes sense to shake hands and kiss babies where we can and talk about our business and the excitement of it.