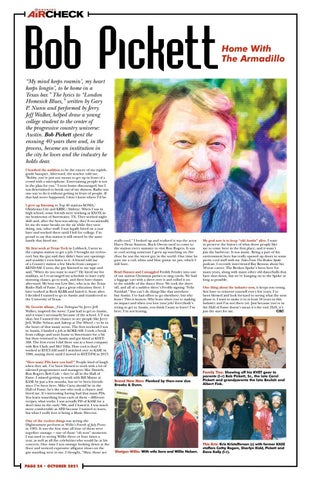 Home With The Armadillo

“My mind keeps roamin’, my heart keeps longin’, to be home in a Texas bar.” The lyrics to “London Homesick Blues,” written by Gary P. Nunn and performed by Jerry Jeff Walker, helped draw a young college student to the center of the progressive country universe: Austin. Bob Pickett spent the ensuing 40 years there and, in the process, became an institution in the city he loves and the industry he holds dear.

I bombed the audition to be the emcee of my eighthgrade banquet. Afterward, the teacher told me, “Bobby, you’re just not meant to get up in front of a crowd with a microphone. Entertaining people is not in the plan for you.” I went home discouraged, but I was determined to break out of my shyness. Radio was one way to do it without getting in front of people. If that had never happened, I don’t know where I’d be. I grew up listening to Top 40 stations KOMA/ Oklahoma City and KRBC/Abilene. When I was in high school, some friends were working at KXOX in my hometown of Sweetwater, TX. They worked night shift and, after the boss was asleep, they’d occasionally let me do some breaks on the air while they were doing, um, other stuff. I was legally hired on a year later and worked there until I left for college. I’m proud to say that station is still owned by the same family that hired me. My first week at Texas Tech in Lubbock, I went to the campus station to get a job. I brought my reel-toreel, but the guy said they didn’t have any openings and wouldn’t even listen to it. A friend told me of a Country station a few blocks from campus – KEND-AM. I went, the guy listened to my tape and said, “When do you want to start?” He hired me for middays, so I re-arranged my schedule to have early morning classes, go to work, and then have classes afterward. My boss was Lew Dee, who is in the Texas Radio Hall of Fame. I got a great education there. I later worked at Rock KLBK and hated it. Soon after, I decided I wanted to go to Austin and transferred to the University of Texas. My favorite album, ¡Viva Terlingua! by Jerry Jeff Walker, inspired the move. I just had to get to Austin, and it wasn’t necessarily because of the school. UT was okay, but I wanted the chance to see people like Jerry Jeff, Willie Nelson and Asleep at The Wheel – to be in the heart of that music scene. The first weekend I was in Austin, I landed a job at KOKE-AM. I took a break from college and went home to Sweetwater for a bit but then returned to Austin and got hired at KVETAM. The first event I did there was at a boot company with Roy Clark and Mel Tillis. How cool is that? I worked at KVET-AM until I switched over to KASE in 1986, staying there until I moved to KVET-FM in 2013. “How many PDs have you had?” People kind of laugh when they ask. I’ve been blessed to work with a lot of talented programmers and managers: Mac Daniels, Ron Rogers, Bob Cole – they’re all in the Hall of Fame. I missed getting to work with Bill Mayne at KASE by just a few months, but we’ve been friends since I’ve been here. Mike Carta should be in the Hall of Fame; he’s the one who took a chance and hired me. It’s interesting having had that many PDs. You learn something from each of them – different recipes, what works. I was actually PD of KASE for a short time in the early ‘90s, and I hated it. I was much more comfortable as APD because I wanted to learn, but what I really love is being a Music Director. One of the coolest things was seeing the Highwaymen perform at Willie’s Fourth of July Picnic in 1985. It was the first time all four of them were together onstage – one of those “oh wow” moments. I was used to seeing Willie three or four times a year, as well as all the celebrities who would be at his concerts. One time I was onstage looking down at the floor and noticed expensive alligator shoes on the guy standing next to me. I thought, “Man, those are

really cool.” I looked up and realized it was the actor Harry Dean Stanton. Buck Owens used to come to the station every summer to visit Ron Rogers. It was so cool seeing someone I grew up watching on Hee Haw; he was the nicest guy in the world. One time he gave me a red, white and blue guitar tie pin, which I still have. Brad Hansen and I smuggled Freddy Fender into one of our station Christmas parties to sing carols. We had a luggage cart with a sheet over it and rolled it on to the middle of the dance floor. We took the sheet off, and all of a sudden there’s Freddy signing “Feliz Navidad.” You can’t do things like that anywhere but Austin. I’ve had offers to go elsewhere, but why leave? This is heaven. Why leave when you’re making an impact and when you love your job? Everybody’s trying to get to Austin, you think I want to leave? I’m here. I’m not leaving.

My goal now is to keep “old Austin” alive. I want to preserve the history of what drove people like me to come here in the first place, and it wasn’t just the barbecue. It was music. Being a part of the environment here has really opened up doors to some pretty cool stuff with my Tales From The Broken Spoke podcast. I recently interviewed Ray Benson about his 50-year career. The Broken Spoke’s been here for many years, along with many other old dancehalls that have shut down, but we’re hanging on to the Spoke as long as possible. One thing about the industry now, it keeps you young. You have to reinvent yourself every few years. I’ve been blessed and look forward to seeing what the next phase is. I want to make it to at least 50 years in this industry and I’m not there yet. Just because you’re in the Hall of Fame doesn’t mean it’s the end. Hell, it’s just the start for me. CAC