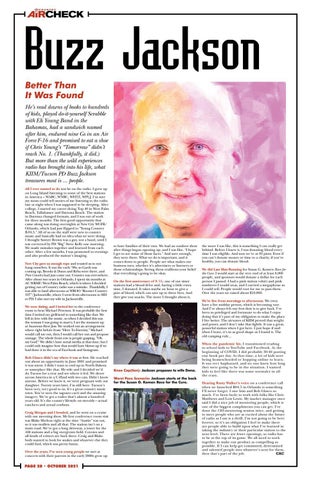 Buzz Jackson Better Than It Was Found

He’s read dozens of books to hundreds of kids, played do-it-yourself Scrabble with Eli Young Band in the Bahamas, had a sandwich named after him, endured nine Gs in an Air Force F-16 and promised to eat a shoe if Chris Young’s “Tomorrow” didn’t reach No. 1. (Thankfully, it did.) But more than the wild experiences radio has brought into his life, what KIIM/Tucson PD Buzz Jackson treasures most is ... people. All I ever wanted to do was be on the radio. I grew up on Long Island listening to some of the best stations in America – WABC, WNBC, WHTZ, WPLJ. I’m sure my mom could tell stories of me listening to the radio late at night when I was supposed to be sleeping. After college, I started my career doing Top 40 in West Palm Beach, Tallahassee and Daytona Beach. The station in Daytona changed formats, and I was out of work for three months. The first good opportunity that came along was doing overnights at New City WCFB/ Orlando, which had just flipped to “Young Country B-94.5.” All of us on the staff were new to country music and basically had no idea what we were doing. I thought Sawyer Brown was a guy, not a band, until I was corrected by PD “Big” Steve Kelly one morning. We made mistakes together and learned from each other. After a few months, I was promoted to evenings and also produced the station’s imaging. New City gave us enough rope and trusted us to not hang ourselves. It was the early ‘90s, so Garth was coming up, Brooks &amp; Dunn and Reba were there, and Pure Country had just come out. Country was everywhere. After about two years in Orlando, I spent six months at AC WRMF/West Palm Beach, which is where I decided getting out of Country radio was a mistake. Thankfully, I was able to land afternoons at WROO “Rooster Country 107”/Jacksonville, where I went from afternoons to MD to PD. I also met my wife in Jacksonville.

to have families of their own. We had an outdoor show after things began opening up, and I was like, “I hope I get to see some of those faces.” And sure enough, they were there. What we do is important, and it comes down to people. People are what makes our business turn, whether it’s advertisers or listeners or those relationships. Seeing them reaffirms your belief that everything’s going to be okay. On the first anniversary of 9/11, one of our sister stations had a blood drive and, having a little extra time, I donated. It takes maybe an hour to give a pint of blood, which can save up to three lives. And they give you snacks. The more I thought about it,

We were dating, and I invited her to the conference room to hear Michael Peterson. It was probably the first time I invited my girlfriend to something like that. We fell in love with the music, so when I decided this was the woman I was going to marry, I set the moment up at Suwannee River Jam. We worked out an arrangement where right before from “Here To Eternity,” Michael would call me out, then I would call her out and propose onstage. The whole front row is people gasping, “Oh my God!” We didn’t have social media at that time, but I could only imagine how that would have blown up if we had done it in the era of Facebook and Instagram. Bob Glasco didn’t say where it was at first. He reached out about an opportunity in June 2001 and promised it was warm. I didn’t want to end up in North Dakota or someplace like that. My wife and I decided we’d do Tucson for a year and see where it led. We drove across America in a U-Haul with two cats. Didn’t know anyone. Before we knew it, we were pregnant with our daughter. Twenty years later, I’m still here. Tucson’s been very, very good to us. It’s a great country music town. You’ve seen the saguaro cacti and the amazing imagery. We’ve got a rodeo that’s almost a hundred years old. It’s the country lifestyle on steroids – actual ranchers and actual cowboys. Craig Morgan and I bonded, and he went on a cruise with our morning show. My first conference room visit was Blake Shelton right at the time “Austin” was out, so it was mullets and all that. The station isn’t on a main road. We’ve got a long driveway, a tower for the AM stations and a big overgrown field. Coyotes and all kinds of critters are back there. Craig and Blake both wanted to look for snakes and whatever else they could find, which was pretty funny. Over the years, I’ve seen young people we met at concerts with their parents in the early 2000s grow up

Knee Cap(tion): Jackson proposes to wife Dena. Worst Pace Scenario: Jackson starts at the back for the Susan G. Komen Race for the Cure.

the more I was like, this is something I can really get behind. Before I knew it, I was donating blood every time I was eligible. And now we’re at 93 pints. Even if you can’t donate money or time to a charity, if you’re healthy, you can donate blood. We did Last Man Running for Susan G. Komen Race for the Cure. I would start at the very end of at least 8,000 people, and sponsors would donate a dollar for each person I passed. I had a pink station t-shirt and pink sombrero I would wear, and I carried a megaphone so I could yell. People would root for me to pass them. Over the years we raised about $10,000. We’re live from mornings to afternoons. We even have a live midday person, which is becoming rare. And I’ve always felt our first duty is to give back. I’ve been so privileged and fortunate to do what I enjoy doing that it’s part of my obligation to make the place I live better. The airwaves of KIIM proved that weight and power, and I don’t take that lightly. It was a great, powerful station when I got here. I just hope if and when I leave, it’s in as good shape as I found it. The old camping rule... When the pandemic hit, I transitioned reading to school kids to YouTube and Facebook. At the beginning of COVID, I did probably 30-40 posting one book per day. At that time, a lot of kids were being homeschooled or hopping online to learn. It was ver y haphazard, and no one knew how long they were going to be in the situation. I wanted kids to feel like there was some normalcy in all the crazy. Hearing Rusty Walker’s voice on a conference call when we launched B94.5 in Orlando is something I’ll never forget. I owe him and Bob Glasco so much. I’ve been lucky to work with folks like Chris Matthews and Lois Lewis. My market manager once said I did a nice job of mentoring people, which is one of the biggest compliments you can get. I’ve done the CRS mentoring session twice, and getting to meet people who are as excited about the future of radio as I am is a thrill. I’m not going to be here forever, so it’s an obligation I feel to make there are people able to build upon what I’ve learned in taking the industry or their particular station to the next level. There are fewer openings, so radio has to be at the top of its game. We all need to work together to make our product as compelling as possible. If I can help get committed, determined and talented people into whatever’s next for them, then that’s part of the job. CAC