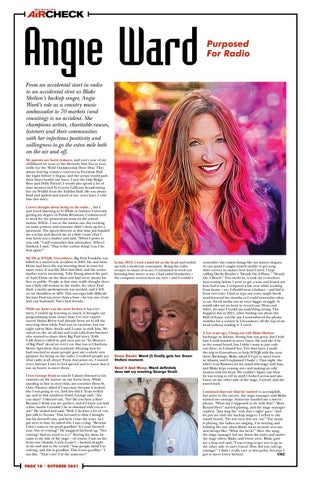 From an accidental start in radio to an accidental stint as Blake Shelton’s backup singer, Angie Ward’s role as a country music ambassador to 70 markets (and counting) is no accident. She champions artists, charitable causes, listeners and their communities with her infectious positivity and willingness to go the extra mile both on the air and off. My parents are horse trainers, and every year of my childhood we went to the Kentucky State Fair in Louisville for the World Championship Horse Show. They always had big country concerts in Freedom Hall the night before it began, and the artists would park their buses beside our barn. I met the Oak Ridge Boys and Dolly Parton! I would also spend a lot of time mesmerized by Coyote Calhoun broadcasting live on WAMZ from the Exhibit Hall. He was always kind and smiled and waved at me; years later, I told him this story. I never thought about being on the radio ... but I sure loved listening to it! While at Auburn University getting my degree in Public Relations, I volunteered to work for the promotions team on the school station, WEGL. I was at the station one day working on some posters, and someone didn’t show up for a sportscast. The sports director at that time just handed me a script and shoved me in a little room (that I now know was a studio) and said, “When I point to you, talk.” I still remember that adrenaline. When I finished, I said, “That is the coolest thing! Can I do that again?” My PD at WTQR/Greensboro, Big Paul Franklin, was killed in a motorcycle accident in 2001. He and Aunt Eloise had been the top morning show in town for many years. It was like Elvis had died, and the entire market was in mourning. Toby Young played the part of Aunt Eloise on the show and had never shown his face in public. People at that time really thought there was a little old woman in the studio. So, when Paul died, a media spokesperson was needed, and it fell on my shoulders as APD. This was especially difficult because Paul was more than a boss – he was one of my and [my husband] Tim’s best friends. While my heart was the most broken it has ever been, I ended up learning so much; it brought our programming team closer than I’ve ever experienced. Dallas Reese had already been set to fill the morning show while Paul was on vacation, but our night talent Marc Steele and I came in with him. We stayed on the air all day and took calls from listeners who wanted to share their Big Paul story. NASCAR drivers called in and even put an “In Memory of Big Paul” decal on every car that ran at Charlotte Motor Speedway that weekend. Hearing how he had touched so many people gave me a whole new purpose for being on the radio. I realized people are what radio is all about! From that point on, I wanted every listener I met to feel special and to know that it was my honor to meet them. I love George Strait so much! I always listened to his cassettes on the tractor on our horse farm. While standing in line to meet him, my coworker Dean St. Clair (Deano) asked if I was okay, because it looked like I was going to cry. And boy did I! Tears welled up, and in that southern drawl, George said, “Are you okay?” I blurted out, “No! Do you have a flaw? Because I think you are perfect, and if I knew you had a flaw, maybe I wouldn’t be as obsessed with you as I am!” He smiled and said, “Well, I do have a lot of ‘em. Just talk to Norma.” Fast forward to what I thought was his farewell tour, and here come the tears. As I got next to him, he asked why I was crying. “Because I don’t want to say good goodbye! It’s your farewell tour. You’re retiring!” He snapped his head up. “Not retiring! And no need to cry!” During the show, he came to my side of the stage – of course, I was on the front row (thanks, Uncle Louie!) – looked straight at me and said to the crowd, “Some people think I’m retiring, and this is goodbye. This is not goodbye.” I was like, “That’s me! I’m the someone!”

In late 2019, I took a hard hit on the head and ended up with a moderate concussion. Being the radio trooper so many of us are, I continued to work not knowing how severe it was. I had awful headaches – the computer screens hurt my eyes – and I couldn’t

remember the easiest things like my station slogans. At one point I caught myself unable to get song titles correct no matter how hard I tried. I kept calling Dierks Bentley’s “Drunk On A Plane,” “Drunk On A Beach.” Two weeks in, it took my co-workers intervening before I went to get a scan and found out how bad it was. I reinjured it last year while working from home – yes, I should wear a helmet – and hid it from everyone. I had to type out every single break word-for-word for months so I could remember what to say. Social media was an even bigger struggle. It would take me an hour to record one 30-second video, because I would say something wrong. The happiest day in 2021, other finding out about the Hall of Fame, was the day I remembered the phone number for a contest in Greensboro off the top of my head without reading it. I cried. A few years ago, I hung out with Blake Shelton backstage in Atlanta. Seeing him was great, but I told him I really wanted to meet Gwen. He said she’d be at the sound board, but I didn’t want to just rush out there, so I missed her. Two days later, I made the trip to Greensboro to help WTQR with the next show. Backstage, Blake asked if I got to meet Gwen in Atlanta, and I explained I hadn’t. That night, the label’s Lou Ramirez let me stand side-stage with him, and Blake kept coming over and making an odd motion with his head. We couldn’t figure out what he was trying to tell us until I looked across and saw Gwen on the other side of the stage. I waved, and she waved back. I assumed that was what he wanted to accomplish, but prior to the encore, the stage manager said Blake wanted me onstage. Someone handed me a microphone. “What am I supposed to do with this?” “Boys Round Here” started playing, and the stage manager replied, “Just sing the ‘ooh that’s right’ part.” And he put me with the backup singers. I yelled to the sound board, “Do not turn this mic on!” The music is playing, the ladies are singing, I’m swaying and holding the mic when Blake turns around, sees me and shrugs like, “What the heck?” After the song, the stage manager led me down the stairs and under the stage where Blake and Gwen were. Blake gave me a hug and said, “I was trying to get you to go to the other side to meet Gwen! How did you end up onstage?” I didn’t really care at that point, because I got to meet Gwen Stefani! CAC