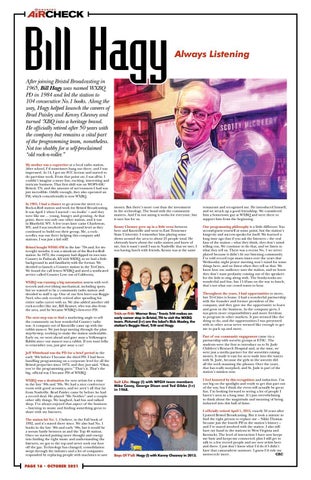 After joining Bristol Broadcasting in 1965, Bill Hagy was named WXBQ PD in 1984 and led the station to 104 consecutive No.1 books. Along the way, Hagy helped launch the careers of Brad Paisley and Kenny Chesney and turned ‘XBQ into a heritage brand. He officially retired after 50 years with the company but remains a vital part of the programming team, nonetheless. Not too shabby for a self-proclaimed “old rock-n-roller.” My mother was a copywriter at a local radio station. After school, I’d sometimes hang out there, and I was impressed. At 14, I got my FCC license and started to do part-time work. From that point on, I was all-in. I couldn’t imagine a more fun, exciting, interesting and intricate business. That first shift was on WOPI-AM/ Bristol, TN, and the amount of nervousness I had was just incredible. Oddly enough, they also operated an FM, which coincidentally is now WXBQ. In 1965, I had a chance to go across the street to a Rock-n-Roll station and work for Bristol Broadcasting. It was April 1 when I started – no foolin’ – and they were like me ... young, hungry and growing. At that point, there was only one other station, and it was in Bluefield, WV. A few years later came Charleston, WV, and I was involved on the ground level as they continued to build out their group. Me, a rockn-roller, was out there helping this company add stations. I was just a kid still! Bristol bought WFHG-FM in the late ‘70s and, for sixto-eight months, it was a simulcast of the Rock-n-Roll station. In 1972, the company had dipped its toes into Country in Paducah, KY with WKYQ, so we had a little background in and familiarity with the format. We decided to launch a Country station in the Tri-Cities. We found the call letters WXBQ and aired a syndicated service called Country Love out of California. WXBQ was running a big automation system with reelto-reels and everything mechanical, including spots, but we wanted to be a community radio station and decided to staff it up. One of our first hires was Reggie Neel, who only recently retired after spending his entire radio career with us. We also added another old rock-n-roller like me, Bill Kramer, who was also from the area, and he became WXBQ’s first-ever PD. The next step was to find a marketing angle to sell the community on how wonderful Country radio was. A company out of Knoxville came up with the rabbit mascot. We just kept moving through the plan step-by-step, working to make the station undeniable. Early on, we went ahead and gave away a Volkswagen Rabbit since our mascot was a rabbit. If you want folks to remember you, just give away a car!

money. But there’s more cost than the investment in the technology. The bond with the community matters. And I’m not saying it works for everyone, but it sure has for us.

restaurant and recognized me. He introduced himself, and we struck up a good friendship. We considered him a hometown guy at WXBQ and were there to support him from the beginning.

Kenny Chesney grew up in a little town between here and Knoxville and went to East Tennessee State University. I remember him playing some shows around the area to about 25 people total. He obviously knew about the radio station and knew of me, but it wasn’t until I was in Nashville that we met. I was having lunch with friends, Kenny was at the same

Our programming philosophy is a little different. You second-guess yourself at some point, but the station’s longevity and success speaks for itself. We learned a long time ago that if you ask the listeners – the real fans of the station – what they think, they don’t mind telling you. We continue to do that, and we listen to what they tell us. There was a recent No. 1 we never played because it didn’t fit our listening community. I’ve told record reps many times over the years that Wednesday night prayer meeting won’t stand for some things here, and we listen when they tell us that. We know how our audience uses the station, and we know they don’t want profanity coming out of the speakers for the kids to sing along with. The honky-tonks are wonderful and fun, but 11:45am on the way to lunch, that’s not what our crowd wants to hear.

Part of our community engagement came via a partnership with sorority groups at ETSU. The students were the first to introduce us to St. Jude Children’s Research Hospital and, at the time, we were just a media partner for the sororities raising money. It made it easy for us to wade into the waters with St. Jude, because the girls in the sorority did all the work manning the phones. Over the years, that has really morphed, and St. Jude is part of the station’s mission now.

Jeff Whitehead was the PD for a brief period in the early ‘80s before I became the third PD. I had been handling programming on a corporate level for all the Bristol properties since 1972, and they just said, “Okay, you’re the programming guru.” That’s it. That’s the big, official way I became PD of WXBQ. WXBQ was a destination for new artists for a time in the late ‘80s and ‘90s. We had a nice conference room with good acoustics, and we aren’t all that far from Nashville. Brad Paisley came by before he had a record deal. He played “Me Neither” and a couple other silly things. We laughed, had fun and talked shop. I’ve always enjoyed that aspect of the business – listening to music and finding something great to share with my listeners. The station hit No. 1, I believe, in the Fall book of 1992, and it’s stayed there since. We also had No. 1 books in the late ‘80s and early ‘90s, but it would be a seesaw battle between us and the Top 40 station. Once we started putting more thought and energy into finding the right music and understanding the listeners, we got to the top and never took our foot off the gas. Technology has changed, consolidation swept through the industry and a lot of companies responded by replacing people with machines to save

Throughout the years, I had opportunities to move, but Tri-Cities is home. I had a wonderful partnership with the founder and former president of the company, and they gave me the opportunity to learn and grow in the business. As the company grew, I was given more responsibilities and more freedom to program in other markets. It just seemed like the thing to do, and the opportunities I was presented with in other areas never seemed like enough to get me to pack up and move.

I feel honored by this recognition and induction. I’m not big on the spotlight and ready to get that part out of the way, but I think the event will actually be great fun. I’m looking forward to seeing a lot of people I haven’t seen in a long time. It’s just overwhelming to think about the magnitude and meaning of being inducted into this hall of fame. I officially retired April 1, 2015, exactly 50 years after I joined Bristol Broadcasting. But it took a minute to find the right person to replace me – Nikki Thomas became just the fourth PD in the station’s history – and I’ve stayed involved with the station. I also still have my hand in the stations in West Virginia and Kentucky. The level of interaction I have now keeps me busy and keeps me connected, plus I still get to talk to a few record people and see new artists here and there. I just don’t know what I’d do if I didn’t have that camaraderie anymore. I guess I’d ride my motorcycle more. CAC