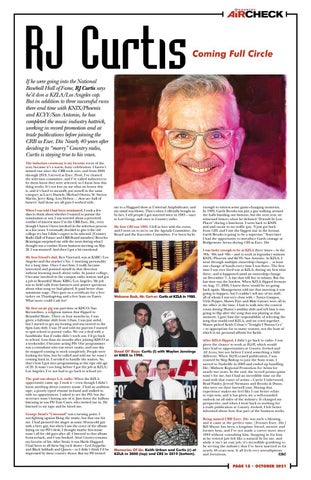 If he were going into the National Baseball Hall of Fame, RJ Curtis says he’d don a KZLA/Los Angeles cap. But in addition to three successful runs there and time with KNIX/Phoenix and KCYY/San Antonio, he has completed the music industry hattrick, working in record promotion and at trade publications before joining the CRB as Exec. Dir. Nearly 40 years after deciding to “marry” Country radio, Curtis is staying true to his vows. The induction ceremony is my favorite event of the year, because it’s a warm, fuzzy celebration. I haven’t missed one since the CRB took over, and from 2008 through 2018, I served as Exec. Prod. I’ve chaired the selection committee, and I’ve called inductees to let them know they were selected, so I know how this thing works. It’s not lost on me what an honor this is, and it’s hard to mentally put myself in the same category as Larry Daniels, Michael Owens, W. Steven Martin, Jerry King, Lon Helton ... those are hall of famers! And those are all guys I worked with. When I was told I had been nominated, I took a few days to think about whether I wanted to pursue the nomination or not. I was worried about a perceived conflict of interest since I’m the CRB Exec. Dir., even though I haven’t been involved in the selection process in a few years. I eventually decided to give it the old college try, but I didn’t expect to be selected. [Country Radio Hall of Famer and CRB Board member] Beverlee Brannigan surprised me with the news during what I thought was a routine Zoom business meeting on May 26. I was stunned! And then I got a bit emotional.

My best friend’s dad, Ken Vineyard, was at KABC/Los Angeles and the market’s No. 1 morning personality for a long time. Once I met him, I really became interested and pointed myself in that direction without knowing much about radio. In junior college, I became involved in the campus radio station and got a job at Beautiful Music KBIG/Los Angeles. My job was to field calls from listeners and answer questions about what song we had played. It paid better than minimum wage. They gave us a certificate for a free turkey on Thanksgiving and a free ham on Easter. What more could I ask for? My first on-air gig was part-time at KDUO/San Bernardino, a religious station that flipped to Beautiful Music. Three or four months in, I was given a full-time shift from 1-9am. I was just awful, but I started to get my footing and was moved to the 6pm-1am shift. I was 19 and told my parents I wanted to quit school to pursue radio. We cut a deal with a handshake that if radio didn’t work out, I’d go back to school. Less than six months after joining KDUO as a weekender, I became acting PD. Our programmer was a consultant who was never onsite, and one day he stopped coming to work completely. People were looking for him, but he called and told me he wasn’t coming back in. I needed to handle the station. So, that’s how I got into programming at the ripe old age of 20. It wasn’t too long before I got the job at KZLA/ Los Angeles; I’ve not had to go back to school yet.

me to a Haggard show at Universal Amphitheater, and my mind was blown. That’s when I officially bought in. In fact, I tell people I got married twice in 1983 – once to Lori Gregg, and once to Country radio. My first CRS was 1985. I fell in love with the event, and I went on to serve on the Agenda Committee, the Board and the Executive Committee. I’ve been lucky

The goal was always L.A. radio. When the KZLA opportunity came up, I took it – even though I didn’t know anything about country music. I had an audition tape, a poorly typed résumé in-hand and walked in with no appointment. I asked to see the PD, but the secretary wasn’t having any of it. Just down the hallway listening in was PD Tom Casey, who invited me in. He listened to my tape and he hired me. George Strait’s “Unwound” was a turning point. I was fighting against liking the music, but that one hit me. I had pictured the singer as some 50-year-old guy with a beer gut, but when I saw the cover of the album laying on my PD’s desk, I thought maybe this music wasn’t all for old guys after all. I listened to that album front-to-back, and I was hooked. Strait Country remains my favorite of his. After Strait, it was Merle Haggard. I had been to all these big rock shows – Led Zeppelin and Black Sabbath and Queen – so I didn’t think I’d be impressed by these country shows. But my PD invited

enough to witness some game-changing moments. In 1989, Garth Brooks was just a guy walking around the halls handing out buttons, but the next year, we witnessed history when he debuted “Friends In Low Places” during a luncheon. I went back to KNIX and said on-air to my traffic guy, “I just got back from CRS, and I saw the biggest star in the format. Garth Brooks is going to be a superstar.” Years later I had the opportunity to introduce Garth onstage at Bridgestone Arena during CRS as Exec. Dir. I was lucky enough to be at KZLA three times – in the ‘80s, ‘90s and ‘00s – and to work at legendary stations KNIX/Phoenix and KCYY/San Antonio. At KZLA, I went through multiple ownership changes ... at least one change of hands every time I was there. The first time I was ever fired was at KZLA, during my first stint there, and it happened amid an ownership change on December 7. A day that will live in infamy. But the last time was the hardest. When KZLA flipped formats on Aug. 17, 2006, I knew there would be no going back again. Management told me that morning it was going to happen, but I couldn’t tell any of my staff, all of whom I was very close with – Tonya Campos, Vicki Pepper, Shawn Parr and Blair Garner were all in the office at the time. I had to walk into the control room during Shawn’s midday shift and tell him it was going to flip after the song that was playing at that moment. I gave him the responsibility of selecting the song that would end KZLA, and we cried together. Shawn picked Keith Urban’s “Tonight I Wanna Cry” – so appropriate for so many reasons, not the least of which is my personal affinity for Keith. After KZLA flipped, I didn’t go back to radio. I was given the chance to work at R&amp;R, which would later lead to opportunities at Country Aircheck and All Access, but not before I tried something a little different. When R&amp;R ceased publication, I was courted by Skip Bishop to join the Sony team. I moved to Nashville in 2009 and ended up handling Dir./Midwest Regional Promotion for Arista for nearly two years. In the end, the record promo game wasn’t for me, but I had an incredible time on the road with that roster of artists – Carrie Underwood, Brad Paisley, Jerrod Niemann and Brooks &amp; Dunn, who were on their farewell tour. Having that experience makes me feel like I can better relate to reps now, and it has given me a well-rounded outlook on all sides of the industry. It changed my perspective, and when I went back to working for a trade publication at Country Aircheck, I felt better informed about how that part of the business works. Being named CRB Exec. Dir. was such a blessing, and it came at the perfect time. [Former Exec. Dir.] Bill Mayne has been a longtime friend, mentor and former boss, and I’ve not made a career move since 1983 without consulting him. Stepping in for him as he retired just felt like a natural fit for me, and while it isn’t an easy job, it’s incredibly gratifying to be serving the industry that I’ve been married to for nearly 40 years now. It all feels very serendipitous and fortuitous. CAC