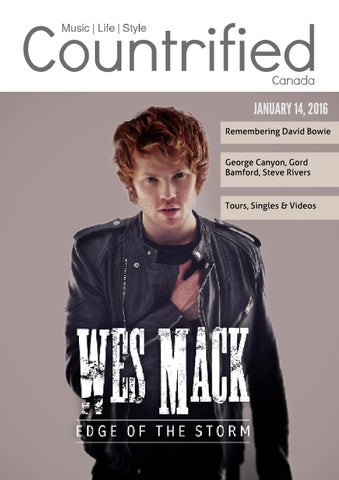 FROMTHEROAD WITHWESMACK We look back at one of the biggest tours of 2015. Billed as a farewell, Shania Twain&#39;s &quot;Rock this Country&quot; North American Tour included 2013 CCMA Discovery Award Winner, Wes Mack. Last year we caught up with Wes to get his take &quot;from the road&quot;.

day ?From the Road? with Wes Mack?

I?m not a morning person. I love sleep. No, I need sleep. But tour is not a place where one can have much of that so you take little naps where you can. Most time on tour is truly travel time: driving,

I feel ?average day on the road? perhaps flies in the face of life on tour. Often times the things that come up from day to day are unique, which perhaps is

flying, sitting in vehicles moving or otherwise. What makes this time bearable is the people you do it with. I love the guys in my band to the moon and back and have a hell of a good time just talking about nothing with them. Or talking about silly stuff that has

no place in any interview ever. The highlight of course though is actually getting to perform. It?s a funny thing? you spend 23 hours a day on tour, not playing so that you can spend one on stage connecting with people and creating music, and moments and memories. But it?s worth it. Being able to go out and meet the people across the country who allow me to do this thing is an insanely rewarding experience; more so than I ever expected. The interactions I?ve had with fans have truly amazed me on a number of occasions and driven me to push harder during times that are frustrating. So? we travel, we play, we eat? poorly at times (though I will say Shania Twain has the best catering I?ve ever tasted). I realize I may not have really answered the question properly, but I?ve been known to do that.

How do you select the singles that are included in your set list? Does your set list change from venue to venue?

In terms of choosing singles for my sets I feel you need to play the hits. That being said, one of my favorite parts of a live show is getting to show off some of my songs that have not been singles: often many of my favorite songs. But you gotta give your fans the pieces that brought them there; the songs they can scream along to and make memories with. I think its about creating the right balance and building an arc to your set that takes people on a bit of a journey, be that a 3 song showcase or a 15 song headlining spot. Watching people come out and sing back the songs is truly a thrilling feeling; seeing your words being thrown back at you. My set does indeed change from show to show, but within a given tour typically follows a similar backbone structure to give it its momentum.

Most memorable ?From the Road? experience? In London Ontario Shania and I finished &#39;Party For Two&#39;. I pulled out my in ear monitors

and heard the crowd roar at full volume for the first time on the tour (usually I just leave them in). I?d never heard anything like that in my life before. I was awestruck and will never forget the feeling.

Most outrageous ?From the Road? experience? Ah yes, the most outrageous road experience? . Tough to answer because often times these tend to be stories best left to the memories of those involved. Apparently I fell off a stage years ago though and was caught by a stage hand. Still kickin&#39;.

You recently toured with Shania Twain, how did touring with Canada?s biggest Country artist feel? Touring with Shania was a series of surreal moments. It was my first arena tour, it was a chance to see fans across the country in a state of pure elation, it was sharing the bill with nothing short of a living legend and singing onstage with her every night. The lead up to the

tour was a rollercoaster of emotions from excitement, to fear, to joy and everything in between. But, once we got a show or two into it, it was an amazing ride. My band and I had a blast playing the opening spot and were treated with watching her set every night. For myself, singing &#39;Party For Two&#39; with her at every show is likely the highlight of my career thus far. She is such a naturally talented performer, and has such a brilliant connection with her fans. Being able to share in that, and even contribute to the moment was fantastic. As I write this it is in fact the middle of the night and we are driving across Alberta to rejoin the Rock This Country tour with Shania Twain? perhaps the greatest compliment of all for us, in that we were invited back? so apparently we didn?t mess up anything too badly the first time around.

and half years to make. I began in 2012 as an independent artist: I had no label, no management, no agent etc. I decided to focus on songwriting above all else and put all performing on hold. I spent a year writing songs, and writing grant upon grant to pay for some of the recording costs. The three and half years that followed held a great many ups and downs (releasing indie singles, directing music videos, touring the country) that have led to my first major label album coming out at last. I say all of this because I?m keen to promote this record and see where it takes me for the next while. We have already begun booking shows into the new year, but I?m not racing to keep hammering out music immediately. I don?t write very often. I tend to do it in bursts when I feel I have something to say. I spent 3 and half years collecting what I wanted to say on Edge and I?m proud of what we made. There shall be more to come, and I doubt it will take another three and a half years (Lord, I hope not)? . But for now I think I?ll keep a little mystery

around what I plan to do next.

An exceptional role model and mentor ? highly praised for supporting Canadian artists, Canyon has confirmed that he w ill employ local support in each city on the tour, thus furthering his humble efforts tow ards promoting and nurturing local talent. Limited VIP packages are available at georgecanyon.com/shop for each market.

A Nova Scotia native, Canyon w as recently inducted into the Nova Scotia Country M usic Hall of Fame and has been w idely decorated w ith a number of accolades including multiple CCM A and ECM A Aw ards in addition to his multiple JUNO Aw ard w ins. As the national spokesperson for the Juvenile Diabetes Research Foundation and a vocal advocate and supporter of the Canadian M ilitary, Canyon w as also presented w ith the CCM A ?Humanitarian of the Year? Aw ard in recognition of his philanthropic endeavours w ith both organizations.

?I Got This? marks Canyon?s eleventh full-length release in a career that spans

Watch the lyric video for ?I Got This? here.

STEVERIVERS DEBUTSINGLE Nashville based, Canadian country singer/songw riter Steve Rivers, is kicking off 2016 on a high note w ith the release of his debut single ?Don?t Come Here Tonight? from his sophomore studio album, NO BOUNDARIES. Lyrically compelling, ?Don?t?Come Here Tonight? w ill resonate w ith anyone that?s encountered relationship challenges, breakups and a broken heart w hile enduring the process of moving on. &quot;I&#39; m very excited to finally release &quot;Don&#39; t Come Here Tonight&quot; to radio,? says Rivers, ?This is one of my favorite songs that I&#39; ve co-w ritten and it comes from a real honest place that I think many people w ill relate to.&quot; Listen NOW on Soundcloud

This is a no doubt add ?2016 will be starting off on the right track with for us!? the new single from Steve Cory Noel, 96.5 CKFM , Rivers, &#39;Don&#39;t Come Here Olds, AB Tonight.&#39; We all need a little down time, some time to ourselves, and this song certainly captures that mood! It builds nicely to the chorus and takes off from there. Great track from his solid &#39;No Boundaries&#39; album!&quot; Randy Owen, Country 107.3 Tillsonburg, ON

Rivers has opened for The Eli Young Band, Parmalee, Eric Paslay, Charlie Worsham, Frankie Ballard, Josh Thompson and Greg Allman to name a few . With new show s being added in the US for the 2016 Season, plans are currently underw ay for Rivers to return to Ontario in February for performances in Toronto, Guelph and London. ?Don?t Come Here Tonight? is available now .