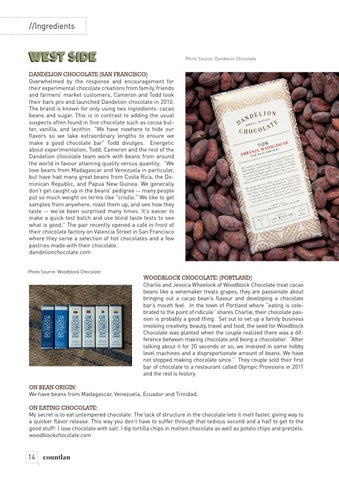 DANDELION CHOCOLATE {SAN FRANCISCO} Overwhelmed by the response and encouragement for their experimental chocolate creations from family, friends and farmers’ market customers, Cameron and Todd took their bars pro and launched Dandelion chocolate in 2010. The brand is known for only using two ingredients: cacao beans and sugar. This is in contrast to adding the usual suspects often found in fine chocolate such as cocoa butter, vanilla, and lecithin. “We have nowhere to hide our flavors so we take extraordinary  lengths to ensure we make a good chocolate bar” Todd divulges. Energetic about experimentation, Todd, Cameron and the rest of the Dandelion chocolate team work with beans from around the world in favour attaining quality versus quantity. “We love beans from Madagascar and Venezuela in particular, but have had many great beans from Costa Rica, the Dominican Republic, and Papua New Guinea. We generally don't get caught up in the beans' pedigree -- many people put so much weight on terms like "criollo." We like to get samples from anywhere, roast them up, and see how they taste -- we've been surprised many times. It's easier to make a quick test batch and use blind taste tests to see what is good.” The pair recently opened a café in front of their chocolate factory on Valencia Street in San Francisco where they serve a selection of hot chocolates and a few pastries made with their chocolate. dandelionchocolate.com Photo Source: Woodblock Chocolate

WOODBLOCK CHOCOLATE: {PORTLAND} Charlie and Jessica Wheelock of Woodblock Chocolate treat cacao beans like a winemaker treats grapes, they are passionate about bringing out a cacao bean’s flavour and developing a chocolate bar’s mouth feel. In the town of Portland where “eating is celebrated to the point of ridicule” shares Charlie, their chocolate passion is probably a good thing. Set out to set up a family business involving creativity, beauty, travel and food, the seed for Woodblock Chocolate was planted when the couple realized there was a difference between making chocolate and being a chocolatier. “After talking about it for 20 seconds or so, we invested in some hobby level machines and a disproportionate amount of beans. We have not stopped making chocolate since.” They couple sold their first bar of chocolate to a restaurant called Olympic Provisions in 2011 and the rest is history. ON BEAN ORIGIN: We have beans from Madagascar, Venezuela, Ecuador and Trinidad. ON EATING CHOCOLATE: My secret is to eat untempered chocolate. The lack of structure in the chocolate lets it melt faster, giving way to a quicker flavor release. This way you don’t have to suffer through that tedious second and a half to get to the good stuff! I love chocolate with salt. I dip tortilla chips in molten chocolate as well as potato chips and pretzels. woodblockchocolate.com 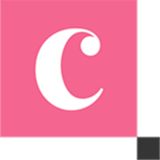 Countlan is a quarterly magazine dedicated to exploring how people all over the world entertain at home.

Countlan is a quarterly magazine dedicated to exploring how people all over the world entertain at home.