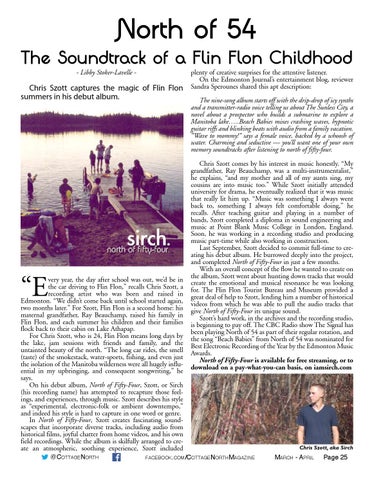 Chris Szott captures the magic of Flin Flon summers in his debut album.

very year, the day after school was out, we’d be in the car driving to Flin Flon,” recalls Chris Szott, a recording artist who was born and raised in Edmonton. “We didn’t come back until school started again, two months later.” For Szott, Flin Flon is a second home: his maternal grandfather, Ray Beauchamp, raised his family in Flin Flon, and each summer his children and their families flock back to their cabin on Lake Athapap. For Chris Szott, who is 24, Flin Flon means long days by the lake, jam sessions with friends and family, and the untainted beauty of the north. “The long car rides, the smell (taste) of the smokestack, water-sports, fishing, and even just the isolation of the Manitoba wilderness were all hugely influential in my upbringing, and consequent songwriting,” he says. On his debut album, North of Fifty-Four, Szott, or Sirch (his recording name) has attempted to recapture those feelings, and experiences, through music. Szott describes his style as “experimental, electronic-folk or ambient downtempo,” and indeed his style is hard to capture in one word or genre. In North of Fifty-Four, Szott creates fascinating soundscapes that incorporate diverse tracks, including audio from historical films, joyful chatter from home videos, and his own field recordings. While the album is skilfully arranged to create an atmospheric, soothing experience, Szott included @CottageNorth

plenty of creative surprises for the attentive listener. On the Edmonton Journal’s entertainment blog, reviewer Sandra Sperounes shared this apt description: The nine-song album starts off with the drip-drop of icy synths and a transmitter-radio voice telling us about The Sunless City, a novel about a prospector who builds a submarine to explore a Manitoba lake…..Beach Babies mixes crashing waves, hypnotic guitar riffs and blinking beats with audio from a family vacation. “Wave to mommy!” says a female voice, backed by a whoosh of water. Charming and seductive — you’ll want one of your own memory soundtracks after listening to north of fifty-four. Chris Szott comes by his interest in music honestly. “My grandfather, Ray Beauchamp, was a multi-instrumentalist,” he explains, “and my mother and all of my aunts sing, my cousins are into music too.” While Szott initially attended university for drama, he eventually realized that it was music that really lit him up. “Music was something I always went back to, something I always felt comfortable doing,” he recalls. After teaching guitar and playing in a number of bands, Szott completed a diploma in sound engineering and music at Point Blank Music College in London, England. Soon, he was working in a recording studio and producing music part-time while also working in construction. Last September, Szott decided to commit full-time to creating his debut album. He burrowed deeply into the project, and completed North of Fifty-Four in just a few months. With an overall concept of the flow he wanted to create on the album, Szott went about hunting down tracks that would create the emotional and musical resonance he was looking for. The Flin Flon Tourist Bureau and Museum provided a great deal of help to Szott, lending him a number of historical videos from which he was able to pull the audio tracks that give North of Fifty-Four its unique sound. Szott’s hard work, in the archives and the recording studio, is beginning to pay off. The CBC Radio show The Signal has been playing North of 54 as part of their regular rotation, and the song “Beach Babies” from North of 54 was nominated for Best Electronic Recording of the Year by the Edmonton Music Awards. North of Fifty-Four is available for free streaming, or to download on a pay-what-you-can basis, on iamsirch.com

Peek into the mining industry in northern Manitoba and Saskatchewan & uncover the past & future of hockey in the North. Meet a unique musician, learn about the colourful pine grosbeak & get some wise fitness tips from Canada's own Body Break. 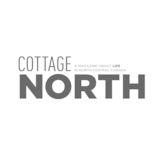