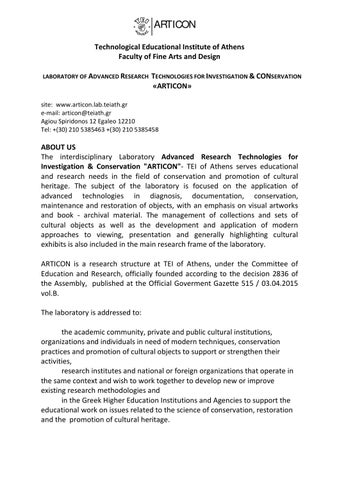 ABOUT US The interdisciplinary Laboratory Advanced Research Technologies for Investigation & Conservation "ARTICON"- TEI of Athens serves educational and research needs in the field of conservation and promotion of cultural heritage. The subject of the laboratory is focused on the application of advanced technologies in diagnosis, documentation, conservation, maintenance and restoration of objects, with an emphasis on visual artworks and book - archival material. The management of collections and sets of cultural objects as well as the development and application of modern approaches to viewing, presentation and generally highlighting cultural exhibits is also included in the main research frame of the laboratory. ARTICON is a research structure at TEI of Athens, under the Committee of Education and Research, officially founded according to the decision 2836 of the Assembly, published at the Official Goverment Gazette 515 / 03.04.2015 vol.B. The laboratory is addressed to: the academic community, private and public cultural institutions, organizations and individuals in need of modern techniques, conservation practices and promotion of cultural objects to support or strengthen their activities, research institutes and national or foreign organizations that operate in the same context and wish to work together to develop new or improve existing research methodologies and in the Greek Higher Education Institutions and Agencies to support the educational work on issues related to the science of conservation, restoration and the promotion of cultural heritage.

THE AIM the development, improvement and application of methodologies, techniques and scientific tools in the field of investigation, documentation, conservation and restoration. the support for the use of standard procedures and the provision of certified services the protection and the promotion of cultural heritage with emphasis on artworks and the book-archival material the production of modern research material to support education and learning objectives the strengthening of the cooperation of researchers and institutions working in similar fields

THE SCIENTIFIC FIELDS the implementation and the promotion of non-destructive tests (NDT) and non-invasive techniques. the application and promotion of modern digital capture technologies for documentation, restoration and reconstruction. the development of standards, experimental protocols and good practice guides. the study of the pathology, the assessment of conservation status, the conservation and the restoration of the objects the application of instrumental chemical analysis and cutting-edge technologies for the identification of materials and the construction techniques. the study of the historical-aesthetic status of cultural heritage objects and their interpretation through conservation. the development of methodologies for monitoring conservation procedures and evaluating their effectiveness. the dissemination of the results and the reinforcement of research and education links with the use of modern information and communication technologies.

ACTIVITIES The main activities of ARTICON include: Research in the fields of interest of the laboratory and Education for teaching and research needs in undergraduate and postgraduate level Even though the laboratory has only a few months of life, the founding members have a long experience in conducting research through national and European funded projects, technical studies, Ph.D. thesis supporting and dissertation projects. The following are the most representative ones: • 2015-2016: "Study of morphoplastic elements in the painting of Theophilos Hadjimichael supported by methodologies of non destructive testing." funded by ELKE TEI-A. • 2015-2016: "Programming actions for safely moving of book and archival material in the National Library of Greece, from the building on Panepistimiou Street to Faliron Delta". funded by ELKE TEI-A. • 2015: "Physicochemical study and documentation of the of the Winds Tower surfaces at the archaeological site of the Roman Agora of Athens for the conservation treatment and the archaeological promotion of the monument" funded by the Greek Ministry of Culture. • 2012-2014: “Oil Paintings on Paper Support: Documentation of the preservation state using multispectral imaging and chemical analysis. Determination of evaluation criteria – Conservation treatment proposals” . This research has been co-funded by the European Union (European Social Fund) and Greek national resources under the framework of the “Archimedes III: Funding of Research Groups in TEI of Athens” project of the “Education & Lifelong Learning” Operational Program. Total Budget: 83.000,00 €2009: “Multispectral study of oil sketches belonging to the National Gallery and Andreas Soutzos Museum” funded by the Costopoulos Foundation. • 2002–2008: “Upgrade of the education in the Dpt. of Conservation of Antiquities and Works of Art TEI of Athens through the introduction of new technologies and informatics” co-funded by the European Union (European Social Fund) and Greek national resources under the framework Operational Program "Education and Primary Vocational Training (ΕPΕΑΕΚ ΙI).

Actions of diffusion of knowledge and awareness of society about the importance of protection, rescue and promotion of cultural heritage. 2015-2016: Co-organization of the Conference «Diagnostic and conservation issues of paper material » in Athens with the Piraeus Bank Cultural Foundation - Historical Archive and in Thessaloniki with the ΠΟΛΙΤΙΣΤΙΚΟ ΙΔΡΥΜΑ Piraeus Bank Cultural ΟΜΙΛΟΥ ΠΕΙΡΑΙΩΣ Foundation - Historical Archive ARTICON and the General State Archives. The conferences made up the starting point of a collective effort to strengthen the scientific links of paper conservation laboratories under the development of an informal network. 2015: Conference: Organization of the Conference: «Oil paintings on paper support: documentation of the preservation state using multispectral imaging and chemical analysis. Determination of evaluation criteria - conservation treatment proposals» in collaboration with National Gallery and Alexandros Soutzos Museum.

Partnerships with academic institutions and research centers in Greece or abroad and with public and private entities.

Publications/Conferences peer reviewed full paper of the ARTICON Scientific Team. (Selection) Α.Alexopoulou, A.-A.Kaminari, A.Kandri and D.Balafa, 2016, «The study of two Marble Pyxides from the Archaeological Museum of Ancient Corinth using hyperspectral imaging» accepted at the 41rst International Symposium on Archeometry (ISA), Kalamata 25-29May 2016. Kanapitsas A. , Batrinou A. , Aravantinos, A., Markaki P., C. Sflomos, “Effect of γ - radiation on the production of Ochratoxin A by Aspergillus carbonarius in raisins (Vitis vinifera L.) ”, Radiation Physics and Chemistry (to be published). A. Maltezos, C. Potiriades, A. Aravantinos. “Environmental radioactivity monitoring in Greece”. iaea.org / NCL Collection Store / Public / 20/ 045/ P.Banou, A.Alexopoulou & B.W.Singer, 2015 – “The treatment of oil paintings on paper supports—Considerations on the treatment applications used from the past until the present”, Journal of Paper Conservation, IADA, Vol.16, No.1, pp.29-36. P.Banou, A.Alexopoulou, C.Chranioti, D.Tsimogiannis, A.V.Terlixi, S.Zervos, B.W.Singer, 2015, “Investigating the effect of oil binders in paints and inks on paper supports via VOC emission analysis” in Journal of Cultural Heritage (accepted). A.Kaminari and A.Alexopoulou, “Heinrich Schliemann’s Copybooks in the Gennadius Library. A non-destructive imaging documentation for assessing the condition of the archive”, XIII IADA Congress, International Association of Book and Paper Conservators, 12-16 October 2015, Berlin, Germany. A.Kaminari, I.Sianoudis, A.Alexopoulou, “Iron Gall Inks on papers and copies: The possibility of achieving differentiation based on the use of Fibre Optics Reflectance Spectroscopy (FORS)”, 8th National Conference on NDT of HSNT, 8-9 May 2015, Athens, Greece A.Kaminari, P.Banou, A.Alexopoulou, 2015, “The application of FORS and Colourimetry for the evaluation of the optical change of the artist paper supports used for printing and oil painting techniques”, 8th National NDT Conference: The Contribution of Non-Destructive Testing for the Safety of

Small and Large Works and Constructions, Desrtuctive Testing , Athens, 8-9 May 2015.

The Hellenic Society of Non-

A.Kaminari, A.Moutsatsou, P.Banou and A.Alexopoulou, 2014 “The contribution of imaging techniques to nondestructive testing of oil paintings on paper supports” Proceedings of Art ’14 11th international Conference on Non Destructive testing and Microanalyis for the diagnostics and Conservation of Cultural and Environmental Heritage, 11-13 June, Madrid, 2014. P.Banou, A.Alexopoulou, B.W.Singer, 2014, "Investigating the effect of oil medium on the paper supports of works of arts (artwork on paper support). A discussion over factors, mechanisms and effects involved", in the post printings of the conference Men and Books: From Microorganisms to Mega-organisms, organized by European Research Centre for Book and Paper ConservationRestoration in Horn, Austria, 23rd - 25th April 2014 (in press). P.Banou, A.Alexopoulou & B.W.Singer – “The treatment of oil paintings on paper supports—Considerations on the treatment applications used from the past until the present,” IADA 'IF ONLY I HAD KNOWN – LOOKING BACK, MOVING FORWARD', Amsterdam, May 14th – 16th, 2014.

Preparation, submission and implementation of national and international research projects and plans as well as advisory or development projects and technical studies aimed at meeting the needs of the scientific community and the society. 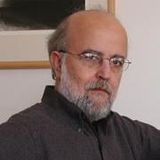