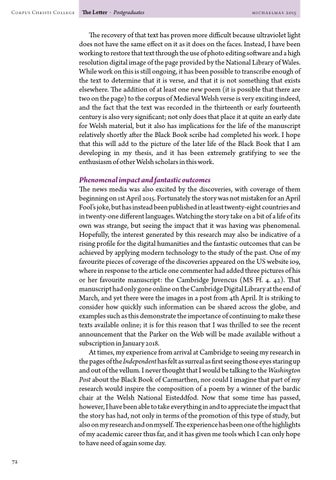 The recovery of that text has proven more difficult because ultraviolet light does not have the same effect on it as it does on the faces. Instead, I have been working to restore that text through the use of photo editing software and a high resolution digital image of the page provided by the National Library of Wales. While work on this is still ongoing, it has been possible to transcribe enough of the text to determine that it is verse, and that it is not something that exists elsewhere. The addition of at least one new poem (it is possible that there are two on the page) to the corpus of Medieval Welsh verse is very exciting indeed, and the fact that the text was recorded in the thirteenth or early fourteenth century is also very significant; not only does that place it at quite an early date for Welsh material, but it also has implications for the life of the manuscript relatively shortly after the Black Book scribe had completed his work. I hope that this will add to the picture of the later life of the Black Book that I am developing in my thesis, and it has been extremely gratifying to see the enthusiasm of other Welsh scholars in this work.

Phenomenal impact and fantastic outcomes The news media was also excited by the discoveries, with coverage of them beginning on 1st April 2015. Fortunately the story was not mistaken for an April Foolâ&#x20AC;&#x2122;s joke, but has instead been published in at least twenty-eight countries and in twenty-one different languages. Watching the story take on a bit of a life of its own was strange, but seeing the impact that it was having was phenomenal. Hopefully, the interest generated by this research may also be indicative of a rising profile for the digital humanities and the fantastic outcomes that can be achieved by applying modern technology to the study of the past. One of my favourite pieces of coverage of the discoveries appeared on the US website io9, where in response to the article one commenter had added three pictures of his or her favourite manuscript: the Cambridge Juvencus (MS Ff. 4. 42). That manuscript had only gone online on the Cambridge Digital Library at the end of March, and yet there were the images in a post from 4th April. It is striking to consider how quickly such information can be shared across the globe, and examples such as this demonstrate the importance of continuing to make these texts available online; it is for this reason that I was thrilled to see the recent announcement that the Parker on the Web will be made available without a subscription in January 2018. At times, my experience from arrival at Cambridge to seeing my research in the pages of the Independent has felt as surreal as first seeing those eyes staring up and out of the vellum. I never thought that I would be talking to the Washington Post about the Black Book of Carmarthen, nor could I imagine that part of my research would inspire the composition of a poem by a winner of the bardic chair at the Welsh National Eisteddfod. Now that some time has passed, however, I have been able to take everything in and to appreciate the impact that the story has had, not only in terms of the promotion of this type of study, but also on my research and on myself. The experience has been one of the highlights of my academic career thus far, and it has given me tools which I can only hope to have need of again some day. 72