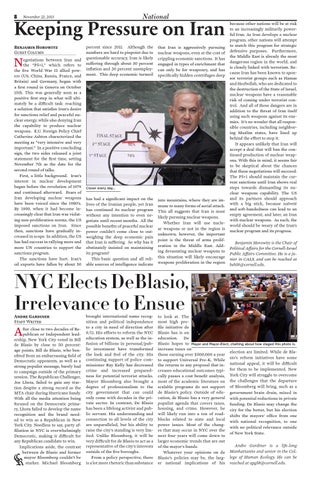 egotiations between Iran and the “P5+1,” which refers to the five World War II allied powers (US, China, Russia, France, and Britain) and Germany, began with a first round in Geneva on October 15th. This was generally seen as a positive first step in what will ultimately be a difficult task: reaching a solution that satisfies Iran’s desire for sanctions relief and peaceful nuclear energy, while also denying Iran the capability to produce nuclear weapons. E.U. Foreign Policy Chief Catherine Ashton characterized the meeting as “very intensive and very important.” In a positive concluding sign, the two sides released a joint statement for the first time, setting November 7th as the date for the second round of talks. First, a little background. Iran’s interest in nuclear development began before the revolution of 1979 and continued afterward. Fears of Iran developing nuclear weapons have been voiced since the 1980’s. By 1990, when it had become increasingly clear that Iran was violating non-proliferation norms, the US imposed sanctions on Iran. Since then, sanctions have gradually increased in scope. In addition, the US has had success in rallying more and more UN countries to support the sanctions program. The sanctions have hurt. Iran’s oil exports have fallen by about 50

percent since 2011. Although the numbers are hard to pinpoint due to questionable accuracy, Iran is likely suffering through about 30 percent inflation and 20 percent unemployment. This deep economic turmoil

that Iran is aggressively pursuing nuclear weapons, even at the cost of crippling economic sanctions. It has engaged in types of enrichment that can only be for weaponry, and has specifically hidden centrifuges deep

has had a significant impact on the lives of the Iranian people, yet Iran has continued its nuclear program without any intention to even negotiate until recent months. All the possible benefits of peaceful nuclear power couldn’t come close to outweighing the deep economic pain that Iran is suffering. So why has it obstinately insisted on maintaining its program? This basic question and all reliable sources of intelligence indicate

fter close to two decades of Republican or Independent leadership, New York City voted in Bill de Blasio by close to 50 percentage points. Bill de Blasio, who benefited from an embarrassing field of Democratic opponents, as well as a strong populist message, barely had to campaign outside of the primary session. The Republican Challenger, Joe Lhota, failed to gain any traction despite a strong record as the MTA chair during Hurricane Sandy. With all the media attention being focused on the Democratic primary, Lhota failed to develop the name recognition and the brand needed to win as a Republican in New York City. Needless to say, party affiliation in NYC is overwhelmingly Democratic, making it difficult for any Republican candidate to win. Implications aside, the contrast between de Blasio and former mayor Bloomberg couldn’t be starker. Michael Bloomberg

brought international name recognition and political independence to a city in need of direction after 9/11. His efforts to reform the NYC education system, as well as the infusion of billions in personal/public investment have transformed the look and feel of the city. His continuing support of police commissioner Ray Kelly has decreased crime and increased preparedness for potential terrorist attacks. Mayor Bloomberg also brought a degree of professionalism to the city government that can could only come with decades in the private sector. In contrast, De Blasio has been a lifelong activist and public servant. His understanding and connection to all levels of the city are unparalleled, but his ability to raise the city’s standing is very limited. Unlike Bloomberg, it will be very difficult for de Blasio to act as a representative of the city’s interests outside of the five boroughs. From a policy perspective, there is a lot more rhetoric than substance

because other nations will be at risk to an increasingly militarily powerful Iran. As Iran develops a nuclear program, other nations will attempt to match this program for strategic defensive purposes. Furthermore, the Middle East is already the most dangerous region in the world, and is closely linked with terrorism. Because Iran has been known to sponsor terrorist groups such as Hamas and Hezbollah, who are dedicated to the destruction of the State of Israel, nuclear weapons have a reasonable risk of coming under terrorist control. And all of these dangers are in addition to the threat of Iran itself using such weapons against its enemies. It’s no wonder that all responsible countries, including neighboring Muslim states, have lined up behind the effort to stop it. It appears unlikely that Iran will accept a deal that will ban the continued production of nuclear weapons. With this in mind, it seems fair to be skeptical about the chances that these negotiations will succeed. The P5+1 should maintain the current sanctions until Iran shows real steps towards dismantling its nuclear weapons capability. The US and its partners should approach with a big stick, because naïveté and soft-handedness can lead to an empty agreement, and later, an Iran with nuclear weapons. As such, the world should be weary of the Iran’s nuclear program and its progress. Benjamin Horowitz is the Chair of Political Affairs for the Cornell-Israel Public Affairs Committee. He is a junior in CALS, and can be reached at bsh56@cornell.edu.

to look at. The most high profile initiative de Blasio has is on education. De Blasio hopes to Mayor and Mayor-Elect, chatting about how staged this photo is. increase taxes on election are limited. While de Blathose earning over $500,000 a year sio’s reform initiatives have some to support Universal Pre-K. While the returns to any proposal that in- national appeal, it will be difficult creases educational outcomes typi- for them to be implemented. New cally passes a cost benefit analysis, York City will struggle to overcome most of the academic literature on the challenges that the departure scalable programs do not support of Bloomberg will bring, such as a de Blasio’s policy. Outside of edu- government brain drain, mixed in cation, de Blasio has a very general with potential reductions in private populist agenda that covers taxes, funding. De Blasio may change the housing, and crime. However, he city for the better, but his election will likely run into a ton of road- shifts the mayors’ office from one blocks related to state and local with national recognition, to one power issues. Most of the changwith no political relevance outside es that may occur in NYC over the of New York State. next four years will come down to larger economic trends that are out Andre Gardiner is a life-long of the mayor’s hands. Manhattanite and senior in the ColWhatever your opinions on de Blasio’s policies may be, the larg- lege of Human Ecology. He can be er national implications of his reached at apg58@cornell.edu.