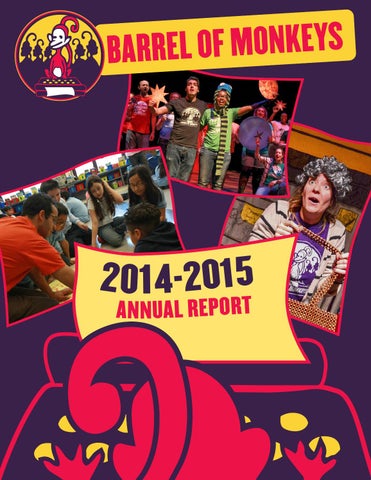 I’m Barrel of Monkeys’ new Executive Director, and I hate to brag, but I have the best job in the entire world.

Every day I get to work with talented individuals who are passionate about their work, and every day I get to see with my own eyes the difference we are making in the lives of children. If you haven’t already noticed, Barrel of Monkeys is no ordinary nonprofit. We don’t fit neatly into any one category, like “theater company” or “literacy program.” We span multiple genres, and emphasize building confidence, spreading kindness, and engendering a love of creative expression in the classroom and on stage. Some days we help students share their heartfelt true stories with their peers; other days we adapt goofy tales of Volcano Houses and Horsewolves into songs. That’s just how we roll. We believe kids learn and retain knowledge most effectively when their ideas are supported, celebrated and shared. We build collaboration and social-emotional learning into every lesson plan, alongside the fun and games. We deal in ideas; our currency is imagination. And yet, as a growing nonprofit in our 19th year, we can’t rely on that currency alone. Your support is essential to our continued success, even as we strive to save the world on a shoestring. By supporting Barrel of Monkeys, you ensure that the next generation has the opportunity to embrace their silly sides, and to learn to love their ideas as much as we do. Thank you for joining us. Monkey on! Corinne Neal Executive Director

Thanks to your support, Barrel of Monkeys is able to teach creative writing residencies to students across Chicago Public Schools. These 3rd graders at Federico Garcia Lorca Elementary are excited to share the stories that they wrote together.

Elsewhere on the Internets www.barrelofmonkeys.org

KIDS WRITE IT. WE DO IT. WORLD SAVED. OUR MISSION

Barrel of Monkeys (BOM) is an ensemble of actor/educators who create an alternative learning environment in which children share their personal voices and celebrate the power of thier imaginations. BOM accomplishes this through creative writing workshops and in-school performances of children’s stories. BOM also engages the broader community in support of the visions of children through public performances of their work.

RESIDENCIES During our creative writing workshops, students write over 6,000 original stories each year.

A selection of stories is adapted and performed for the students in school-wide assemblies.

The stories become the repertoire for That’s Weird, Grandma.. Audiences vote for their favorites.

One story from each school is performed for students, teachers, parents and the public.

Throughout each school year, Barrel of Monkeys conducts 6-week creative writing residencies in CPS classrooms for 3rd-5th graders. BOM brings 4-5 teaching artists into the classroom, creating an engaging and extremely personalized learning environment. The multi-week residency uses theater techniques to build students’ writing skills and enthusiasm for self-expression and collaboration. Each child writes a minimum of 6-8 individual stories in a residency. When the residency has finished, BOM’s professional actors and musicians transform the stories into a fast-paced sketch show for the stage. The actors then return to the school and perform these works for the student authors themselves and their entire school community.

of in-classroom creative writing instruction each year of students demonstrate improved writing skills at the end of their 6-week residency.

As part of our belief in sharing ideas, Barrel of Monkeys frequently takes our work beyond the classroom - teaching our model to others in a variety of environments. We lead workshops on topics including integrating arts into a curriculum, effective classroom management and building social-emotional learning.

At Loyola Park, we offer a free after-school program to students ages 7-13, packed with activities designed to enhance creative writing skills and foster collaboration. Participants have the opportunity to write in a variety of styles and genres, have their stories performed by BOM’s company of professional actors and musicians and create original theater works of their own, performed for their family and friends.

PERFORMANCE After Barrel of Monkeys performs an original show for each school, student work is reproduced at our yearly Celebration of Authors, an event that showcases stories from every school we worked in throughout the year. The adapted stories then join a repertoire of thousands of songs, sketches and movement pieces, serving as a living history of the work of Chicago elementary school students.

There is a great flood of grape soda in the worst hot dog factory in the world. There was a big fat very large monster with 1 eye in the kitchen closet. His name is Brandon. To solve the problem he drunk the grape soda and gave me a nice can of grape soda. He said “Here is a soda can for you to help me”. I said “You’re welcome, here is a soda for you”. So we both ate hot dogs and drank soda. THE END

GRANDMA That’s Weird, Grandma is a variety show of short sketches and songs adapted from stories written by students in Barrel of Monkeys’ arts education programs. The weekly show, now in its 15th year, runs the gamut from clever and funny to touching and poignant, and includes live music, original song-and-dance numbers, wigs and props galore, and a rotating cast of talented professional actors who celebrate the imaginations of children through this raucous performance.

“Audience members can expect to spend most of the show uncontrollably laughing giggling, snorting, and perhaps farting from the abundance of laughing giggling, and snorting. All costume pieces, albeit simple, are enjoyably over-the-top, colorful, and add to the ‘classroom feel’ of this production.”

versus the national average age of Broadway threater-goers, which in 2014-2015 was 44. Source: https://www/broadwayleague.com/index.php?url_identifier=thedemographics-of-the-broadway-audience

“THAT’S WEIRD, GRANDMA is for everyone. Everything about Barrel of Monkeys is amazing, their talent for teaching and acting, their mission and vision, their impact, and how they put a smile on everyone’s face.” -Eden Diez, Buzz Chicago

“The most important thing I learned was writing. I did not like writing until Barrel of Monkeys showed up.” 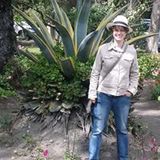