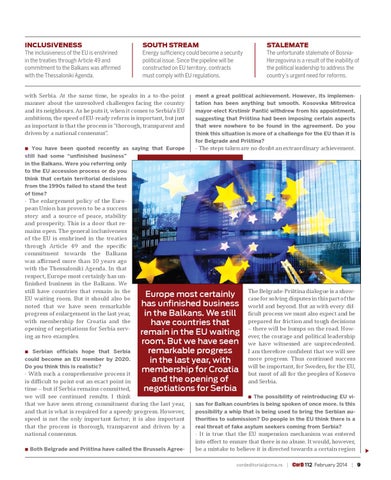 The inclusiveness of the EU is enshrined in the treaties through Article 49 and commitment to the Balkans was affirmed with the Thessaloniki Agenda.

Energy sufficiency could become a security political issue. Since the pipeline will be constructed on EU territory, contracts must comply with EU regulations.

The unfortunate stalemate of BosniaHerzegovina is a result of the inability of the political leadership to address the country’s urgent need for reforms.

with Serbia. At the same time, he speaks in a to-the-point manner about the unresolved challenges facing the country and its neighbours. As he puts it, when it comes to Serbia’s EU ambitions, the speed of EU-ready reform is important, but just as important is that the process is “thorough, transparent and driven by a national consensus”. ■ You have been quoted recently as saying that Europe still had some “unfinished business” in the Balkans. Were you referring only to the EU accession process or do you think that certain territorial decisions from the 1990s failed to stand the test of time?

- The enlargement policy of the European Union has proven to be a success story and a source of peace, stability and prosperity. This is a door that remains open. The general inclusiveness of the EU is enshrined in the treaties through Article 49 and the specific commitment towards the Balkans was affirmed more than 10 years ago with the Thessaloniki Agenda. In that respect, Europe most certainly has unfinished business in the Balkans. We still have countries that remain in the EU waiting room. But it should also be noted that we have seen remarkable progress of enlargement in the last year, with membership for Croatia and the opening of negotiations for Serbia serving as two examples. ■ Serbian officials hope that Serbia

could become an EU member by 2020. Do you think this is realistic?

ment a great political achievement. However, its implementation has been anything but smooth. Kosovska Mitrovica mayor-elect Krstimir Pantić withdrew from his appointment, suggesting that Priština had been imposing certain aspects that were nowhere to be found in the agreement. Do you think this situation is more of a challenge for the EU than it is for Belgrade and Priština?

- The steps taken are no doubt an extraordinary achievement.

Europe most certainly has unfinished business in the Balkans. We still have countries that remain in the EU waiting room. But we have seen remarkable progress in the last year, with membership for Croatia and the opening of negotiations for Serbia

- With such a comprehensive process it is difficult to point out an exact point in time – but if Serbia remains committed, we will see continued results. I think that we have seen strong commitment during the last year, and that is what is required for a speedy progress. However, speed is not the only important factor; it is also important that the process is thorough, transparent and driven by a national consensus. ■ Both Belgrade and Priština have called the Brussels Agree-

The Belgrade-Priština dialogue is a showcase for solving disputes in this part of the world and beyond. But as with every difficult process we must also expect and be prepared for friction and tough decisions – there will be bumps on the road. However, the courage and political leadership we have witnessed are unprecedented. I am therefore confident that we will see more progress. Thus continued success will be important, for Sweden, for the EU, but most of all for the peoples of Kosovo and Serbia.

■ The possibility of reintroducing EU visas for Balkan countries is being spoken of once more. Is this possibility a whip that is being used to bring the Serbian authorities to submission? Do people in the EU think there is a real threat of fake asylum seekers coming from Serbia? - It is true that the EU suspension mechanism was entered into effect to ensure that there is no abuse. It would, however, be a mistake to believe it is directed towards a certain region cordeditorial@cma.rs | 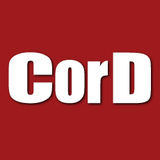