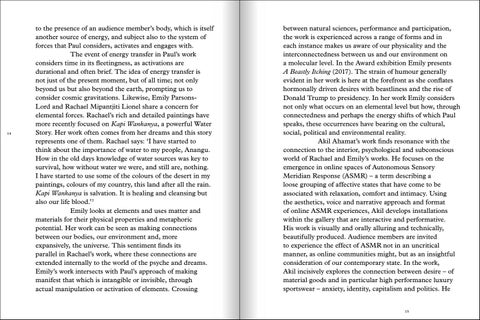 to the presence of an audience member’s body, which is itself another source of energy, and subject also to the system of forces that Paul considers, activates and engages with. The event of energy transfer in Paul’s work considers time in its fleetingness, as activations are durational and often brief. The idea of energy transfer is not just of the present moment, but of all time; not only beyond us but also beyond the earth, prompting us to consider cosmic gravitations. Likewise, Emily ParsonsLord and Rachael Mipantjiti Lionel share a concern for elemental forces. Rachael’s rich and detailed paintings have more recently focused on Kapi Wankanya, a powerful Water Story. Her work often comes from her dreams and this story represents one of them. Rachael says: ‘I have started to think about the importance of water to my people, Anangu. How in the old days knowledge of water sources was key to survival, how without water we were, and still are, nothing. I have started to use some of the colours of the desert in my paintings, colours of my country, this land after all the rain. Kapi Wankanya is salvation. It is healing and cleansing but also our life blood.’7 Emily looks at elements and uses matter and materials for their physical properties and metaphoric potential. Her work can be seen as making connections between our bodies, our environment and, more expansively, the universe. This sentiment finds its parallel in Rachael’s work, where these connections are extended internally to the world of the psyche and dreams. Emily’s work intersects with Paul’s approach of making manifest that which is intangible or invisible, through actual manipulation or activation of elements. Crossing

between natural sciences, performance and participation, the work is experienced across a range of forms and in each instance makes us aware of our physicality and the interconnectedness between us and our environment on a molecular level. In the Award exhibition Emily presents A Beastly Itching (2017). The strain of humour generally evident in her work is here at the forefront as she conflates hormonally driven desires with beastliness and the rise of Donald Trump to presidency. In her work Emily considers not only what occurs on an elemental level but how, through connectedness and perhaps the energy shifts of which Paul speaks, these occurrences have bearing on the cultural, social, political and environmental reality. Akil Ahamat’s work finds resonance with the connection to the interior, psychological and subconscious world of Rachael and Emily’s works. He focuses on the emergence in online spaces of Autonomous Sensory Meridian Response (ASMR) – a term describing a loose grouping of affective states that have come to be associated with relaxation, comfort and intimacy. Using the aesthetics, voice and narrative approach and format of online ASMR experiences, Akil develops installations within the gallery that are interactive and performative. His work is visually and orally alluring and technically, beautifully produced. Audience members are invited to experience the effect of ASMR not in an uncritical manner, as online communities might, but as an insightful consideration of our contemporary state. In the work, Akil incisively explores the connection between desire – of material goods and in particular high performance luxury sportswear – anxiety, identity, capitalism and politics. He 15