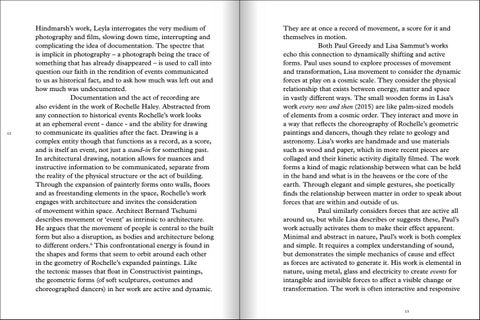 Hindmarsh’s work, Leyla interrogates the very medium of photography and film, slowing down time, interrupting and complicating the idea of documentation. The spectre that is implicit in photography – a photograph being the trace of something that has already disappeared – is used to call into question our faith in the rendition of events communicated to us as historical fact, and to ask how much was left out and how much was undocumented. Documentation and the act of recording are also evident in the work of Rochelle Haley. Abstracted from any connection to historical events Rochelle’s work looks at an ephemeral event - dance - and the ability for drawing to communicate its qualities after the fact. Drawing is a complex entity though that functions as a record, as a score, and is itself an event, not just a stand-in for something past. In architectural drawing, notation allows for nuances and instructive information to be communicated, separate from the reality of the physical structure or the act of building. Through the expansion of painterly forms onto walls, floors and as freestanding elements in the space, Rochelle’s work engages with architecture and invites the consideration of movement within space. Architect Bernard Tschumi describes movement or ‘event’ as intrinsic to architecture. He argues that the movement of people is central to the built form but also a disruption, as bodies and architecture belong to different orders.6 This confrontational energy is found in the shapes and forms that seem to orbit around each other in the geometry of Rochelle’s expanded paintings. Like the tectonic masses that float in Constructivist paintings, the geometric forms (of soft sculptures, costumes and choreographed dancers) in her work are active and dynamic.

They are at once a record of movement, a score for it and themselves in motion. Both Paul Greedy and Lisa Sammut’s works echo this connection to dynamically shifting and active forms. Paul uses sound to explore processes of movement and transformation, Lisa movement to consider the dynamic forces at play on a cosmic scale. They consider the physical relationship that exists between energy, matter and space in vastly different ways. The small wooden forms in Lisa’s work every now and then (2015) are like palm-sized models of elements from a cosmic order. They interact and move in a way that reflects the choreography of Rochelle’s geometric paintings and dancers, though they relate to geology and astronomy. Lisa’s works are handmade and use materials such as wood and paper, which in more recent pieces are collaged and their kinetic activity digitally filmed. The work forms a kind of magic relationship between what can be held in the hand and what is in the heavens or the core of the earth. Through elegant and simple gestures, she poetically finds the relationship between matter in order to speak about forces that are within and outside of us. Paul similarly considers forces that are active all around us, but while Lisa describes or suggests these, Paul’s work actually activates them to make their effect apparent. Minimal and abstract in nature, Paul’s work is both complex and simple. It requires a complex understanding of sound, but demonstrates the simple mechanics of cause and effect as forces are activated to generate it. His work is elemental in nature, using metal, glass and electricity to create events for intangible and invisible forces to affect a visible change or transformation. The work is often interactive and responsive 13