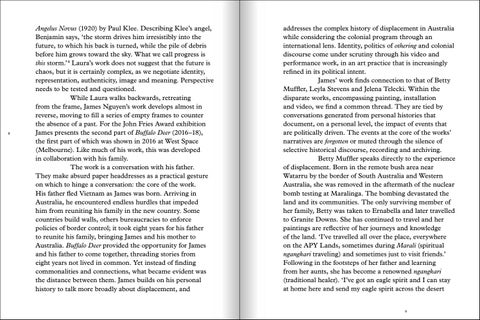 Angelus Novus (1920) by Paul Klee. Describing Klee’s angel, Benjamin says, ‘the storm drives him irresistibly into the future, to which his back is turned, while the pile of debris before him grows toward the sky. What we call progress is this storm.’ 4 Laura’s work does not suggest that the future is chaos, but it is certainly complex, as we negotiate identity, representation, authenticity, image and meaning. Perspective needs to be tested and questioned. While Laura walks backwards, retreating from the frame, James Nguyen’s work develops almost in reverse, moving to fill a series of empty frames to counter the absence of a past. For the John Fries Award exhibition James presents the second part of Buffalo Deer (2016–18), the first part of which was shown in 2016 at West Space (Melbourne). Like much of his work, this was developed in collaboration with his family. The work is a conversation with his father. They make absurd paper headdresses as a practical gesture on which to hinge a conversation: the core of the work. His father fled Vietnam as James was born. Arriving in Australia, he encountered endless hurdles that impeded him from reuniting his family in the new country. Some countries build walls, others bureaucracies to enforce policies of border control; it took eight years for his father to reunite his family, bringing James and his mother to Australia. Buffalo Deer provided the opportunity for James and his father to come together, threading stories from eight years not lived in common. Yet instead of finding commonalities and connections, what became evident was the distance between them. James builds on his personal history to talk more broadly about displacement, and

addresses the complex history of displacement in Australia while considering the colonial program through an international lens. Identity, politics of othering and colonial discourse come under scrutiny through his video and performance work, in an art practice that is increasingly refined in its political intent. James’ work finds connection to that of Betty Muffler, Leyla Stevens and Jelena Telecki. Within the disparate works, encompassing painting, installation and video, we find a common thread. They are tied by conversations generated from personal histories that document, on a personal level, the impact of events that are politically driven. The events at the core of the works’ narratives are forgotten or muted through the silence of selective historical discourse, recording and archiving. Betty Muffler speaks directly to the experience of displacement. Born in the remote bush area near Watarru by the border of South Australia and Western Australia, she was removed in the aftermath of the nuclear bomb testing at Maralinga. The bombing devastated the land and its communities. The only surviving member of her family, Betty was taken to Ernabella and later travelled to Granite Downs. She has continued to travel and her paintings are reflective of her journeys and knowledge of the land. ‘I’ve travelled all over the place, everywhere on the APY Lands, sometimes during Marali (spiritual ngangkari traveling) and sometimes just to visit friends.’ Following in the footsteps of her father and learning from her aunts, she has become a renowned ngangkari (traditional healer). ‘I’ve got an eagle spirit and I can stay at home here and send my eagle spirit across the desert 9