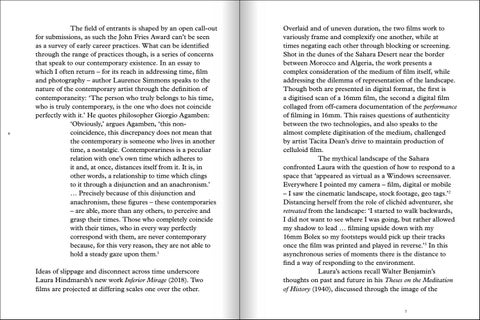 The field of entrants is shaped by an open call-out for submissions, as such the John Fries Award can’t be seen as a survey of early career practices. What can be identified through the range of practices though, is a series of concerns that speak to our contemporary existence. In an essay to which I often return – for its reach in addressing time, film and photography – author Laurence Simmons speaks to the nature of the contemporary artist through the definition of contemporaneity: ‘The person who truly belongs to his time, who is truly contemporary, is the one who does not coincide perfectly with it.’ He quotes philosopher Giorgio Agamben: ‘Obviously,’ argues Agamben, ‘this noncoincidence, this discrepancy does not mean that the contemporary is someone who lives in another time, a nostalgic. Contemporariness is a peculiar relation with one’s own time which adheres to it and, at once, distances itself from it. It is, in other words, a relationship to time which clings to it through a disjunction and an anachronism.’ … Precisely because of this disjunction and anachronism, these figures – these contemporaries – are able, more than any others, to perceive and grasp their times. Those who completely coincide with their times, who in every way perfectly correspond with them, are never contemporary because, for this very reason, they are not able to hold a steady gaze upon them.1 Ideas of slippage and disconnect across time underscore Laura Hindmarsh’s new work Inferior Mirage (2018). Two films are projected at differing scales one over the other.

Overlaid and of uneven duration, the two films work to variously frame and complexify one another, while at times negating each other through blocking or screening. Shot in the dunes of the Sahara Desert near the border between Morocco and Algeria, the work presents a complex consideration of the medium of film itself, while addressing the dilemma of representation of the landscape. Though both are presented in digital format, the first is a digitised scan of a 16mm film, the second a digital film collaged from off-camera documentation of the performance of filming in 16mm. This raises questions of authenticity between the two technologies, and also speaks to the almost complete digitisation of the medium, challenged by artist Tacita Dean’s drive to maintain production of celluloid film. The mythical landscape of the Sahara confronted Laura with the question of how to respond to a space that ‘appeared as virtual as a Windows screensaver. Everywhere I pointed my camera – film, digital or mobile – I saw the cinematic landscape, stock footage, geo tags.’2 Distancing herself from the role of clichéd adventurer, she retreated from the landscape: ‘I started to walk backwards, I did not want to see where I was going, but rather allowed my shadow to lead … filming upside down with my 16mm Bolex so my footsteps would pick up their tracks once the film was printed and played in reverse.’3 In this asynchronous series of moments there is the distance to find a way of responding to the environment. Laura’s actions recall Walter Benjamin’s thoughts on past and future in his Theses on the Meditation of History (1940), discussed through the image of the 7