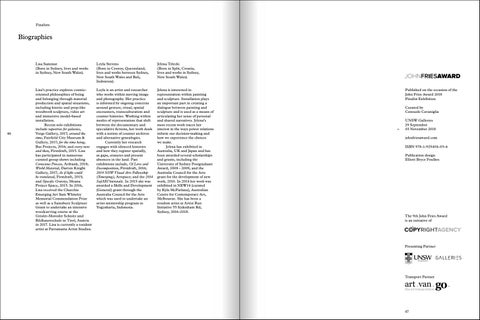 Lisa’s practice explores cosmicoriented philosophies of being and belonging through material production and spatial situations, including kinetic and prop-like woodwork sculpture, video art and immersive model-based installation. Recent solo exhibitions include tapestries for galaxies, Verge Gallery, 2017; around the time, Fairfield City Museum & Gallery, 2017; for the time being, Bus Projects, 2016; and every now and then, Firstdraft, 2015. Lisa has participated in numerous curated group shows including Conscious Process, Artbank, 2018; World Material, Darren Knight Gallery, 2017; As if light could be translated, Firstdraft, 2015; and Specific Gravity, Moana Project Space, 2015. In 2016, Lisa received the Churchie Emerging Art Sam Whiteley Memorial Commendation Prize as well as a Sainsbury Sculpture Grant to undertake an intensive woodcarving course at the Geisler-Moroder Schnitz und Bildhauerschule in Tirol, Austria in 2017. Lisa is currently a resident artist at Parramatta Artist Studios.

Leyla is an artist and researcher who works within moving image and photography. Her practice is informed by ongoing concerns around gesture, ritual, spatial encounters, transculturation and counter histories. Working within modes of representation that shift between the documentary and speculative fictions, her work deals with a notion of counter archives and alternative genealogies. Currently her research engages with silenced histories and how they register spatially, as gaps, erasures and present absences in the land. Past exhibitions include, Of Love and Decomposition, Firstdraft, 2016; 2014 NSW Visual Arts Fellowship (Emerging), Artspace; and the 2014 SafARI biennale. In 2015 she was awarded a Skills and Development (General) grant through the Australia Council for the Arts which was used to undertake an artist mentorship program in Yogyakarta, Indonesia.

Jelena is interested in representation within painting and sculpture. Installation plays an important part in creating a dialogue between painting and sculpture and is used as a means of articulating her sense of personal and shared narratives. Jelena’s most recent work traces her interest in the ways power relations inform our decision-making and how we experience the choices we make. Jelena has exhibited in Australia, UK and Japan and has been awarded several scholarships and grants, including the University of Sydney Postgraduate Award, 2008 - 2009, and the Australia Council for the Arts grant for the development of new work, 2010. In 2014 her work was exhibited in NEW14 (curated by Kyla McFarlane), Australian Centre for Contemporary Art, Melbourne. She has been a resident artist at Artist Run Initiative 55 Sydenham Rd, Sydney, 2016-2018.

The 9th John Fries Award is an initiative of