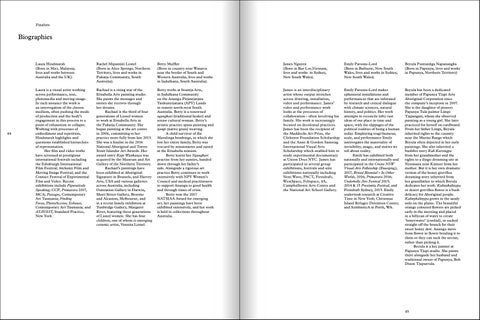 Laura Hindmarsh (Born in Miri, Malaysia, lives and works between Australia and the UK).

Betty Muffler (Born in country near Watarru near the border of South and Western Australia, lives and works in Indulkana, South Australia).

Laura is a visual artist working across performance, text, photomedia and moving image. In each instance the work is an interrogation of the chosen medium, often pushing the mode of production and the body’s engagement in this process to a point of exhaustion or collapse. Working with processes of embodiment and repetition, Hindmarsh highlights and questions established hierarchies of representation. Her film and video works have screened at prestigious international festivals including the Edinburgh International Film Festival; Alchemy Film and Moving Image Festival; and the Contact Festival of Experimental Film and Video. Recent exhibitions include Figuratively Speaking, CCP; Primavera 2017, MCA; Passages, Contemporary Art Tasmania; Finding Focus, PhotoAccess; Exhaust, Contemporary Art Tasmania; and ATAVAST, Standard Practice, New York.

Rachael is a rising star of the Ernabella Arts painting studio. She paints the messages and stories she receives through her dreams. Rachael is the third of four generations of Lionel women to work at Ernabella Arts in the Pukatja Community. She began painting at the art centre in 2006, committing to her practice more fully from late 2015. She was a finalist in the 2016 National Aboriginal and Torres Strait Islander Art Awards. Her award entry Kapi Wankanya was acquired by the Museum and Art Gallery of the Northern Territory. Rachael’s paintings have been exhibited at Aboriginal Signature in Brussels, and Harvey Arts, USA and various galleries across Australia, including Outstation Gallery in Darwin, Short Street Gallery, Broome and Alcaston, Melbourne, and in a recent family exhibition at Tunbridge Gallery, Margaret River, featuring three generations of Lionel women. She has four children, one of whom is emerging ceramic artist, Vennita Lionel.

Betty works at Iwantja Arts, in Indulkana Community on the Anangu Pitjantjatjara Yankunytjatjara (APY) Lands in remote north-west South Australia. Betty is a renowned ngangkari (traditional healer) and senior cultural woman. Betty’s artistic practice spans painting and tjanpi (native grass) weaving. A child survivor of the Maralinga bombings, in which she lost her entire family, Betty was rescued by missionaries and raised at the Ernabella mission. Betty learnt her Ngangkari practise from her aunties, handed down through her father’s side. Alongside a rigorous art practice Betty continues to work extensively with NPY Women’s Council and medical practitioners to support Anangu to good health and through times of crisis. Betty won the 2017 NATSIAA Award for emerging art, her paintings have been exhibited extensively, and her work is held in collections throughout Australia.

James is an interdisciplinary artist whose output stretches across drawing, installation, video and performance. James’ video and performance work looks at the processes of collaboration - often involving his family. His work is increasingly focused on decolonial practices. James has been the recipient of the Maddocks Art Prize, the Clitheroe Foundation Scholarship and the Anne & Gordon Samstag International Visual Arts Scholarship which enabled him to study experimental documentary at Union Docs NYC. James has participated in several group exhibitions, festivals and solo exhibitions nationally including Next Wave, PACT, Firstdraft, WestSpace, Feltspace, 4A, Campbelltown Arts Centre and the National Art School Gallery.

Emily Parsons-Lord makes ephemeral installations and performances that are informed by research and critical dialogue with climate sciences, natural history, and politics. Her work attempts to reconcile lofty vast ideas of our place in time and space, with the slippages of the political realities of being a human today. Employing tragi-humour, scale, and performance Emily interrogates the materiality of invisibility, magic, and stories we tell about reality. Emily has exhibited both nationally and internationally and participated in the Create NSW Visual Arts Fellowship (Emerging), 2017; Bristol Biennial – In Other Worlds, 2016; Primavera 2016; Underbelly Arts Festival 2015; 2014 & 15 Proximity Festival; and Firstdraft Sydney, 2015. Emily undertook research at Creative Time in New York; Christmas Island Refugee Detention Centre; and SymbioticA in Perth, WA.

Beyula has been a dedicated member of Papunya Tjupi Arts Aboriginal Corporation since the company’s inception in 2007. She is the daughter of pioneer Papunya Tula painter Limpi Tjapangati, whom she observed painting as a young girl. She later practiced for herself on cardboard. From her father Limpi, Beyula inherited rights to the country near the Murini Range which Beyula often depicted in her early paintings. She also inherited a bushfire story Kali Karringpa from her grandmother and the rights to a dingo dreaming site at Nyumanu near Kintore from her mother. But it is her own dramatic version of the honey grevillea dreaming story inherited from her grandfather to which Beyula dedicates her work. Kalinykalinypa or desert grevillea flower is a bush delicacy for Aboriginal people. Kalinykalinypa grows in the sandy soils on the plains. The beautiful orange coloured flowers are picked early in the morning and placed in a billycan of water to create ‘honeywater’ (cordial), or sucked straight off the branch for their sweet honey dew. Anangu move from flower to flower bending it to them so they can suck the nectar, rather than picking it. Beyula is a key painter at Papunya Tjupi studio. She paints there alongside her husband and traditional owner of Papunya, Bob Dixon Tjupurrula.