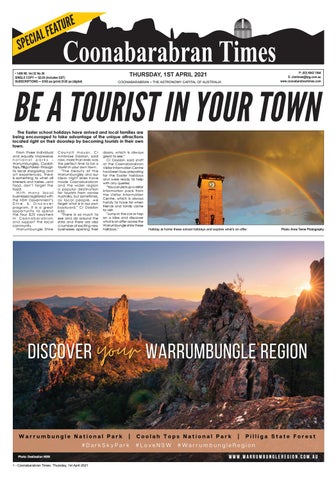 BE A TOURIST IN YOUR TOWN The Easter school holidays have arrived and local families are being encouraged to take advantage of the unique attractions located right on their doorstep by becoming tourists in their own town. From three individual and equally impressive national parks Warrumbungles, Coolah Tops, Pilliga Forest - through to local stargazing and art experiences, there is something to whet all interests and tastes...and food, don’t forget the food! With many local businesses registered with the NSW Government’s Dine & Discover program, it is a great opportunity to spend the four $25 vouchers in Coonabarabran and support the local community. Warrumbungle Shire

C o u n c i l m a y o r, C r Ambrose Doolan, said now, more than ever, was the perfect time to be a tourist in your own town. "The beauty of the Warrumbungles and our clear night skies have made Coonabarabran and the wider region a popular destination for tourists from across Australia, but sometimes, as local people, we forget what is in our own backyard," Cr Doolan said. "There is so much to see and do around the shire and there are also a number of exciting new businesses opening their

doors, which is always great to see." Cr Doolan said staff at the Coonabarabran Visitor Information Centre had been busy preparing for the Easter holidays and were ready to help with any queries. "You can pick up a visitor information pack from the Visitor Information Centre, which is always handy to have for when friends and family come to visit. "Jump in the car or hop on a bike and discover what is on offer across the Warrumbungle shire these holidays."

Holiday at home these school holidays and explore what’s on offer.

COVID’S UNEXPECTED TOURISM BOOM While the COVID-19 pandemic has changed the way the world’s population lives day-to-day, it hasn’t entirely negative in With overseas travel out of the question, Australians have been forced to holiday in their own backyards. Coonabarabran has been no different, with the others trying to avoid highly populated areas. Several local business owners have reaped the area. Milroy Observatory’s Donna Burton has been so inundated with tourists and visitors she has had to seek help to run her business. “It’s picked up so much I had to hire a few helpers,” Mrs Burton said. “I’ve had a couple of youngsters who are back “We’re not getting the international travellers we were getting before COVID, but we’re pretty much all booked out over Easter - which is great.” Ms Burton’s workforce consists of 17 to 23 year-olds and she said she was even looking at providing some traineeships for prospective employees. “If I can offer some traineeships in tour guiding would serve uni students well - during a gap year like that.”

Operator of Milroy Observatory, Donna “the astronomer” Burton, has hired a team of young people to help her cater for the increased demand in astronomy sessions.

THERE’S SOMETHING IN THE PILLIGA by CHRIS WARD north of Coonabarabran, the Pilliga Forests posseses many unique beauties and if you dare to believe the tall tales of some local people, it also holds plenty of secrets. The forest itself is 500,000 hectares of public bushland that was originally home to the Gamilaraay people. Some believe it is also home to the Pilliga Yowie, the Pilliga Princess and the Min Min Lights. The Pilliga was put on the map in 2014 by “There’s Something In The Pilliga” - essential viewing before heading out into the forest. While the movie is many accounts over the years of visitors in the Pilliga coming across the elusive yowie. A simple internet search will provide all the details - backstories, interviews with victims and locations the Yowie

has been spotted. One of the most terrifying anecdotes is a radio interview with a mother who had a run in with the yowie at Hickeys Falls, a popular tourist south of Coonabarabran. The story of the Pilliga Princess, a woman who would regularly travel along the Newell Highway between Narrabri and Coonabarabran, has also become a part of local folklore. It is said the woman would hitchhike along the highway, often getting lifts with truck drivers. One night in 1993 the woman was hit and killed by a truck as she was traversing the the road. There have been many reports from truck drivers and other travellers along the highway who claim to have seen her ghostly highway at night. There’s plenty of stories online about the

appearance of Min Min Lights in and around the Pilliga scrub. One of the many suggestions about the origins of the lights include them being the spirits of past Aboriginal elders. The lights appear at random and behave erratically. Some Indigenous Australians believe the sightings have increased since European settlement. While there are plenty of stories about the secrets of the Pilliga, it is also important to note its natural beauty. There are plenty of things to marvel at, one of which is the Sculptures in the Scrub. The site offers a picnic area, campground and short walking track where visitors can uncover award-winning artwork that celebrates Aboriginal culture and history. About 30 minutes away are the Salt Caves. It is said the caves were once over a kilometre deep, but after collapsing are now only a few feet deep. Alongside the caves of stairs that climb nearly 100 metres above the ground, the reward at the end of the ascent is an impressive 360 degree view of the forest canopy. The view is stunning and illlustrates the density of the forest, along with other local landmarks including the Wa r r u m b u n g l e s a n d Mount Kaputar. Just 40 kilometres away is the small town of Pilliga, home to the hot bore baths. During a devastating drought almost 100 years ago the 180 foot deep bore was dug, which provided water rich in minerals. NOTE: While all Pilliga Forest roads are currently open to the has resulted in some corrugation. Drivers are urged to drive carefully.

There have been numerous sightings of the elusive Pilliga Yowie for decades. 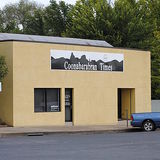 Coonabarabran Times - Be A Tourist In Your Town

Coonabarabran Times - Be A Tourist In Your Town