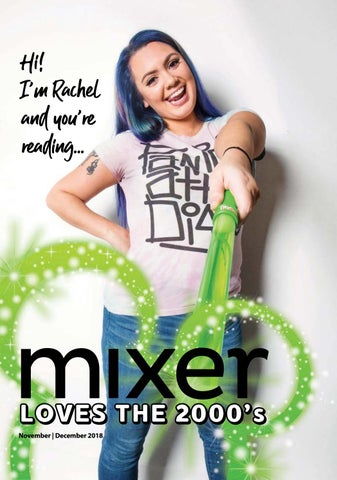 Hello from Mackenzie A while back, I found an old Mixer Magazine titled “Mixer loves the ‘90s.” It was great. I loved reading and reminiscing on all of the wonderful things we all undoubtedly think of when we think of the magical decade -- the fashion (chokers, scrunchies and combat boots), the music (Sublime, Blink 182 and The Spice Girls) and the TV shows (Fresh Prince of Bel Air, Friends, and All That) But, it got me thinking. I would be really pushing it to classify myself as a “90s kid.” I was born in October 1995, so sure, I remember the glory of watching people get slimed on television and Will Smith’s colorful pants, but I was only four years old at the end of it. So I’m not sure I really lived it, like say, my boyfriend, who was born in 1990. I really lived the 2000s. I lived watching High School Musical and obsessing over Troy Bolton (Zanessa 4ever). I lived making sure my MySpace song was up to par (Probably “Say” by John Mayer) and customizing my profile (peep the new picture ;)). I lived taking selfies in my parents full-length bedroom mirror with my BFFAE Jenna whom I often texted “ilysm” from my pink RAZR. ‘90s kids love to say they had the best childhoods. And while they may have Clueless, that’s got nothin’ on Legally Blonde. They can keep Justin Timberlake, well -- actually, umm, can we all have JT?

After going down memory lane for this issue, I’d say the 2000s were da bomb. Oﬀ the chain. Saaweet. Dare I say it… Fetch.

Visit us online at www.reflector.com/mixer

You knew Drake as Jimmy Brooks, the guy in wheelchair from Degrassi, not as, well, Drake.

Ashley, do you love me?! Are you riding?!

you still have marks on your ankles from your razor scooter

You had a crush on a Jonas Brother -- and probably had arguments about which one was the cutest.

You took selfies in mirrors -- or worse -- by flipping the phone around on your brand new pink RAZR.

Forget Pokemon. All you ever wanted was a Blue-Eyes White Dragon.

You couldn’t get oﬀ the computer until you took care of your 9 Neopets. Or you skied down one more black mountain on Club Penguin.

You’d spend all day at school with your friends only to go home to chat with them on AIM until you went to sleep. Oh, and you had a screen name and profile that perfectly represented who you were.

Surferchik03: brb have to feed my neopets RadDude42: Okay. TTYL.

It was arguably the BEST Disney Channel...ever. That’s So Raven, Hannah Montana, The Suite Life of Zack and Cody, Wizards of Waverly Place.

Speaking of Hannah Montana, you remember when Miley Cyrus looked like THIS

Nickelodeon was great, too: Spongebob, Drake and Josh, Rugrats in Paris, The Fairly Odd Parents, Zoey 101. I mean, come on. YOU KNOW YOU WISH YOU HAD...

MTV was also at it’s prime. Welcome to my crib.

“HUG ME, BROTHA” made you laugh.

you wished you had super powers like the power puďŹ&amp;#x20AC;s

You shipped harder than ever before. Team Nathan or Team Lucas? Team Jacob or Team Edward?

You wanted to live in space with Zenon

You would have voted for Pedro

You wished Hogwarts was real.

You spent hours customizing your MySpace page -- changing your “Top 8” and picking the perfect song.

You had a friend whose “song” with her boyfriend was You and Me by Lifehouse.

You wanted to know what the famous JAWBREAKER tasted like on Ed, Edd, ‘N Eddy

You were addicted to building Yourself on The Sims

You were super stoked when Lizzie -McGuire went to Rome. It was what dreams were made of.

2000’s WE ALL REMEMBER GETTING HOME FROM SCHOOL AND FINDING OUR FAVORITE SHOWS.... AFTER WE LOGGED INTO AIM AND CHATTED FOR A WHILE OF COURSE!

For more information or to register contact: Wendy Dunbar at 252-493-7528 or wdunbar@email.pittcc.edu

HUNGRY? PRESSED FOR TIME? LET US BRING DINNER TO YOU! Partnered with 30+ Restaurants in Greenville To try out Takeout Pros for yourself, use coupon code: MIXER11 on your next order and get $2.99 off. You better hurry because this offer expires December 31, 2018. For Faster Ordering, Download the App! To learn more, go to our website, www.takeoutpros.com or call 252-762-3289

® Any delivery charge is not a tip paid to your driver. Our drivers carry less than $20. You must ask for this limited time offer. Minimum purchase required for delivery. Prices, participation, delivery area and charges may vary. ©2018 Domino’s IP Holder LLC. Domino’s®, Domino’s Pizza® and the modular logo are registered trademarks of Domino’s IP LLC.

JOIN THE BUSINESSES OF UPTOWN AS THE SEASONS BEGIN TO CHANGE. NEW MENUS, HOLIDAYS SALES, AND FANTASTIC EXPERIENCES AWAIT!

For inclusion in the calendar, please email live events to:

Feel the 2000's nostalgia with the November/December issue of mixer magazine. Mixer Magazine is Published by The Daily Reflector, Adams Publishing Group of Eastern North Carolina. Read more at www.reflector.com