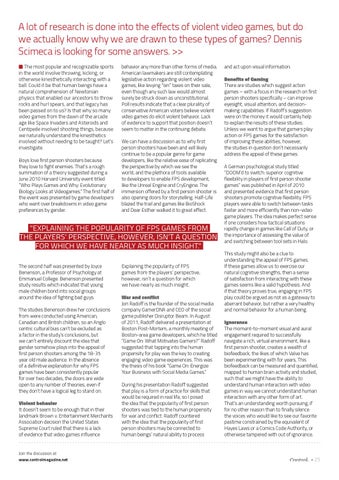 A lot of research is done into the effects of violent video games, but do we actually know why we are drawn to these types of games? Dennis Scimeca is looking for some answers. &gt;&gt; The most popular and recognizable sports in the world involve throwing, kicking, or otherwise kinesthetically interacting with a ball. Could it be that human beings have a natural comprehension of Newtonian physics that enabled our ancestors to throw rocks and hurl spears, and that legacy has been passed on to us? Is that why so many video games from the dawn of the arcade age like Space Invaders and Asteroids and Centipede involved shooting things, because we naturally understand the kinesthetics involved without needing to be taught? Let’s investigate. Boys love first person shooters because they love to fight enemies. That’s a rough summation of a theory suggested during a June 2010 Harvard University event titled “Who Plays Games and Why: Evolutionary Biology Looks at Videogames.” The first half of the event was presented by game developers who went over breakdowns in video game preferences by gender.

behavior any more than other forms of media. American lawmakers are still contemplating legislative action regarding violent video games, like levying “sin” taxes on their sale, even though any such law would almost surely be struck down as unconstitutional. Poll results indicate that a clear plurality of conservative American voters believe violent video games do elicit violent behavior. Lack of evidence to support that position doesn’t seem to matter in the continuing debate. We can have a discussion as to why first person shooters have been and will likely continue to be a popular genre for game developers, like the relative ease of replicating the perspective by which we see the world, and the plethora of tools available to developers to enable FPS development, like the Unreal Engine and CryEngine. The immersion offered by a first person shooter is also opening doors for storytelling. Half-Life blazed the trail and games like BioShock and Dear Esther walked it to great effect.

&quot;EXPLAINING THE POPULARITY OF FPS GAMES FROM THE PLAYERS’ PERSPECTIVE, HOWEVER, ISN’T A QUESTION FOR WHICH WE HAVE NEARLY AS MUCH INSIGHT.&quot; The second half was presented by Joyce Benenson, a Professor of Psychology at Emmanuel College. Benenson presented study results which indicated that young male children bond into social groups around the idea of fighting bad guys. The studies Benenson drew her conclusions from were conducted using American, Canadian and British children, so an Anglo centric cultural bias can’t be excluded as a factor in the study’s conclusions, but we can’t entirely discount the idea that gender somehow plays into the appeal of first person shooters among the 18-35 year old male audience. In the absence of a definitive explanation for why FPS games have been consistently popular for over two decades, the doors are wide open to any number of theories, even if they don’t have a logical leg to stand on. Violent behavior It doesn’t seem to be enough that in their landmark Brown v. Entertainment Merchants Association decision the United States Supreme Court ruled that there is a lack of evidence that video games influence Join the discussion at www.controlmagazine.net

Explaining the popularity of FPS games from the players’ perspective, however, isn’t a question for which we have nearly as much insight. War and conflict Jon Radoff is the founder of the social media company GamerDNA and CEO of the social game publisher Disruptor Beam. In August of 2011, Radoff delivered a presentation at Boston Post-Mortem, a monthly meeting of Boston-area game developers, which he titled “Game On: What Motivates Gamers?” Radoff suggested that tapping into the human propensity for play was the key to creating engaging video game experiences. This was the thesis of his book “Game On: Energize Your Business with Social Media Games.” During his presentation Radoff suggested that play is a form of practice for skills that would be required in real life, so I posed the idea that the popularity of first person shooters was tied to the human propensity for war and conflict. Radoff countered with the idea that the popularity of first person shooters may be connected to human beings’ natural ability to process

and act upon visual information. Benefits of Gaming There are studies which suggest action games – with a focus in the research on first person shooters specifically – can improve eyesight, visual attention, and decisionmaking capabilities. If Radoff’s suggestion were on the money it would certainly help to explain the results of these studies. Unless we want to argue that gamers play action or FPS games for the satisfaction of improving these abilities, however, the studies in question don’t necessarily address the appeal of these games. A German psychological study titled “DOOM’d to switch: superior cognitive flexibility in players of first person shooter games” was published in April of 2010 and presented evidence that first person shooters promote cognitive flexibility. FPS players were able to switch between tasks faster and more efficiently than non-video game players. The idea makes perfect sense if one considers how tactical situations rapidly change in games like Call of Duty, or the importance of assessing the value of and switching between tool sets in Halo. This study might also be a clue to understanding the appeal of FPS games. If these games allow us to exercise our natural cognitive strengths, then a sense of satisfaction from interacting with these games seems like a valid hypothesis. And if that theory proves true, engaging in FPS play could be argued as not as a gateway to aberrant behavior, but rather a very healthy and normal behavior for a human being. Ignorance The moment-to-moment visual and aural engagement required to successfully navigate a rich, virtual environment, like a first person shooter, creates a wealth of biofeedback, the likes of which Valve has been experimenting with for years, This biofeedback can be measured and quantified, mapped to human brain activity and studied, such that we might have the ability to understand human interaction with video games in way we cannot understand human interaction with any other form of art. That’s an understanding worth pursuing, if for no other reason than to finally silence the voices who would like to see our favorite pastime constrained by the equivalent of Hayes Laws or a Comics Code Authority, or otherwise tampered with out of ignorance.

Magazine about game development! • Game Mechanics • No Entry for IGF-finalist from Iran • FPS: Why do we Kill?• The Changing Nature of Storytelling • Bringing Tomb Raider to PC & PS3 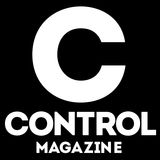