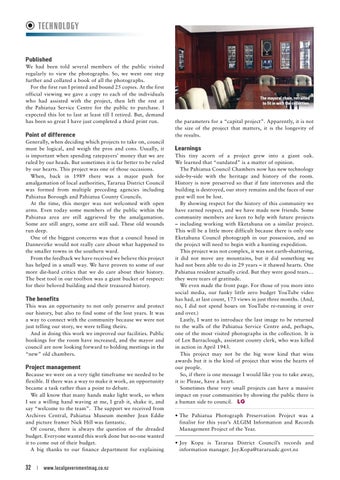 TECHNOLOGY Published We had been told several members of the public visited regularly to view the photographs. So, we went one step further and collated a book of all the photographs. For the first run I printed and bound 25 copies. At the first official viewing we gave a copy to each of the individuals who had assisted with the project, then left the rest at the Pahiatua Service Centre for the public to purchase. I expected this lot to last at least till I retired. But, demand has been so great I have just completed a third print run.

Point of difference Generally, when deciding which projects to take on, council must be logical, and weigh the pros and cons. Usually, it is important when spending ratepayers’ money that we are ruled by our heads. But sometimes it is far better to be ruled by our hearts. This project was one of those occasions. When, back in 1989 there was a major push for amalgamation of local authorities, Tararua District Council was formed from multiple preceding agencies including Pahiatua Borough and Pahiatua County Councils. At the time, this merger was not welcomed with open arms. Even today some members of the public within the Pahiatua area are still aggrieved by the amalgamation. Some are still angry, some are still sad. These old wounds run deep. One of the biggest concerns was that a council based in Dannevirke would not really care about what happened to the smaller towns in the southern ward. From the feedback we have received we believe this project has helped in a small way. We have proven to some of our more die-hard critics that we do care about their history. The best tool in our toolbox was a giant bucket of respect: for their beloved building and their treasured history.

The benefits This was an opportunity to not only preserve and protect our history, but also to find some of the lost years. It was a way to connect with the community because we were not just telling our story, we were telling theirs. And in doing this work we improved our facilities. Public bookings for the room have increased, and the mayor and council are now looking forward to holding meetings in the “new” old chambers.

Project management Because we were on a very tight timeframe we needed to be flexible. If there was a way to make it work, an opportunity became a task rather than a point to debate. We all know that many hands make light work, so when I see a willing hand waving at me, I grab it, shake it, and say “welcome to the team”. The support we received from Archives Central, Pahiatua Museum member Jean Eddie and picture framer Nick Hill was fantastic. Of course, there is always the question of the dreaded budget. Everyone wanted this work done but no-one wanted it to come out of their budget. A big thanks to our finance department for explaining

The mayoral chain, reframed to fit in with the collection.

the parameters for a “capital project”. Apparently, it is not the size of the project that matters, it is the longevity of the results.

Learnings This tiny acorn of a project grew into a giant oak. We learned that “outdated” is a matter of opinion. The Pahiatua Council Chambers now has new technology side-by-side with the heritage and history of the room. History is now preserved so that if fate intervenes and the building is destroyed, our story remains and the faces of our past will not be lost. By showing respect for the history of this community we have earned respect, and we have made new friends. Some community members are keen to help with future projects – including working with Eketahuna on a similar project. This will be a little more difficult because there is only one Eketahuna Council photograph in our possession, and so the project will need to begin with a hunting expedition. This project was not complex, it was not earth-shattering, it did not move any mountains, but it did something we had not been able to do in 29 years – it thawed hearts. One Pahiatua resident actually cried. But they were good tears… they were tears of gratitude. We even made the front page. For those of you more into social media, our funky little zero budget YouTube video has had, at last count, 173 views in just three months. (And, no, I did not spend hours on YouTube re-running it over and over.) Lastly, I want to introduce the last image to be returned to the walls of the Pahiatua Service Centre and, perhaps, one of the most visited photographs in the collection. It is of Len Barraclough, assistant county clerk, who was killed in action in April 1943. This project may not be the big wow kind that wins awards but it is the kind of project that wins the hearts of our people. So, if there is one message I would like you to take away, it is: Please, have a heart. Sometimes these very small projects can have a massive impact on your communities by showing the public there is a human side to council. LG •T he Pahiatua Photograph Preservation Project was a finalist for this year’s ALGIM Information and Records Management Project of the Year. • J oy Kopa is Tararua District Council’s records and information manager. Joy.Kopa@tararuadc.govt.nz 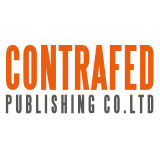