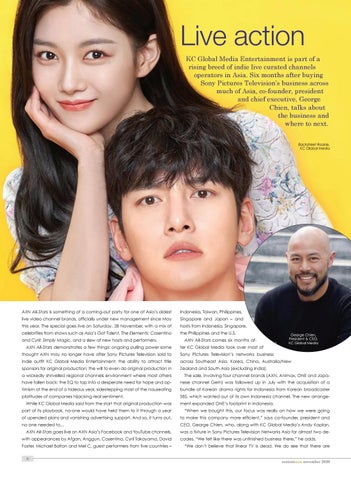 Live action KC Global Media Entertainment is part of a rising breed of indie live curated channels operators in Asia. Six months after buying Sony Pictures Television’s business across much of Asia, co-founder, president and chief executive, George Chien, talks about the business and where to next. Backstreet Rookie, KC Global Media

live video channel brands, officially under new management since May

Singapore and Japan – and

this year. The special goes live on Saturday, 28 November, with a mix of

celebrities from shows such as Asia’s Got Talent, The Elements: Cosentino

the Philippines and the U.S.

and Cyril: Simply Magic, and a slew of new hosts and performers. AXN All-Stars demonstrates a few things: ongoing pulling power some

a wickedly shrivelled regional channels environment where most others

have fallen back; the EQ to tap into a desperate need for hope and op-

timism at the end of a hideous year, sidestepping most of the nauseating

bundle of Korean drama rights for Indonesia from Korean broadcaster

SBS, which wanted out of its own Indonesia channel. The new arrange-

part of its playbook, no-one would have held them to it through a year

“When we bought this, our focus was really on how we were going

of upended plans and vanishing advertising support. And so, it turns out,

to make this company more efficient,” says co-founder, president and

was a fixture in Sony Pictures Television Networks Asia for almost two decades. “We felt like there was unfinished business there,” he adds. “We don’t believe that linear TV is dead. We do see that there are contentasia november 2020 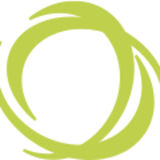