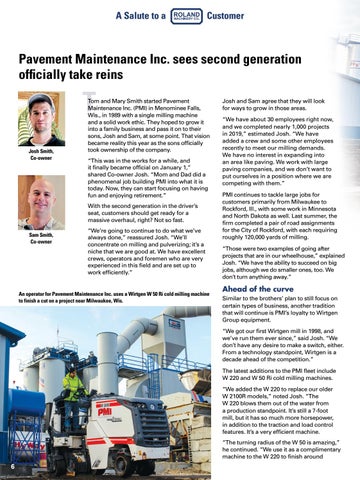 A Salute to a

Tom and Mary Smith started Pavement Maintenance Inc. (PMI) in Menominee Falls, Wis., in 1989 with a single milling machine and a solid work ethic. They hoped to grow it into a family business and pass it on to their sons, Josh and Sam, at some point. That vision became reality this year as the sons officially took ownership of the company. “This was in the works for a while, and it finally became official on January 1,” shared Co-owner Josh. “Mom and Dad did a phenomenal job building PMI into what it is today. Now, they can start focusing on having fun and enjoying retirement.” With the second generation in the driver’s seat, customers should get ready for a massive overhaul, right? Not so fast.

“We’re going to continue to do what we’ve always done,” reassured Josh. “We’ll concentrate on milling and pulverizing; it’s a niche that we are good at. We have excellent crews, operators and foremen who are very experienced in this field and are set up to work efficiently.”

An operator for Pavement Maintenance Inc. uses a Wirtgen W 50 Ri cold milling machine to finish a cut on a project near Milwaukee, Wis.

Josh and Sam agree that they will look for ways to grow in those areas. “We have about 30 employees right now, and we completed nearly 1,000 projects in 2019,” estimated Josh. “We have added a crew and some other employees recently to meet our milling demands. We have no interest in expanding into an area like paving. We work with large paving companies, and we don’t want to put ourselves in a position where we are competing with them.” PMI continues to tackle large jobs for customers primarily from Milwaukee to Rockford, Ill., with some work in Minnesota and North Dakota as well. Last summer, the firm completed a pair of road assignments for the City of Rockford, with each requiring roughly 120,000 yards of milling. “Those were two examples of going after projects that are in our wheelhouse,” explained Josh. “We have the ability to succeed on big jobs, although we do smaller ones, too. We don’t turn anything away.”

Ahead of the curve Similar to the brothers’ plan to still focus on certain types of business, another tradition that will continue is PMI’s loyalty to Wirtgen Group equipment. “We got our first Wirtgen mill in 1998, and we’ve run them ever since,” said Josh. “We don’t have any desire to make a switch, either. From a technology standpoint, Wirtgen is a decade ahead of the competition.” The latest additions to the PMI fleet include W 220 and W 50 Ri cold milling machines. “We added the W 220 to replace our older W 2100R models,” noted Josh. “The W 220 blows them out of the water from a production standpoint. It’s still a 7-foot mill, but it has so much more horsepower, in addition to the traction and load control features. It’s a very efficient machine. “The turning radius of the W 50 is amazing,” he continued. “We use it as a complimentary machine to the W 220 to finish around 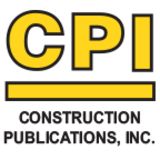 -Get to know the Wisconsin father and son who specialize in water-management projects a George's Grading & Son. -Visit Pavement Maintenance...

-Get to know the Wisconsin father and son who specialize in water-management projects a George's Grading & Son. -Visit Pavement Maintenance...