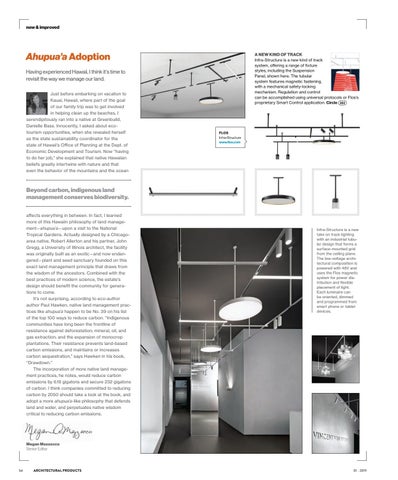 A NEW KIND OF TRACK Infra-Structure is a new kind of track system, offering a range of fixture styles, including the Suspension Panel, shown here. The tubular system features magnetic fastening, with a mechanical safety-locking mechanism. Regulation and control can be accomplished using universal protocols or Flos’s proprietary Smart Control application. Circle 382

Having experienced Hawaii, I think it’s time to revisit the way we manage our land. Just before embarking on vacation to Kauai, Hawaii, where part of the goal of our family trip was to get involved in helping clean up the beaches, I serendipitously ran into a native at Greenbuild, Danielle Bass. Innocently, I asked about ecotourism opportunities, when she revealed herself as the state sustainability coordinator for the state of Hawaii’s Office of Planning at the Dept. of Economic Development and Tourism. Now “having to do her job,” she explained that native Hawaiian beliefs greatly intertwine with nature and that even the behavior of the mountains and the ocean

Beyond carbon, indigenous land management conserves biodiversity. affects everything in between. In fact, I learned more of this Hawaiin philosophy of land management—ahupua’a—upon a visit to the National Tropical Gardens. Actually designed by a Chicagoarea native, Robert Allerton and his partner, John Gregg, a University of Illinois architect, the facility was originally built as an exotic—and now endangered—plant and seed sanctuary founded on this exact land management principle that draws from the wisdom of the ancestors. Combined with the best practices of modern science, the estate’s design should benefit the community for generations to come. It’s not surprising, according to eco-author author Paul Hawken, native land management practices like ahupua’a happen to be No. 39 on his list of the top 100 ways to reduce carbon. “Indigenous communities have long been the frontline of resistance against deforestation; mineral, oil, and gas extraction; and the expansion of monocrop plantations. Their resistance prevents land-based carbon emissions, and maintains or increases carbon sequestration,” says Hawken in his book, “Drawdown.” The incorporation of more native land management practices, he notes, would reduce carbon emissions by 6.19 gigatons and secure 232 gigatons of carbon. I think companies committed to reducing carbon by 2050 should take a look at the book, and adopt a more ahupua’a-like philosophy that defends land and water, and perpetuates native wisdom critical to reducing carbon emissions.

Infra-Structure is a new take on track lighting with an industrial tubular design that forms a surface-mounted grid from the ceiling plane. The low-voltage architectural composition is powered with 48V and uses the Flos magnetic system for power distribution and flexible placement of light. Each luminaire can be oriented, dimmed and programmed from smart phone or tablet devices.

The product publication of the U.S. architectural market. 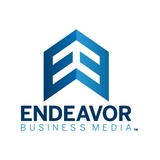