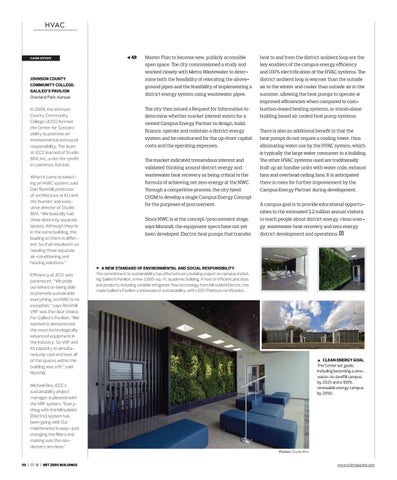 Master Plan to become new, publicly accessible open space. The city commissioned a study and worked closely with Metro Wastewater to determine both the feasibility of relocating the aboveground pipes and the feasibility of implementing a district energy system using wastewater pipes. The city then issued a Request for Information to determine whether market interest exists for a vested Campus Energy Partner to design, build, finance, operate and maintain a district energy system and be reimbursed for the up-front capital costs and the operating expenses.

In 2009, the Johnson County Community College (JCCC) formed the Center for Sustainability to promote an environmental and social responsibility. The team at JCCC learned of Studio 804, Inc., a not-for-profit in Lawrence, Kansas.

The market indicated tremendous interest and validated thinking around district energy and wastewater heat recovery as being critical to the formula of achieving net zero energy at the NWC. Through a competitive process, the city hired CH2M to develop a single Campus Energy Concept for the purposes of procurement.

When it came to selecting an HVAC system, said Dan Rockhill, professor of architecture at KU and the founder and executive director of Studio 804, “We basically had three distinctly separate spaces. Although they’re in the same building, the loading on them is different. So that resulted in us needing three separate air-conditioning and heating solutions.”

Since NWC is at the concept/procurement stage, says Morandi, the equipment specs have not yet been developed. Electric heat pumps that transfer

heat to and from the district ambient loop are the key enablers of the campus energy efficiency and 100% electrification of the HVAC systems. The district ambient loop is warmer than the outside air in the winter and cooler than outside air in the summer, allowing the heat pumps to operate at improved efficiencies when compared to combustion-based heating systems, or stand-alone building based air cooled heat pump systems. There is also an additional benefit in that the heat pumps do not require a cooling tower, thus eliminating water use by the HVAC system, which is typically the large water consumer in a building. The other HVAC systems used are traditionally built up air handler units with water coils, exhaust fans and overhead ceiling fans. It is anticipated there is room for further improvement by the Campus Energy Partner during development. A campus goal is to provide educational opportunities to the estimated 2.2 million annual visitors; to teach people about district energy, clean energy, wastewater heat recovery and zero energy district development and operations.

A NEW STANDARD OF ENVIRONMENTAL AND SOCIAL RESPONSIBILITY The commitment to sustainability has affected every building project on campus, including Galileo’s Pavilion, a new 3,000-sq.-ft. academic building, A host of efficient practices and products, including variable refrigerant flow technology from Mitsubishi Electric, has made Galileo’s Pavilion a showcase of sustainability, with LEED Platinum certification.

Efficiency at JCCC was paramount, “We pride ourselves on being able to promote sustainable everything, so HVAC is no exception,” says Rockhill. VRF was the clear choice. For Galileo’s Pavilion, “We wanted to demonstrate the most technologically advanced equipment in the industry. So VRF and its capacity to simultaneously cool and heat all of the spaces within the building was a fit,” said Rockhill.

CLEAN ENERGY GOAL The Center set goals, including becoming a zerowaste-to-landfill campus by 2025 and a 100% renewable energy campus by 2050.

Michael Rea, JCCC’s sustainability project manager, is pleased with the VRF system, “Everything with the Mitsubishi [Electric] system has been going well. Our maintenance is easy—just changing the filters and making sure the condensers are clean.” Photos: Studio 804 50 | 07.18 | NET ZERO BUILDINGS