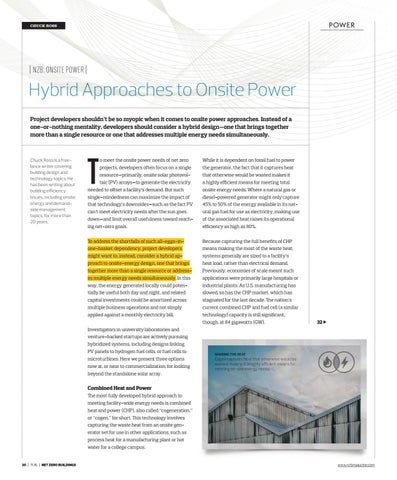 Hybrid Approaches to Onsite Power Project developers shouldn’t be so myopic when it comes to onsite power approaches. Instead of a one-or-nothing mentality, developers should consider a hybrid design—one that brings together more than a single resource or one that addresses multiple energy needs simultaneously.

Chuck Ross is a freelance writer covering building design and technology topics. He has been writing about building efficiency issues, including onsite energy and demandside management topics, for more than 20 years.

While it is dependent on fossil fuel to power the generator, the fact that it captures heat that otherwise would be wasted makes it a highly efficient means for meeting total onsite energy needs. Where a natural gas or diesel-powered generator might only capture 45% to 50% of the energy available in its natural gas fuel for use as electricity, making use of the associated heat raises its operational efficiency as high as 80%.

To address the shortfalls of such all-eggs-inone-basket dependency, project developers might want to, instead, consider a hybrid approach to onsite-energy design, one that brings together more than a single resource or addresses multiple energy needs simultaneously. In this way, the energy generated locally could potentially be useful both day and night, and related capital investments could be amortized across multiple business operations and not simply applied against a monthly electricity bill.

Because capturing the full benefits of CHP means making the most of the waste heat, systems generally are sized to a facility’s heat load, rather than electrical demand. Previously, economies of scale meant such applications were primarily large hospitals or industrial plants. As U.S. manufacturing has slowed, so has the CHP market, which has stagnated for the last decade. The nation’s current combined CHP and fuel cell (a similar technology) capacity is still significant, though, at 84 gigawatts (GW).

Investigators in university laboratories and venture-backed startups are actively pursuing hybridized systems, including designs linking PV panels to hydrogen fuel cells, or fuel cells to microturbines. Here we present three options now at, or near to commercialization, for looking beyond the standalone solar array.

Cogen captures heat that otherwise would be wasted, making it a highly efficient means for meeting on-site energy needs.

Combined Heat and Power The most fully developed hybrid approach to meeting facility-wide energy needs is combined heat and power (CHP), also called “cogeneration,” or “cogen,” for short. This technology involves capturing the waste heat from an onsite generator set for use in other applications, such as process heat for a manufacturing plant or hot water for a college campus.