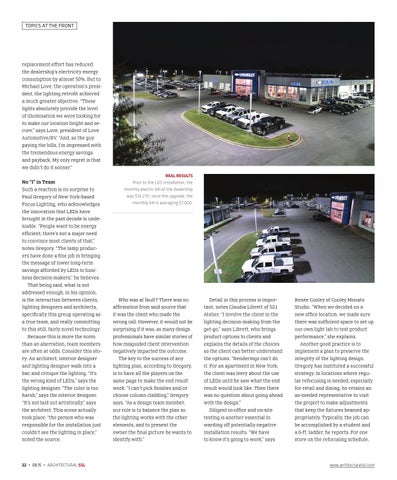 TOPICS AT THE FRONT

replacement effort has reduced the dealership’s electricity energy consumption by almost 50%. But to Michael Love, the operation’s president, the lighting retrofit achieved a much greater objective. “These lights absolutely provide the level of illumination we were looking for to make our location bright and secure,” says Love, president of Love Automotive/RV. “And, as the guy paying the bills, I’m impressed with the tremendous energy savings and payback. My only regret is that we didn’t do it sooner.” REAL RESULTS

No “I” in Team Such a reaction is no surprise to Paul Gregory of New York-based Focus Lighting, who acknowledges

Prior to the LED installation, the monthly electric bill at the dealership was $14,270; since the upgrade, the monthly bill is averaging $7,000.

the innovation that LEDs have brought in the past decade is undeniable. “People want to be energy efficient; there’s not a major need to convince most clients of that,” notes Gregory. “The lamp producers have done a fine job in bringing the message of lower long-term savings afforded by LEDs to business decision-makers,” he believes. That being said, what is not addressed enough, in his opinion, is the interaction between clients,

Who was at fault? There was no

Detail in this process is impor-

affirmation from said source that

Studio. “When we decided on a

specifically this group operating as

it was the client who made the

Atelier. “I involve the client in the

new office location, we made sure

a true team, and really committing

wrong call. However, it would not be

lighting decision-making from the

there was sufficient space to set up

to this still, fairly novel technology.

surprising if it was, as many design

our own light lab to test product

Because this is more the norm

professionals have similar stories of

product options to clients and

than an aberration, team members

explains the details of the choices

are often at odds. Consider this sto-

so the client can better understand

implement a plan to preserve the

Another good practice is to

the options. “Renderings can’t do

integrity of the lighting design.

and lighting designer walk into a

lighting plan, according to Gregory,

it. For an apartment in New York,

Gregory has instituted a successful

bar, and critique the lighting. “It’s

is to have all the players on the

the client was leery about the use

strategy: In locations where regu-

the wrong kind of LEDs,” says the

of LEDs until he saw what the end

lighting designer. “The color is too

work. “I can’t pick finishes and/or

for retail and dining, he retains an

was no question about going ahead

“It’s not laid out artistically,” says

says. “As a design team member,

the project to make adjustments

the architect. This scene actually

our role is to balance the plan so

took place: “the person who was

the lighting works with the other

testing is another essential in

propriately. Typically, the job can

responsible for the installation just

elements, and to present the

be accomplished by a student and

couldn’t see the lighting in place,”

owner the final picture he wants to

installation results. “We have

store on the refocusing schedule,

The key to the success of any

that keep the fixtures beamed ap-