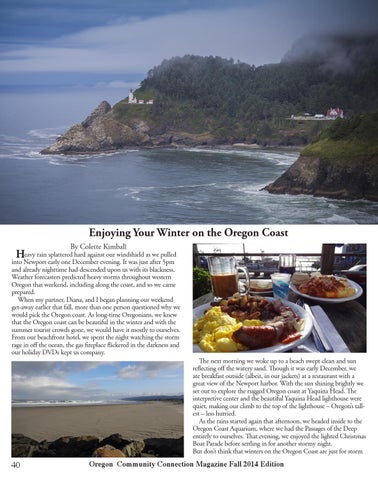 Enjoying Your Winter on the Oregon Coast By Colette Kimball

Heavy rain splattered hard against our windshield as we pulled

into Newport early one December evening. It was just after 5pm and already nighttime had descended upon us with its blackness. Weather forecasters predicted heavy storms throughout western Oregon that weekend, including along the coast, and so we came prepared. When my partner, Diana, and I began planning our weekend get-away earlier that fall, more than one person questioned why we would pick the Oregon coast. As long-time Oregonians, we knew that the Oregon coast can be beautiful in the winter and with the summer tourist crowds gone, we would have it mostly to ourselves. From our beachfront hotel, we spent the night watching the storm rage in off the ocean, the gas fireplace flickered in the darkness and our holiday DVDs kept us company.

The next morning we woke up to a beach swept clean and sun reflecting off the watery sand. Though it was early December, we ate breakfast outside (albeit, in our jackets) at a restaurant with a great view of the Newport harbor. With the sun shining brightly we set out to explore the rugged Oregon coast at Yaquina Head. The interpretive center and the beautiful Yaquina Head lighthouse were quiet, making our climb to the top of the lighthouse – Oregon’s tallest – less hurried. As the rains started again that afternoon, we headed inside to the Oregon Coast Aquarium, where we had the Passages of the Deep entirely to ourselves. That evening, we enjoyed the lighted Christmas Boat Parade before settling in for another stormy night. But don’t think that winters on the Oregon Coast are just for storm