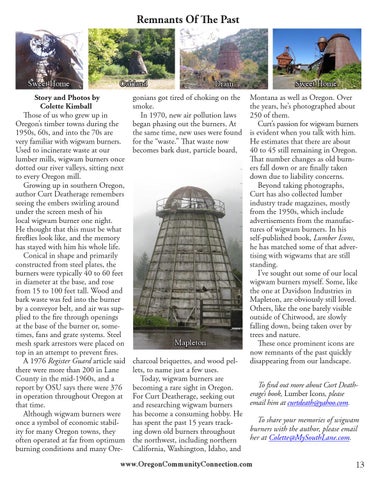 Remnants Of The Past

Story and Photos by Colette Kimball Those of us who grew up in Oregon’s timber towns during the 1950s, 60s, and into the 70s are very familiar with wigwam burners. Used to incinerate waste at our lumber mills, wigwam burners once dotted our river valleys, sitting next to every Oregon mill. Growing up in southern Oregon, author Curt Deatherage remembers seeing the embers swirling around under the screen mesh of his local wigwam burner one night. He thought that this must be what fireflies look like, and the memory has stayed with him his whole life. Conical in shape and primarily constructed from steel plates, the burners were typically 40 to 60 feet in diameter at the base, and rose from 15 to 100 feet tall. Wood and bark waste was fed into the burner by a conveyor belt, and air was supplied to the fire through openings at the base of the burner or, sometimes, fans and grate systems. Steel mesh spark arrestors were placed on top in an attempt to prevent fires. A 1976 Register Guard article said there were more than 200 in Lane County in the mid-1960s, and a report by OSU says there were 376 in operation throughout Oregon at that time. Although wigwam burners were once a symbol of economic stability for many Oregon towns, they often operated at far from optimum burning conditions and many Ore-

gonians got tired of choking on the smoke. In 1970, new air pollution laws began phasing out the burners. At the same time, new uses were found for the “waste.” That waste now becomes bark dust, particle board,

Mapleton charcoal briquettes, and wood pellets, to name just a few uses. Today, wigwam burners are becoming a rare sight in Oregon. For Curt Deatherage, seeking out and researching wigwam burners has become a consuming hobby. He has spent the past 15 years tracking down old burners throughout the northwest, including northern California, Washington, Idaho, and

Sweet Home Montana as well as Oregon. Over the years, he’s photographed about 250 of them. Curt’s passion for wigwam burners is evident when you talk with him. He estimates that there are about 40 to 45 still remaining in Oregon. That number changes as old burners fall down or are finally taken down due to liability concerns. Beyond taking photographs, Curt has also collected lumber industry trade magazines, mostly from the 1950s, which include advertisements from the manufactures of wigwam burners. In his self-published book, Lumber Icons, he has matched some of that advertising with wigwams that are still standing. I’ve sought out some of our local wigwam burners myself. Some, like the one at Davidson Industries in Mapleton, are obviously still loved. Others, like the one barely visible outside of Chitwood, are slowly falling down, being taken over by trees and nature. These once prominent icons are now remnants of the past quickly disappearing from our landscape. To find out more about Curt Deatherage’s book, Lumber Icons, please email him at curtdeath@yahoo.com. To share your memories of wigwam burners with the author, please email her at Colette@MySouthLane.com.